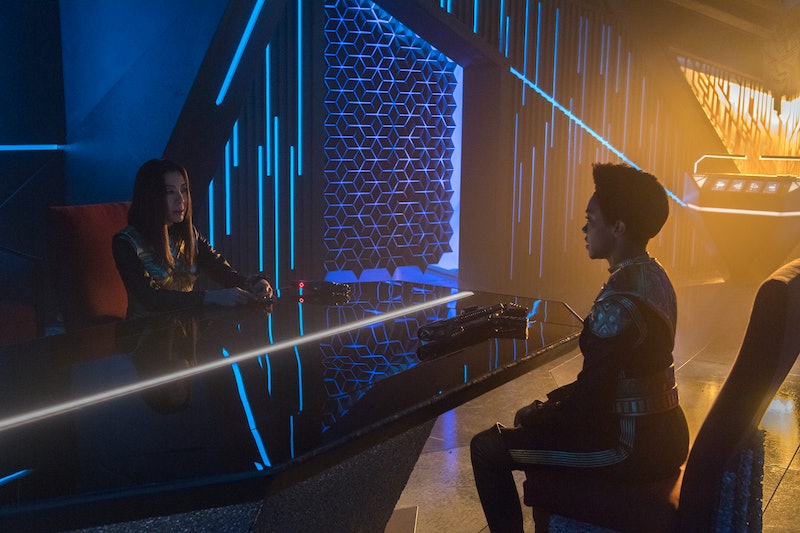 The first half of Star Trek: Discovery was a good introduction to a new Star Trek series and its characters. But the second half has been a wild and exciting ride through the Mirror Universe that can definitely be labeled as some of the best episodes of the entire franchise. And while the first half may have been a bit of a disappointment for fans of some of the show's female characters, the back end has proven that, despite some doubts, Star Trek: Discovery has actually been super feminist all along, and that the show has been setting up a kind of long con against its less liked plot points.

When Discovery first premiered, it had been talked up for months as an incredibly progressive version of Trek that would be more inclusive in its characters and storylines. The lead, Michael Burnham (Sonequa Martin-Green) was a woman of color! Her captain, Phillipa Georgiou (Michelle Yeoh), was another woman of color! But by the conclusion of the series' two-part premiere, Captain Georgiou was dead, Burnham was heading to serve a life sentence for mutiny, and the Discovery's captain was revealed as Gabriel Lorca (Jason Isaacs). Another white dude captaining a Trek ship wasn't exactly revolutionary.

But as it turns out, the whole existence of Lorca on the Discovery was a type of long con the show has been running all season. Lorca as we know him was revealed as the Lorca from the Mirror Universe who was using Discovery's spore drive to get back to his own galaxy and stage a coup against the Emperor of the Terran Empire, who turned out to be... Georgiou! That the supreme leader of an entire galactic empire is a woman of color is a major plus for a television show, even for one that falls into sci-fi's more progressive tendencies like Star Trek. Losing Georgiou/Yeoh in the first half was a major bummer, so having her back, even in a different way, feels like it's supporting Discovery's initial intentions.

Small hints at Lorca's true nature were evident all along during the first half of the show. The humans of the Mirror Universe have always believed that anyone could stab them in the back at any moment, so Lorca's paranoia makes so much more sense now, as does his preference for Starfleet's military achievements rather than exploration, his refusal to follow orders, and his scar-covered back. What seemed like strange personality quirks of an unstable man were actually incredibly intentional.

The parallels to today's political climate don't sound accidental, either. The Terran Empire's xenophobia and authoritarian nature certainly reflect current American leadership. As Isaacs told BuzzFeed, he wanted to emulate the president. "I wanted to say something about Trump," he said. "The only reason to do [Star Trek] again was to tell a story that has some modern resonance. It's such a horribly, unbelievably decisive time — to be part of a story that explores that makes it a very unusual experience." Isaacs connecting Lorca to an administration that disrespects women, among others, to such levels definitely gives Lorca a symbolism that cannot be denied.

And when you think about it, Mirror Lorca's actions are decidedly misogynistic from the beginning. He essentially kidnapped Burnham from her prison transport because he was in a type of creepy, grooming, father-figure-turned-romantic sexual relationship with the Burnham from his universe. That he felt that he could simply take ownership of the Prime universe's Burnham, groom her as well, and convince her to join his cause is a level of presumptuousness that only comes with extreme disregard for women's own agency. Add to that the fact that Lorca is white and Burnham a black woman, and even more reprehensible layers of the character were achieved. Which is why it was so satisfying then, that a bunch of women, a gay man, and a super empathetic Kelpian teamed up to bring Lorca down.

One of those women seemed destined to grow from the start. When Cadet Tilly (Mary Wiseman) discovered that her Mirror Universe counterpart was a ruthless, murderous captain whose nickname was Captain Killy, she balked at the idea that that kind of power lay somewhere deep within her. She was disgusted at her counterpart's actions, but through playing the role for a short time and essentially embodying the term "fake it till you make it," her confidence and assertiveness definitely grew for her own advantage.

Even Burnham's first-half budding love interest storyline with Ash Tyler, which seemed a little inconvenient and forced considering Trek has never been great in the love story department, turned out to be part of another long con. It's been confirmed now that Tyler is, in fact, the Klingon Voq, put through a tremendously traumatic physical change and given the memories of a thought-dead Starfleet officer as a kind of sleeper cell spy. Some fans were excited by the romantic subplot going on between Burnham and Tyler, but for others (myself included), it was a distraction and unnecessary for one of the few female leads of a Trek series.

And once Lorca was discovered and his plot exposed, the ship's second-in-command, Saru, had to take over as captain. Saru's leadership style could not be any more different than Lorca's. His touching speech to inspire the crew when faced with the possibility of not returning to their universe, his unwillingness to risk the lives of any of his crew members, his empathy, his kindness, and simply the way he gives his orders with a lighter touch instead of a barking yell, differentiates him from the hyper-masculinity that Lorca represented. It's unclear if Saru will remain the captain of the Discovery going forward into further seasons, but if the ship's captain is going to be male, Saru is a great choice.

Burnham and Mirror Georgiou teaming up to bring down Lorca. Tilly finding her strength and her voice. Stamets saving the mycelial network. Saru taking the captain's chair. Discovery was playing a long con on us all along, and the back half of the series proved the show is very much willing to let its female characters and non-traditional male characters have the spotlight.

And another woman is bound to have a key role in the rest of the season as well. With the Klingon war seemingly almost over, and Starfleet in a tight spot, the captive Klingon L'Rell will no doubt be a major player in the final two episodes. So, essentially, we should all trust the show more going forward, even if, as this inaugural season's first half did, it seems like it's falling into old tropes. Keeping the promise of diversity and enhancing these great female characters means Discovery was doing the right thing all long, and just wanted to take us all along for its wild, exciting ride.

More like this
UK Viewers Will Have To Wait To Watch The Handmaid’s Tale S5
By Maxine Harrison
A TikToker Just Proved Gossip Girl's Identity Was Revealed In Episode 1
By Jake Viswanath and Meguire Hennes
'House of The Dragon' Episode 6 Will Take Place A Decade After Episode 5
By Kadin Burnett
The ‘Emily In Paris’ Season 3 Release Date Is Here, Plus The First Footage
By Bustle Staff
Get Even More From Bustle — Sign Up For The Newsletter