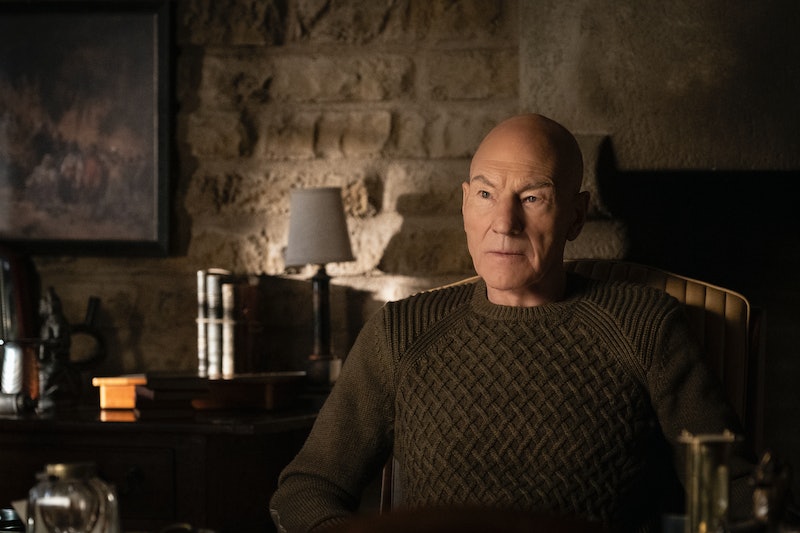 Forget everything you think you know about Star Trek. Erase the goofy 1960s alien costumes, the scantily clad women painted in bright neon colors, and entire segments devoted to the Enterprise crew pressing buttons from your mind. With Star Trek: Picard, the seventh Star Trek series premiering Jan. 23 on CBS All Access, the franchise has grown up and gotten a whole lot darker, leaving the silliness and levity of the original series behind. The result is a show that feels more like a modern TV drama than any other series in the Star Trek franchise.

Picard stars Patrick Stewart as the famous Captain Jean-Luc Picard, who was first introduced in The Next Generation (1987-1994). The sequel series, which is set 15 years after Picard's retirement from Starfleet, opens on the anniversary of an incredible tragedy: the destruction of the planet Romulus, which led to the deaths of over 900 million Romulans. The tragic anniversary kickoff sets the tone for a series that's more violent and bloody than previous franchise installments, squarely positioning it as a gritty drama rather than a jovial space adventure. That's entirely the point.

"Gritty was one of the things that we went for," says Hanelle Culpepper, co-executive producer of Picard and director of the first three episodes. The series' mood, she tells Bustle, reflects that of the man at its center. "Probably at this point in his life, Picard is feeling the weight of guilt from the loss of his friend [the android Data, who sacrificed his life to save him in the 2002 film Nemesis], and also the death of so many Romulans. Certainly he's in a darker point in his life when this starts. Generally there's probably a bit more darkness in society."

That's not to say that Picard is all dour drama. Though the first few episodes are introspective looks at the captain's emotional headspace, Jean-Luc does eventually head out on an action-packed space adventure in search of a mysterious young woman who needs his help. But Culpepper says the slower pace is by design.

"One of my other main goals was to make this feel like a different show from Discovery, [which] is such a fast-paced show," she says. "I wanted to slow this one down. It starts off slow, but it kind of ramps up as he gets a purpose and something to work towards."

The slower pace, combined with Culpepper's use of handheld cameras for a naturalistic effect, gives Picard an atmosphere that stands in direct contrast to Discovery. So, too, does the color palette, which is infused with warmer colors, as opposed to Discovery's cool blues. "I was kind of inspired by fall. That felt like the season of where he is emotionally, and also the colors of the vineyard."

While the somber atmosphere and tragic setup make Picard more similar to any number of beautifully-shot-yet-morose modern dramas than a space fantasy, Picard stands apart from the legions of gritty reboots thanks to its devotion to Star Trek creator Gene Roddenberry's vision.

"Ultimately, it still is about hope. That's the Star Trek ideal," Culpepper says, referencing Roddenberry's peaceful vision of the future. But finding the balance between the utopian vision Star Trek has always projected and the realities of the situation was always going to be tricky. "It certainly is not a perfect world for them," she continues. "Picard can't just go and get a ship from Starfleet and go off and find this young woman. He has to assemble this group of people who will call him on his crap."

While Picard's society has eliminated poverty, disease, and war on Earth, that doesn't mean that humans don't still struggle, and the show is intent on showing that tension and grounding its future world in the realities of our modern-day life. Unlike the somewhat sterile The Next Generation, which introduced us to Picard in the first place, Picard makes a point of including mundane, everyday details, like the messy logistics of running a vineyard. The show may be set in the future, but Picard's humans are still, well, human.

"I think that there are certain parts of what we do in our lives that will always stay the same," Culpepper says of Picard's realistic feel. "Having a true conversation with someone over a glass of wine, [for example]. The more that technology takes us away from something, there's always that desire to go back to when it was originally that authentic."

Picard reflects Star Trek's hopeful and idealistic future in a much more tangible way, too. As the first woman to direct a Star Trek pilot in the franchise's 53 years, Culpepper herself is representative of Roddenberry's vision.

"It's a great feeling," she says of breaking that glass ceiling. "The pressure that I put on myself to succeed and deliver a good project brings on a whole new level when it's Star Trek and when it's Picard."

As with Discovery, great effort has been put into representation in front of the camera, too; Picard's cast is full of women and people of color. "We're in a time when inclusion is very important for the industry, which is a great thing that's happening, but also it's just been the tradition of Star Trek," Culpepper says. "You can't have a Star Trek series that's not diverse. It would just feel incorrect."

As Captain Picard would say, make it so.