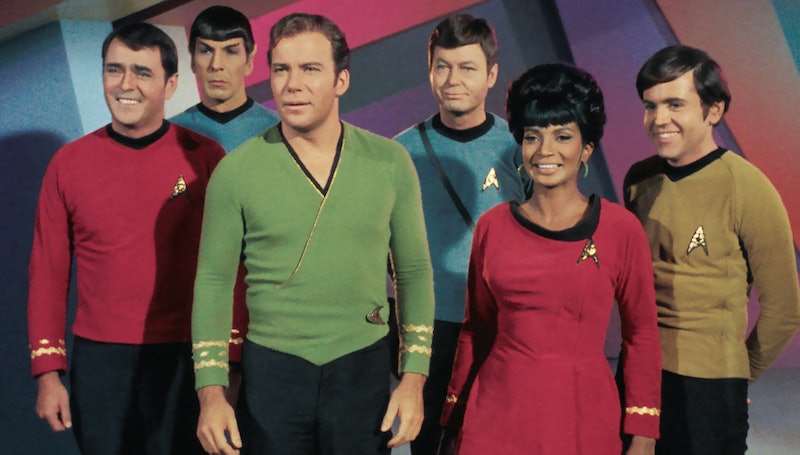 50 years ago, a clunky little sci-fi action-adventure show premiered on television, and the world would never be the same. On Sept. 8, 1966, the first episode of Gene Roddenberry's Star Trek aired, and though many may now consider the show campy, the special effects outdated, and the acting a little over dramatic, there's no question that Star Trek: The Original Series, as it is now referred, was a game-changer for television and sci-fi. 2016's special anniversary has led to a number of celebrations, conventions, and broadcast specials throughout the year, and as a huge fan of the Star Trek universe, I can't emphasize enough why this benchmark birthday is so important.

By now, most people know the basic premise of Star Trek: A diverse crew of space explorers and scientists inhabit the United Federation of Planets' Starship Enterprise and explore the galaxy in search of new life, new civilizations and boldly go where no one has gone before. Whether you're a fan of The Original Series or or one of its follow-up series, The Next Generation, Deep Space Nine, Voyager, and Enterprise , only a watcher of the movies, or a total Star Trek newbie, you're likely aware of just how large the franchise's permeation of pop culture and entertainment history has become. But Star Trek not only influenced TV and movies; it's influenced people as well, and created a sense of hope that continues today, 50 years after its origination.

For me, I'm moved most by what makes Roddenberry's Star Trek universe so different from other science-fiction out there: his Utopian vision of the future. When Roddenberry began creating Star Trek: TOS, the world wasn't two decades out of the most massive war it had ever experienced and was in the midst of a Cold War that could lead to nuclear winter at any moment. Yet despite this, Roddenberry had hope for the future. He envisioned an earth in which humanity had ceased engaging in war, poverty had been eliminated, and humankind was free to explore the galaxy. Not only was it important that a TV show at the time present a world like this, but the fact that Star Trek presented our world and our future this way made it all the more poignant. It suggested that humans would one day see past the differences that made the 1960s such a tumultuous time and evolve into a more tolerant, peaceful species.

But aside from presenting a hopeful future, Star Trek also broke boundaries in its current world, as well. For starters, it featured a woman of color, Lieutenant Uhura (Nichelle Nichols), as one of its main cast members. When Nichols was thinking of leaving the show after the first season, it was Martin Luther King, Jr. who apparently convinced her to stay. As Nichols revealed in an interview (via TVLegends), MLK reportedly told her, "Don't you understand, for the first time we're seen as we should be seen. You don't have a black role. You have an equal role."

Star Trek: TOS also presented one of television's first interracial kisses, when Captain Kirk and Lt. Uhura locked lips. In addition, the Enterprise featured a Russian crewman, Pavel Chekov, during a time when U.S. and Russian relations weren't exactly what you'd call stellar. And the Vulcan science officer Spock proved that human beings could get along with and work with alien species not even from our own planet. The bridge of the Starship Enterprise was one of tolerance, diplomacy, feminism, and compassion. It was a beacon of light and hope for the future, saying that people could achieve great things with each other. It's a sentiment that has continued, for 50 years to this day.

I got to experience that sentiment at my first-ever Star Trek convention in September. Star Trek Mission New York was held in NYC over Labor Day weekend, and when I arrived, I was like a kid in a candy store. Aside from the fun merchandise, the interesting panels, and various stars, the convention was really about the fans. Meeting other Trekkies, talking about favorite episodes, and applauding creative cosplay introduced me to a whole world that I had not experienced before. Granted, this is just my experience and impression, but I have found that Star Trek and its fans have a quality that other sci-fi franchises do not. It's a quality of hoping, and maybe somewhere down deep knowing, that we'll get there one day. Someday, humans will travel to other planets, through the stars, and meet new species. It's a feeling of hope and encouragement, and fans look at Star Trek as our future — one we can achieve once we get past the troubles we are in today.

A lot of forward-looking sci-fi these days, be it in books, movies, or television, embraces a dystopian worldview of the future. Things are post-apocalyptic or humans have wiped themselves out. But looking back on Star Trek: The Original Series, and forward to the new series, Star Trek: Discovery, offers the opposite view — a future where humans have survived, thrived, and fixed the planetary problems we face now. In reality, the world now isn't exactly the Utopian paradise that Roddenberry presented, but perhaps we're on the verge of something, and having Star Trek around to remind us of what humanity can be, or will be, makes this 50th anniversary all the more important to celebrate.