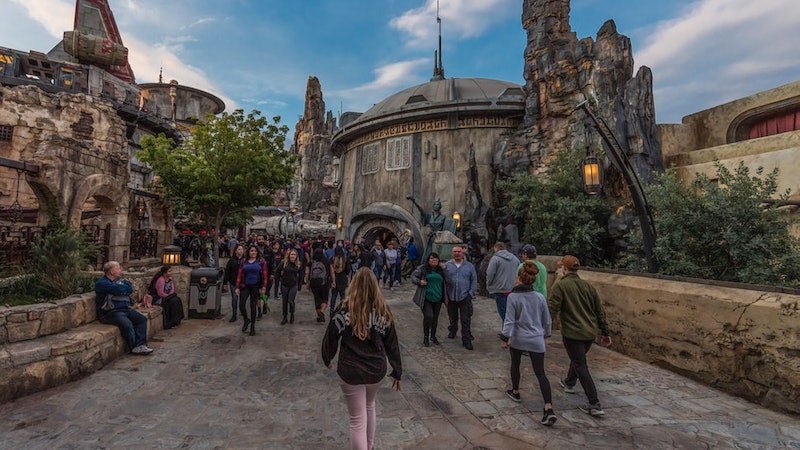 Even weeks after it opened, there's one big question on a lot of Star Wars fans' minds: how do you get into Star Wars: Galaxy's Edge? The Disneyland attraction was getting a huge amount of attention before it even opened, because fans were desperate to visit the Black Spire Outpost on the planet Batuu, described as a “haven for the galaxy’s most colorful — and notorious — characters”.

As you may know, when the park first opened from May 31 to June 23, it was very much a reservation-only situation — and, as you may have seen, the reservations sold out fast. But, luckily, from June 24 onward, the rest of us mere mortals can finally get a shot.

So how can you get in? To help things run smoothly, the Disney Parks blog explains that they put in a virtual queuing system in place when needed and that you can join the line on the Disneyland app once you enter the park. That means having the app one your phone before you go is definitely a good idea.

Once you join, you'll be assigned a boarding group — which will save you a virtual spot in line. You can even make sure that everyone from your group enters at the same time, by linking your theme park tickets on the app. Then you can walk around the park and enjoy, while you check the app or looks for signage that tells you what boarding group currently has access. Plus, you'll be notified on the app when it's your turn.

Don't want to use the app? No problem. "For guests not using the Disneyland app, a boarding group may be obtained with a park admission ticket at select Disney FASTPASS Service locations such as Haunted Mansion, Indiana Jones Adventure, Space Mountain, Splash Mountain or near the Matterhorn Bobsleds," the blog explains. So you'll still have the chance to join, even without the tech.

Disney notes that entry is subject to capacity. You'll have two hours after your boarding group is called where you can be admitted, but just because you've joined a boarding group, you won't be guaranteed entry — so it's your call, but I'd probably get a move on.

A Disney rep tells Bustle the virtual line is a success so far. They started giving boarding passes about an hour after the park opened on the first day, and turned it off around 4:45 p.m., so guests could enter without a boarding group, like they could any other land, after 4:45 p.m.. As for wait times once you're inside? Disney says they're averaging about an hour for Millennium Falcon.

If you're unsure about the virtual queue, there is one slight workaround — and that involves going into Savi’s Workshop or Oga’s Cantina. Savi's Workshop is where you can design your own lightsaber (for $199.99 per lightsaber, plus tax) and Oga's Cantina is a watering hole where you can wet your whistle. If you have reservations for either of these, you automatically get entry to Star Wars: Galaxy's Edge at the time of your reservation.

Will you always have to join the queue to get into Star Wars: Galaxy's Edge? According to CNN, the queuing will go on for "as long as demand requires it.''

Star Wars: Galaxy's Edge has been one of the most exciting new Disney openings in a long time, which is why it might be no surprise that there's been such a huge rush of popularity. Knowing how to get into Star Wars: Galaxy's Edge before you arrive is the best way to get yourself a spot — so make that virtual queue work for you and then just wait for your turn to discover the magic.

This article was updated from its original version on June 26, 2019.