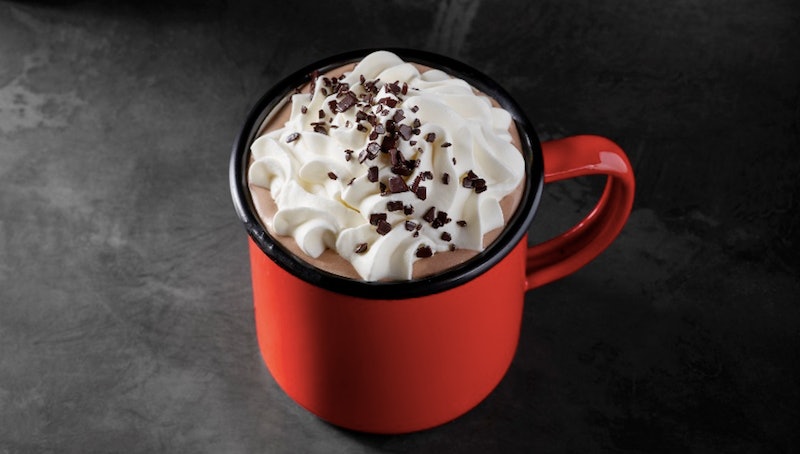 Starbucks is known for their holiday offerings to the point where people don't just love the seasonal drinks, they get excited about the cups they come in, too. But just because Christmas is over, that doesn't mean the coffee chain is done offering up holiday treats. As of Wednesday, December 26, Starbucks has brought back their Black and White drinks, but it's only for a short time.

If you aren't familiar with the Black & White drink collection, they're all twists on menu items Starbucks already offers, but with two types of chocolate, white and dark, instead of one. Also, they sound kinda classy and appropriate for New Year's Eve — they even have sequins. Here's the full rundown of the three beverages:

The Black and White Mocha is espresso poured over white chocolate and dark mocha and combined with steamed milk. It's topped whipped cream and "a stripe of chocolate 'sequins' to resemble a black tie." It seems this one can also be ordered iced, as there is a listing for it on the Starbucks site that way.

As for the Black and White Frappuccino, it has dark and white chocolate mocha sauces blended with coffee, milk, and ice. Like the other two drinks, it's topped with whipped cream and chocolate "sequins".

Starbucks introduced a version of the Black and White drinks at the end of 2016, but they were released in their current form last year. In December 2016, the New Year's drinks were called the Tuxedo Beverage Collection (so, Tuxedo Mocha, Tuxedo Hot Chocolate and Tuxedo Frappuccino), and while the flavors were as they are now, the toppings were different. The drinks were made same way, but were topped with whipped cream that was covered on one side with mocha drizzle (this was meant to resemble as tuxedo), along with chocolate curls. These days, the drinks are apparently more into wearing sequins.

If you aren't into sequins, though — or chocolate sequins, rather — you can still pick up one of Starbucks' other holiday drinks, which will still be available through the New Year, as supplies last. This year, there were six drinks in the lineup: the Peppermint Mocha, the Toasted White Chocolate Mocha, the Caramel Brûlée Latte, the Chestnut Praline Latte, the Eggnog Latte, and the Gingerbread Latte. All of the drinks are available hot, iced, or as a Frappuccino.

As you can see, there are plenty of options for anyone who can't let go of classic seasonal flavors just yet or who wants something a bit fancier to keep them awake on New Year's Eve this time around.