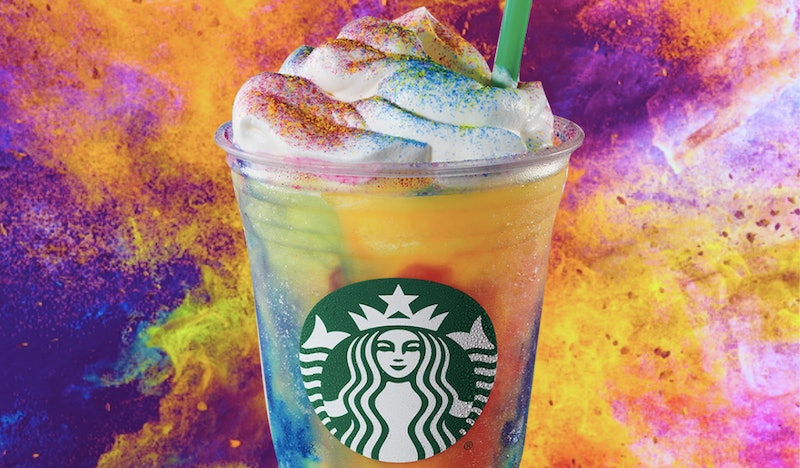 Do you hear that sound? It's the ghost of the Unicorn Frappuccino shaking in its hooves. There's a newer, shinier, aggressively more colorful drink on the block, and it's Starbucks' Tie-Dye Frappuccino, hitting stores Wednesday, July 10 in all of its unrepentant neon glory in the U.S. and Canada for a limited time. Prep your intestines, y'all, because they're about to look like an overzealous leprechaun just jumped rope with them.

There's a chance this isn't the first time you've ready the words "Tie-Dye Frappuccino" on this here internet; early images of the drink leaked on several Instagram accounts dedicated to food, and a few media outlets picked up chatter on Reddit allegedly from Starbucks employees about the rumored launch. Now, though, Starbucks has confirmed the existence of this new offering, along with details that will make your mouth water. Per Starbucks, the red, yellow, and blue tie-dye drink has a "tropical fruit flavor," and is "topped with vanilla whipped cream and dusted with yellow, red and blue powder." And if you're a little iffy about swallowing something brighter than the sun, have no fear — the coloring comes from turmeric, red beet, and spirulina, according to Starbucks.

Let us take a moment to collectively bask in its glory, and start brainstorming all of the summery Instagrams we are now obligated, by the Starbucks mermaid, to find a way to stage and appease her majesty.

A few things to take note of before you go follow your tie-dye bliss: being a limited time menu offering means that this baby will only be around while supplies last. Starbucks doesn't give a specific end date for the offering, but like its Unicorn Frappuccino cousin, it is going to be a matter of days, not weeks. So if you're itching to experience this one, I'd get a move on — that tie-dye shirt you made at summer camp in the '90s may be immortal, but its frapp counterpart, alas, is not.

As any true Starbucks stan knows, the tie-dye frapp is far from the only Instagrammable option you have at your disposal right now. In April, Starbucks launched the Dragon Drink, a fellow tropically-flavored delight that uses that Mango Drangonfruit Refresher as its base and photographs so beautifully that it's a miracle it ever gets consumed at all. This, of course, was inspired by Starbucks' iconic Pink Drink, launched in 2017, which uses Strawberry Acai Refresher as its base. Essentially, if you are in the mood to close your eyes and pretend you're on a beach instead of ten steps from steaming city garbage and the fuel of a bajillion traffic-jammed cars, Starbucks has your back.

Plus, the timing of this couldn't be more fortuitous — the Tie-Dye Frappuccino launches the day before you can get a free Slurpee for 7-Eleven Day on Thursday, July 11. If that isn't the universe's way of compelling us to spend the next 48 hours riding a frozen drink sugar high, I don't know what is.