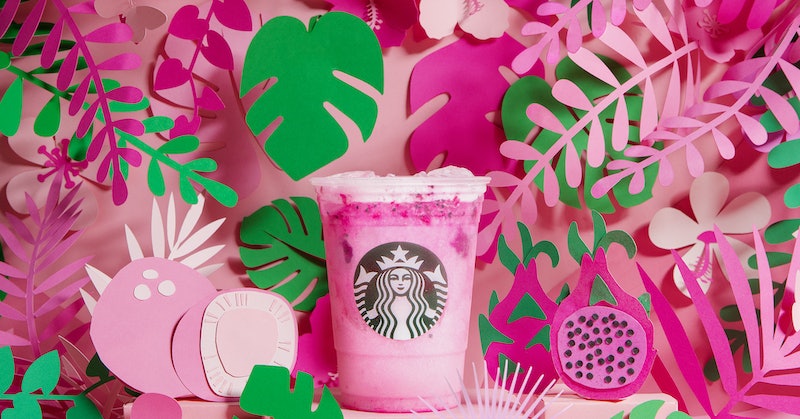 If you’re in the market for a new summer drink of choice, but don’t really feel like jumping on the S’mores Frappuccino train, excellent news: Starbucks just launched a bright pink “Dragon Drink” that will give both you and your Instagram a beautiful, caffeinated boost this summer. Available starting on April 30 as part of the permanent Starbucks menu, the Dragon Drink is set to tint your world aggressively pink — because believe you me: This is no delicate, millennial pink daydream. It’s loud, it's bright, and it's utterly unapologetic about its enthusiasm for life. (Insofar as a beverage is capable of having enthusiasm for life, that is.)

Unlike the Unicorn Frappuccino from several years ago, though, the name of the Dragon Drink doesn’t refer so much to a mythical creature as it does to the base drink used in its recipe. I would actually argue that the Dragon Drink is actually more similar to the Pink Drink; like that other Instagrammable hit, it takes one of Starbucks’ brightly-colored Refreshers beverages and combines it with Coconutmilk for a fruity, creamy, incredibly photogenic treat. But whereas the Pink Drink, which went viral in 2016 and officially joined the Starbucks menu in 2017, uses the Strawberry Acai Refresher as its base, the Dragon Drink starts with the Mango Drangonfruit Refresher.

The Mango Dragonfruit Refresher at Starbucks.

Originally introduced as a new permanent menu item in the summer of 2018, the Mango Dragonfruit Refresher is a juice-like drink flavored with mango and dragon fruit, all shaken up with ice to mix and chill it and served with a scoop of actual diced dragon fruit, or pitaya. The color comes from the dragon fruit itself; red pitayas have a distinctive, bright pink-colored flesh when they’re ripe.

Like all Starbucks Refreshers, the Mango Dragonfruit Refresher is also caffeinated — but not because the drink includes coffee or espresso. Each refresher contains what Starbucks calls Green Coffee Extract: Essentially caffeine pulled from green coffee beans after they’ve been harvested, but before they’ve been roasted. The result gives whatever drink you’ve spiked with it a little jolt of caffeine, but “with none of the roasty coffee flavor” a regular cup of joe or espresso has. If you need a bit of a boost to get you through the day, but you either don’t like or are just a little sick of coffee and tea, a Refresher might be exactly what you’re looking for. A grande-size Mango Drangonfruit refresher has around 45 to 55 mg of caffeine in it, so the Dragon Drink probably also has about that same amount.

The Dragon Drink isn’t the only surprise Starbucks has for us right now, either. You’ve no doubt already heard that the S’mores Frappuccino is back yet again; originally launched for the 2015 summer season, it’s made a re-emergence several times since then, with 2019 proving to be its latest outing. Additionally, two fan-favorite Frappuccinos from years gone by — the Mocha Cookie Crumble Frappuccino and the Caramel Ribbon Crunch Frappuccino — are making a return… and this time, they’re on the permanent menu, just like the Dragon Drink. And in case you need something with a little more, uh, sustenance than a Frapp tends to have, two new lunch items perfect for picnics have arrived, too: The Baja Black Bean Veggie Wrap, and — yes, really — a Crispy Grilled Cheese Sandwich.

It’s true. You can get a grilled cheese at Starbucks now.

Anyhoo, head on over to your friendly neighborhood Starbucks to check out any of these new items; you might even think about using a few of your Starbucks Rewards stars to plus your order up a bit. (I don’t know about you, but I feel like spending 25 stars to add, say, a scoop of blackberries to the Dragon Drink would be an A-plus idea.) Cheers!