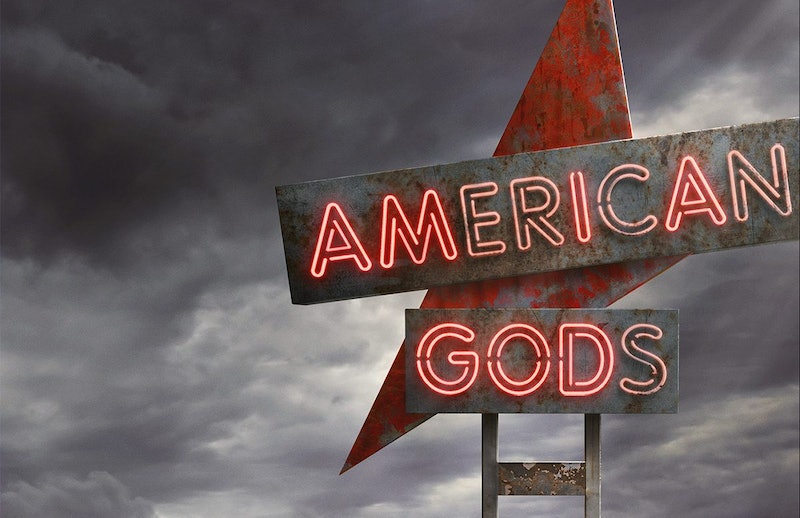 The long wait is over: Starz' American Gods is finally arriving on our very own TV screens on April 30. Fans of the novel are reading up on their ancient mythology, cracking open their all-American beer, and starting to freak out at the thought that show might change all of their favorite scenes. And yes, as with any adaptation, American Gods the show will be different (possibly very different) from the original book. But that's not necessarily a bad thing. It might even be a good thing. As with most stories about gods, you have to have a little faith. Here are the major differences to look out for between the novel and the show, so beware of minor spoilers ahead:

Firstly, book purists should know that author Neil Gaiman is an executive producer on the show, so no major changes are happening without his say so. In an interview with MTV News, back when he was first considering a TV adaptation of his book, Gaiman said that, "You don't want the people who've read the book to be able to go, 'I know everything that's going to be happening.' Well, no. You know a lot more than anybody who is starting from here, but we will do things that will surprise you, too."

So prepare to be surprised, no matter how well you think you know the story of Shadow Moon.

Most book fans worry that a screen adaption is going to cut out all of their favorite minor characters, but producers Bryan Fuller and Michael Green actually plan to expand the American Gods universe. The main plot will still follow ex-con Shadow and his enigmatic boss, Mr. Wednesday, on their surreal road trip across America. But the novel also is full of strange little one-off chapters, dropping in on the various deities in the American present and past.

The show will flesh out some of these story lines, so expect to see a lot more of characters like Mad Sweeney the hard drinking leprechaun, the cab driving jinn and his sort-of boyfriend, and the goddess Bilquis, who only appear for brief but oh-so-memorable chapters (and yes, Bilquis will still swallow a man with her vagina, just like in the book).

We're also going to see a lot more of secondary characters like Laura, Shadow's mostly dead wife, and Mr. Nancy, a modern incarnation of the trickster god Anansi the Spider. We might even get a mini-road trip featuring zombie Laura and Mad Sweeney, which sounds like everything a true fan could possibly want.

Fuller has said that he's inspired by Marvel's cinematic universe, and he's excited at the prospect of telling more stories about some of these characters: "...who knows? In success we may have spin-offs of American Gods that follow lesser gods in greater detail than you might in the main series, but there’s all sorts of potential for this show that we’re very excited about and I hope the audience is as enthusiastic as we are so we can bring those dreams to fruition.”

A lot of fans were confused or even upset to hear that this expanded universe will include actor Jeremy Davis as Jesus. On the one hand, Jesus doesn't appear in the American Gods book outside of a passing mention. And on the other hand, Davis is white and the historical Jesus was not.

But Neil Gaiman actually did intend to put Jesus in the book, as he says in a postscript of the author’s preferred text (p. 526): "I’ve been looking forward to writing the meeting of Shadow and Jesus for most of the book: I couldn’t write about America without mentioning Jesus, after all." The scene just never came out right in the original text, and was eventually scrapped.

As for Jesus's race, a lot of the book deals with the idea of public conception changing the way that gods look and act. How people imagine a god to be fundamentally warps that god's image. We'll just have to wait and see how the show is going to handle this character's controversial appearance.

An expanded universe isn't the only major difference between book and show, either: a lot of the characters and aesthetics of the story have gotten an update.

The leprechaun Mad Sweeney has undergone a makeover as well. In the book, he's described as having an early 2000's trucker look. In the show, he's looking much more like modern day hipster trash, complete with an ironic haircut and suspenders.

If you're wondering how the producers have crammed all of this extra storytelling plus a nearly 600-page novel into just a couple episodes of television, don't worry. Season one of American Gods will only cover the first third of the book, ending with the old gods assembled at the tourist attraction, House on the Rock.

So if you want to know how the show is going to handle all of the monsters, and mysteries in the rest of the book, you'd better start praying for a second and third season.

For now, we'll just have to make do with a season of new gods, new stories, and our old friend Shadow Moon trying to make his way in America.