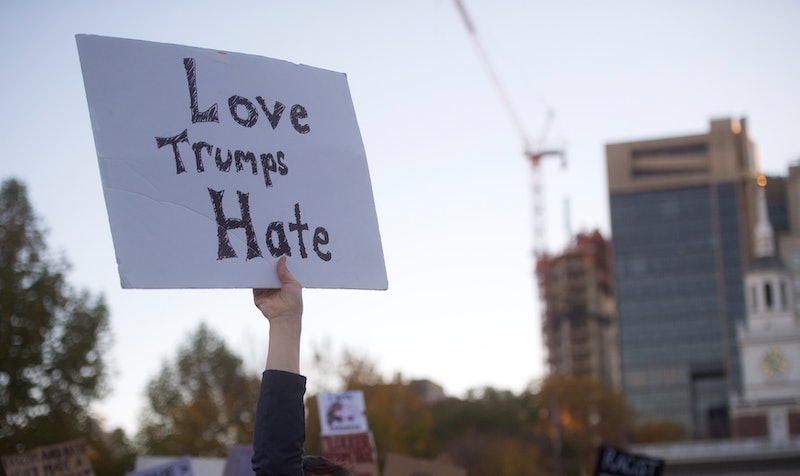 In the early hours of Jan. 29, Empire actor Jussie Smollett was reportedly attacked by two men in ski masks in Chicago. The Chicago police are investigating the violent attack as a possible hate crime, and are canvassing for surveillance video footage of the attack and of the alleged attackers. While the case is garnering a high profile due to his fame and the brutal nature of the attack, it’s not an isolated event: Statistics about violence against LGBTQ people of color show why it's so important to be vocal about supporting vulnerable groups.

According to the FBI, reported hate crimes rose 17 percent from 2016 to 2017, the most recent year for which statistics are available, with 58.1 percent of the attacks motivated by hatred toward the victim’s race, ancestry, or ethnicity. Another 15.9 percent were motivated by hatred toward the victim’s sexuality. It's important to note that these statistics are recorded as "single-bias incidents," meaning the attacks were motivated by only one bias; the FBI noted there were 335 victims "multiple-bias incidents," or 3 percent of 8,828 total victims during this same time period, but does not distinguish which biases were involved in those incidents. A "multiple-bias incident" is one where the incident is "motivated by two or more biases," according to the FBI, or where multiple facets of a victim's identity are under threat.

Statistics specifically around violence against LGBTQ folks find higher incidences of violence against people of color who also identify as LGBTQ. According to statistics from the National Coalition of Anti-Violence Programs (NCAVP), 87 percent of LGBTQ and HIV-affected people murdered in 2011 were people of color, which GLAAD notes was a 70 percent increase over the year before; in 2016, an updated report from the NCAVP about survivors of hate violence found that 61 percent of survivors identified as a person of color. These statistics are from the same year, the report notes, as the shooting at the Pulse Nightclub in Orlando, Florida, which killed 49 people and injured 53 — the majority of whom were LGBTQ and Latinx.

The available numbers on hate crimes aren’t necessarily 100 percent accurate, but it’s hard to deny that the general atmosphere of racism and hate has been on the rise since the 2016 presidential election, as the NAACP said in a June 2018 statement. “From campaign to election, this president has spewed the language of division and hate and it has manifested in not only racist policies but in racists acts against people of color and other groups,” NAACP President and CEO Derrick Johnson said in the statement.

However, there are advocacy groups that are working to protect queer people of color in this environment. One notable group is the National Black Justice Coalition (NBJC), which works to empower Black lesbian, gay, bisexual, transgender, queer, and same gender loving (LGBTQ/SGL) people. The NBJC released a statement about the alleged attack almost immediately.

"We are deeply saddened, disheartened and devastated that an attack steeped in racist and homophobic hatred could happen to anyone,” the NBJC wrote in a statement emailed to Bustle. “But we are not surprised. This attack is a sad reminder that none of us — not even our famous entertainers — are safe from the ugly visages of white supremacy, anti-Blackness and homophobia.”

The NBJC also specifically mentioned the hardships faced by Black trans women, a group that faces a vastly disproportionate amount of violence. If you’re upset by the attack on Smollett — and the increasing number of attacks on queer people, queer people of color, and people of color in general, you can support organizations that are pushing back against hate.

Some organizations doing work to support these groups are:

Donating or volunteering your time to any of these groups directly supports vulnerable populations at risk of this kind of violence.

Editor's note: If you or someone you know is triggered by the news about this brutal attack, you can text HOME to the Crisis Text Line at 741741. You can also find more resources here.