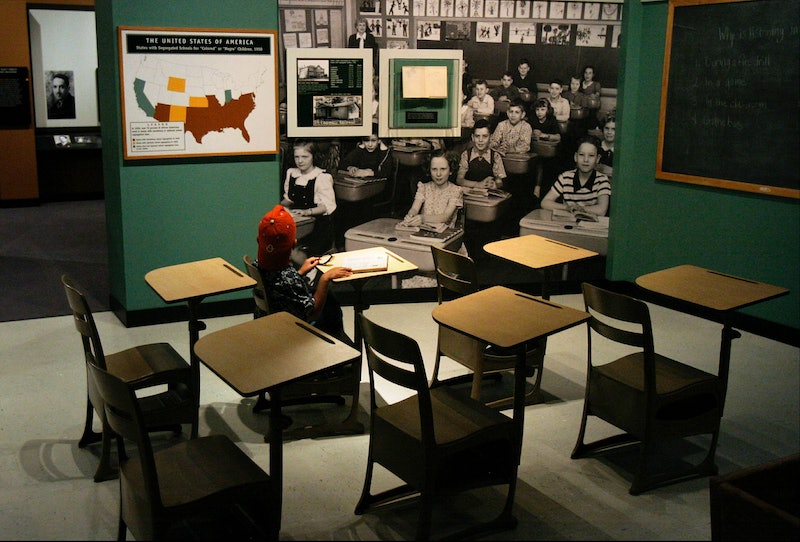 May 17 marks the 65th anniversary of the landmark Brown v. Board of Education ruling, which determined that public school segregation was unconstitutional. However, a recent report from UCLA and Penn State called "Harming Our Common Future: America's Segregated Schools 65 Years after Brown" indicates that the percentage of intensely segregated schools has actually increased in the last few decades. These statistics on school segregation over the years paint a picture of a Supreme Court decision that has weakened in recent years, The New York Times reported, alongside other civil rights cases.

According to the study, a series of Supreme Court decisions — as well as the passage of the Civil Rights Act in 1964 — led to increased desegregation for black students, as well as greater rates of integrated schools for all students, up until the 1980s. But starting in the 1990s, segregation levels once again began to increase, as a different series of Supreme Court rulings terminated or reversed hundreds of desegregation orders across the country. For example, in its 1991 Board of Education of Oklahoma City Public Schools v. Dowell ruling, the Supreme Court decided that injunctions filed to facilitate school desegregation are not permanent.

White students now make up a minority in public school enrollment — 48.4% of public school students in the United States are white — but that doesn't mean that schools are becoming more integrated. The report defines intensely segregated schools as those where less than 10 percent of the student body is white, and the percentage of these intensely segregated schools increased from 6% in 1988 to 18% in 2016.

Black and Latinx students in particular have been exposed to double segregation, researchers learned. Using eligibility for free or reduced price lunches as a marker, the report indicated that the average black and Latinx students attend schools that are more impacted by poverty than than those attended by white or Asian students.

School segregation today looks different than it did in the 1950s, when the Brown v. Board of Education ruling took place, particularly because there have been growing rates of Latinx and Asian students enrolled in public schools across the country. But segregation is nonetheless still a prevalent systemic issue, researchers pointed out, and they proposed a few suggestions to combat it at the end of their report.

Among the recommendations put forward by researchers were proposals to more effectively measure economic segregation and its relationship with racial segregation, to train school and community staff members in diversity and inclusion, and to hire staff and faculty members from a variety of backgrounds.