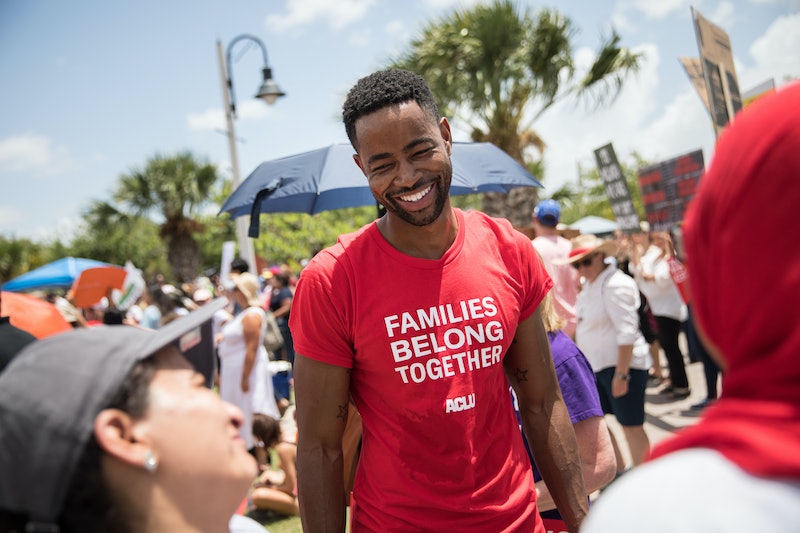 Getting tested for sexually transmitted infections (STIs) is, thankfully, no longer as stigmatized as it once was. Think of that 2012 Girls episode, where Jessa proudly claims that “all adventurous women” have human papillomavirus (HPV), an STI that can lead to cervical cancer. Though the rate is more like 80 percent of sexually active people, statistics show that overall STI testing is up, thanks to initiatives like awareness campaigns. But one STI still does not have the stigma-busting one liners, the public awareness, or — crucially — the testing rates.

“Some people think that because it isn’t on [the news], they think that AIDS and HIV are fully contained,” actor and activist Jay Ellis tells Bustle, in a phone interview ahead of National Black HIV/AIDS Awareness Day on Feb. 7. “People often think that it’s done, it’s over, and they don’t need to worry about it.” That couldn’t be further from the case.

Ellis, in addition to playing Lawrence on HBO’s Insecure, is active in raising awareness about HIV/AIDS. Since losing an uncle to AIDS when he was 10, Ellis has been using his platform to break stigma about the virus. “The infection rate of HIV is still high, especially among African Americans,” Ellis says. “Having a platform and being able to speak out is something that I wanted to be able to do.”

HIV affects around 1 million people in the United States, according to amfAR, an international foundation for HIV/AIDS research (and of whose board Ellis is a member), and around 15 percent of those people don’t know that they’re infected. Black Americans made up a little less than half of new HIV diagnoses in 2015, and Black gay and bisexual men made up around a third of total new diagnoses in the same year, according to the CDC. Among transgender women, 51 percent of those who were infected with HIV from 2009-2014 are Black; 58 percent of transgender men infected with HIV during the same period are Black, according to the CDC. One study estimated that over half of all Black transgender women in the U.S. are living with HIV. But while Black people are more likely to be tested for HIV than Latinx or white folks, the CDC reports that over a third have never been tested; over half of all Americans have never been tested for HIV, not even once. The CDC recommends that everyone between the ages of 13-64 get tested for HIV at least once, but researchers cite stigma as a major barrier to accessing testing.

What people are missing about these statistics, however, is that not only is HIV/AIDS preventable, but it’s also treatable. While there's no cure for HIV/AIDS, medication regimens can help people live healthy lives with the virus.

HIV can be transmitted when HIV-infected bodily fluids like semen, blood, vaginal mucus, or breast milk enter the body of someone without HIV through cuts or sores, according to Planned Parenthood. Most infections happen through vaginal or anal sex; it's also possible to be exposed to HIV by using a syringe or needle that's also been used on someone with HIV. (You cannot get HIV through kissing, sharing food, or touching a toilet seat — those are just myths.) Practicing safe sex, including using latex or rubber condoms every time you have sex, and safe injection practices, such as not sharing syringes or needles, can vastly decrease your risk of contracting HIV, according to amfAR.

For people who are at high risk of contracting HIV, taking pre-exposure prophylaxis (PreP) medication can help prevent infection. If you’re exposed to HIV, aka if you’ve had unprotected sex with someone who is HIV positive, or who is of an unknown HIV status and high risk of exposure, post-exposure prophylaxis (PEP) can reduce your risk of infection if taken within 72 hours of possible exposure, according to the CDC. And, if you do test positive for HIV, you can be prescribed anti-retroviral therapy (ART) to reduce your viral load, aka the amount of virus that’s in your blood. This not only keeps you healthy, but also means you have “effectively no risk” of passing the virus on to an HIV-negative partner.

Ellis emphasizes that through having conversations about HIV/AIDS and other STIs, it’s possible to break the stigma that prevents people from getting tested and knowing their status. “A lot of people are having sex and … and enjoying having sex, but that doesn't mean that they shouldn't be fully educated on all of the resources that are there for them to do it safely,” he says. “Consistency of information is a big issue because so many people have heard so many different things and aren't really sure what to believe.” But through having tough conversations, Ellis says, it’s possible to empower those around us with information. “It's little things, like [having] conversations with younger siblings, brothers, sisters, cousins, uncles. [Asking], ‘Hey, did you get tested? Why not?’ Call your friends out. [Tell them,] ‘Just because you used a condom, you should still get tested.’”

“We just have to step up into the community and talk about it,” Ellis says.