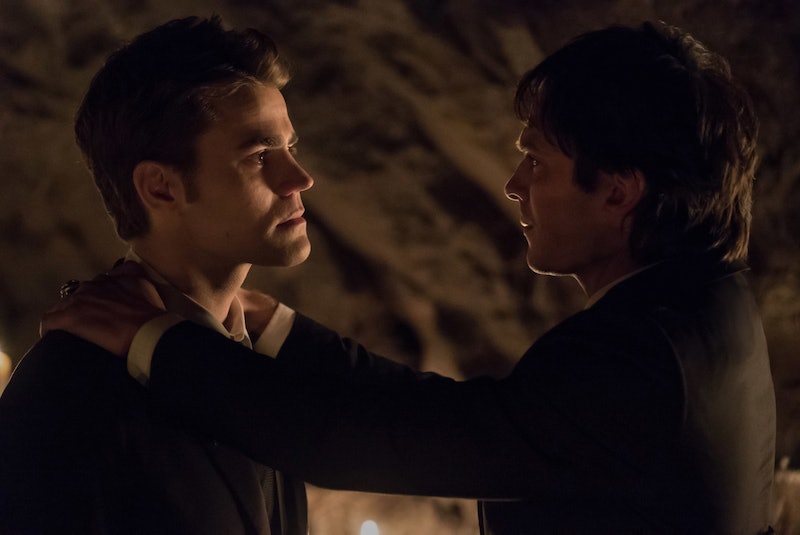 It wouldn't be The Vampire Diaries if there wasn't death. And, the TVD series finale, "I Was Feeling Epic" is no exception. One of the show's most beloved characters, Stefan Salvatore, met his end on the series in the finale when he sacrificed himself so that Damon could have a life with Elena. Of course, it wasn't all just to save his brother. Stefan died on The Vampire Diaries to save Mystic Falls from being consumed in Hell Fire.

Katherine's evil plan to bring Hell Fire to Mystic Falls wasn't just a way to get revenge on Damon and Stefan, it was also a way to destroy Elena once and for all. With some help from Kai, Katherine returned to town in all her glory and magically confined Elena's body to the high school to ensure that it would be consumed in the fire. Not willing to let Katherine win, Bonnie came up with a plan to send the Hell Fire back into Hell and destroy it. The only problem: Katherine had to be in Hell when she did it, which meant that one Salvatore brother had to take the magic dagger and stab her with it as the fire consumed her. (In other words, a Salvatore brother had to die.)

At first, Damon compelled a human Stefan to leave, because he felt it was his duty as the big brother to stay. But, Stefan didn't let him get away with it. He'd been taking vervaine, and as soon as he reached the hospital, he took syringe, drew his own blood, and went back to inject Damon. By giving Damon his own blood, Stefan cured Damon, but also sped up his aging (without the cure, those years spent being immortal start to catch up to you). While Damon was unconscious, Stefan killed Katherine and died. As Stefan passed from the world of the living to a new, peaceful Heaven, he saw Elena and told her what he did. Stefan gave Damon and Elena his blessing, and asked Elena to give a message to Caroline. When she heard that Stefan was planning on sacrificing herself, she left him a message telling her new husband that she understood and that she'd love him forever. "I heard her and I will love her forever too," Stefan told Elena.

And if you're crying like me right now, take comfort in the fact that in death Stefan was reunited with his best friend, Lexie, and eventually he saw Damon again.

More like this
'The Princess Diaries 3' May Go Ahead Without Anne Hathaway
By Darshita Goyal
The First Trailer For 'That '90s Show' Includes So Many Nods To The Original Series
By Jack Irvin, Alyssa Lapid and Grace Wehniainen
'Gilmore Girls’ Lauren Graham Just Revived Our Hopes For A New Reunion
By El Hunt
The 'Ugly Betty' Cast Just Reunited In The Best Way
By Sam Ramsden
Get Even More From Bustle — Sign Up For The Newsletter