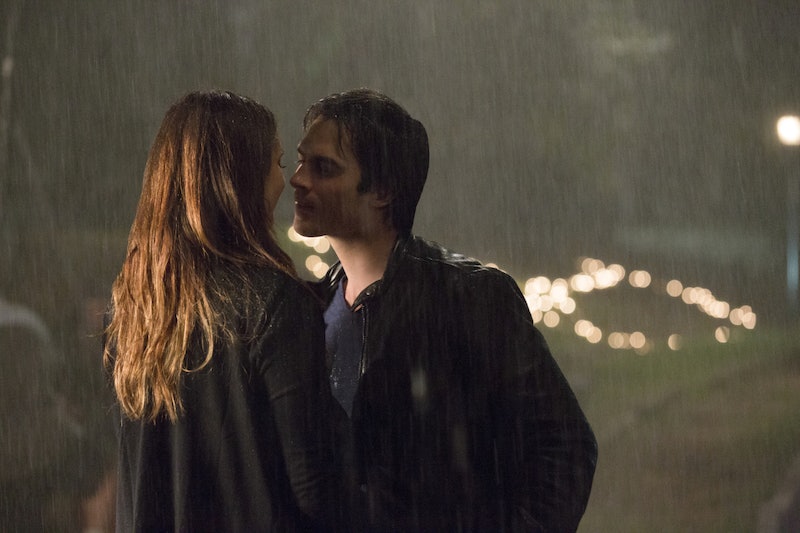 With the Vampire Diaries final showdown on Friday, everyone wants to know the same thing: Will Damon and Elena be together at the end of TVD? While I don’t have any spoilers here, I have some speculation and I think it’s safe to assume that at the end of it all Delena will live on forever. Why do I think this? Because the creators of the show would have a twisted sense of humor if they ended it all and those two were somehow forced apart. We know that someone is dying in the Vampire Diaries finale, but I’m going to rule them both out and say that if any couple on the Vampire Diaries should end up with a happily ever after, it’s Damon and Elena.

After two seasons, a couple years, and a time jump, Elena Gilbert is finally waking up from her deep sleep to Katherine trying to destroy her hometown of Mystic Falls. She’s waking up in the future, but it almost seems like Season 1 all over again, right? There’s one final battle to destroy the evil lurking around town, even though, if you ask me, I probably would have just moved away at this point and compelled myself a mansion in Malibu. Anyways my point is, why would they go through all the trouble of keeping her body preserved and safe if they plan to kill her off in this final episode? They wouldn’t. Elena Gilbert will be kept safe. She always has been kept safe by the Salvatore brothers and there’s no way that will change in one 43 minute episode.

As for Damon Salvatore, it would be pretty damn mean to wake up the love of his life so she can watch him die in the end. I don’t think the creators of the show would ever be that cruel to their fans. Killing Enzo already hurt us enough. Taking Damon away too would just be the worst thing they could do to Bonnie and to Elena. Not to mention, in the entire history of the show, Stefan has always taken the fall for him and protected him. It would be pretty weird for a significant change to that pattern this late in the game. So for those reasons, it seems like Damon too is safe from death.

And while the whole world is hoping Damon and Elena end up together, Ian Somerhalder doesn’t want that ending for her. He told Variety:

Damon’s 174 years old and in love with an 18-year-old. It’s the most unbelievable example of robbing the cradle, first of all. Secondly, these boys, they came into this town, they wreaked havoc, they ruined lives. Honestly, I think the best thing for Mystic Falls would be for these guys and all of these vampires and witches to just go away. Let Elena wake up and have these boys gone and never know any of this happened.

Somerhalder went on to say that the Salvatore brothers should head to the Caribbean, sit on the beach drinking expensive rum, give each other a hug and then take off their rings together and burn up. I mean, that’s a pretty poetic ending considering we all thought Elena was the love story when it turned out to be the brotherly love that saved them over and over again.

However, that’s not the ending I or any of the other die hard Delena fans want. We want to see Damon drink up that cure and a flash forward of them living the rest of their lives out as humans, preferably not in Mystic Falls.