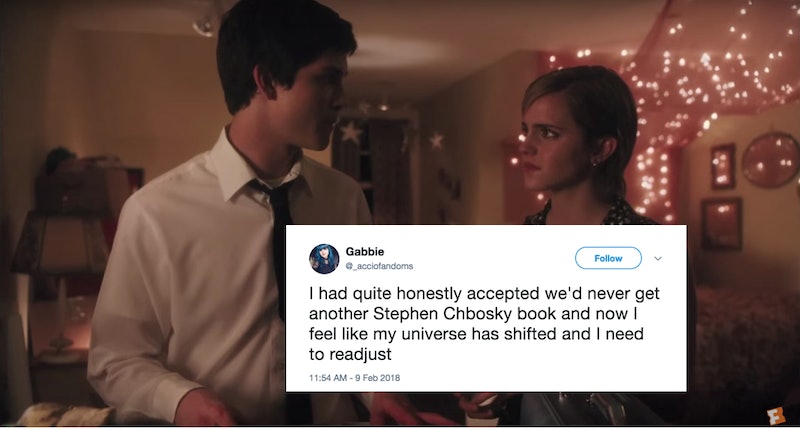 If you have been patiently waiting for the beloved author of The Perks of Being a Wallflower to publish another book you can obsess over, I have some great news for you: Stephen Chbosky is finally writing a second novel. The bad news? It doesn't hit shelves until Fall 2019, so fans still have well over a year to wait.

According to EW, who broke the exciting book news, Imaginary Friend centers around Kate Reese, a single mother who, after escaping an abusive relationship, tries to establish a fresh start for herself and her son, Christopher, in a brand new town. According to the rest of the synopsis:

"Her world begins to unravel after Christopher vanishes into the Mission Street Woods — where 50 years earlier an eerily similar disappearance occurred. When her son emerges six days later unharmed but not unchanged, he brings with him a secret: a voice only he can hear and a warning of the tragedy to come to the real world if he fails to protect it. Soon Kate and Christopher find themselves in the fight of their lives, caught in the middle of a war playing out between good and evil, with their small town as the battle ground.”

I don't know about you, but I already have the chills. Is it fall 2019 yet, because I feel like fans have waited long enough for new work from this beloved author.

When the news broke, Chbosky fans were quick to take to Twitter with excitement over the upcoming novel. Readers celebrated the exciting development, while others couldn't help but share their disbelief that, after almost 20 years, one of their favorite authors if finally giving them another novel.

Clearly, readers can't wait to sink their teeth into another story from the genius behind The Perks of Being a Wallflower, even if his sophomore novel is radically different from his debut. After all, it has been nearly 20 years since Chbosky wrote about Charlie's freshman year of high school, and a lot has happened in the world, and in the author's life and career, since then.

The Perks of Being a Wallflower by Stephen Chbosky, $8, Amazon

Although he might have taken the last two decades of from novel writing, Chbosky has been keeping himself very busy. Over the past 20 years, Chbosky has established a successful career in TV and film. In addition to directing the film adaptation of The Perks of Being a Wallflower, he wrote the screenplay for the film version of Rent, as well as for the CBS television drama Jericho. Last year, he wrote the screenplay for Disney's live action Beauty and the Beast, and later, wrote and directed the film adaptation of R.J. Palacio's bestselling middle grade novel, Wonder.

There is still a long wait until Imaginary Friends finds its way to a bookstore near you, but it seems like this new horror novel will be well worth the wait. It might not be the same as Chbosky's cherished coming-of-age story, if Ben Sevier, the senior vice president of Grand Central Publishing, is to be believed, fans can get excited for “an epic work of imagination by one of our great storytellers.”

Keep an eye out for Imaginary Friends, out from GCP sometime fall 2019.