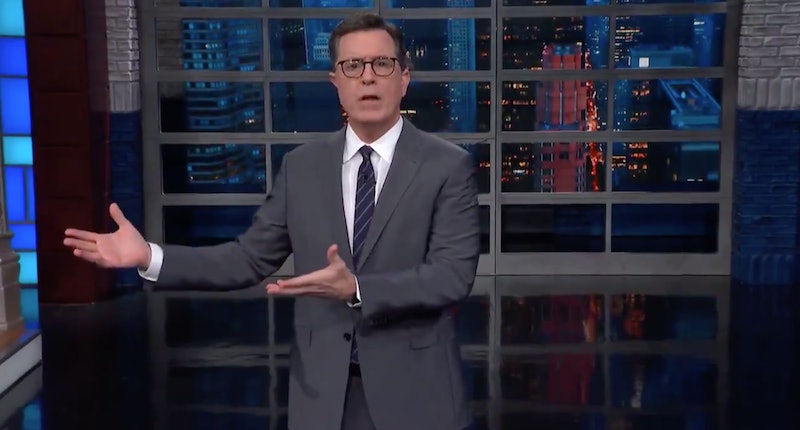 President Trump came under fire on The Late Show for his insenstivity — and "consistency" — during his visit to the wildfires on the West Coast. Stephen Colbert criticized Trump's Paradise, California, wildfire response and climate change views with biting comedy. And after watching the videos of Trump, there was one thing Colbert really wanted.

Colbert's segment was built off of video of Trump's visit to the wildfires, and the interviews he gave while there. "In the face of unimaginable tragedy, the president was consistent," Colbert said introducing video of Trump in the town of Paradise on Saturday.

"You don't see what's going on until you come here," Trump tells the press in the video. "And what we saw, at Pleasure — what a name, right now — but what we just saw, we just left Pleasure."

Trump's then corrected by the journalists off camera who tell him the name of the town is "Paradise." Trump continues, though, repeating what he said with the correct name, and calling the fires "unacceptable."

Colbert then joked, "'Pleasure,' 'Paradise,' it's easy to get them mixed up. Just remember, Mr. President, 'Pleasure' is the dancer; 'Paradise' is where she works."

As the crowd starts to laugh, first uncomfortably, Colbert moves on to the next clip of Trump speaking about climate change. Trump says the fires have not changed his opinion on the matter. "No, no, I have a strong opinion. I want great climate," he tells the reporter in the video.

Colbert pauses and then provides his one wish in the final joke on the subject. "You want learn grammar. I want new president," Colbert said.

Those jokes didn't even make use of the most-followed Trump quote on the California fires. That was the comparison he made to Finland. "I was with the president of Finland and he said: ‘We have, much different, we are a forest nation.’ He called it a forest nation. And they spend a lot of time on raking and cleaning and doing things, and they don’t have any problem," Trump told reporters.

Trump's solution of clear forest floors was countered by California politicians — as were his assertions on climate change. Rep. Adam Schiff spoke to ABC's Martha Raddatz on This Week Sunday.

"With climate change, they're going to be worse, and we need to take steps to reduce their frequency, reduce their severity and yes, forest management is one piece of it, but there are lots of other pieces, and I think the president needs to listen to the experts because clearly he isn't one of them," Schiff said.

Colbert's jokes about Trump's wildfire response was one of many critiques he has made of the president on air. Also on Monday night, he did a skit that spoofed Trump's interview with Fox News' Chris Wallace.

Colbert took the place of the journalist and was edited in to mock the president's answers. Colbert teased Trump, poking fun at his relationship with Vladimir Putin, his marriage, and how he rates his own presidency.

There's no end in sight to Colbert's Trump jokes — at least not until 2020.