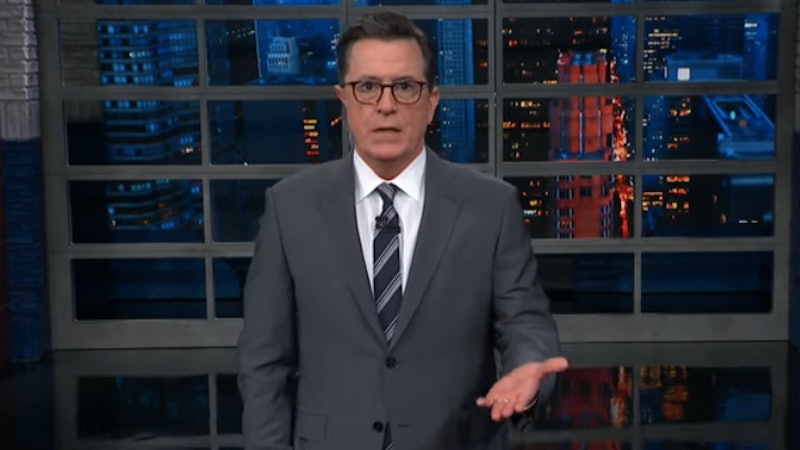 The Late Show With Stephen Colbert
By Caroline Burke
Feb. 7, 2019

On Wednesday evening, late night host Stephen Colbert relived Trump's SOTU in a decidedly unique way: by pointing out POTUS' colloquial rhythm. Specifically, Colbert noticed how Trump's speech started to rhyme right about the point that he argued "partisan investigations" would be one of the only things that could halt the nation's success. "I don't know, I think that's kind of cute," Colbert joked. "He threatened our democracy with a poem!"

Colbert was referencing these lines from Trump's SOTU speech:

An economic miracle is taking place in the United States, and the only thing that can stop it are foolish wars, politics, or ridiculous partisan investigation. If there is going to be peace and legislation, there cannot be war and investigation.

Following Colbert's recognition of that little ditty, he came up with a new poem of his own, in an impersonation of Trump:

There once was a Donald from Queens/ Who came from a family of means/ "Don't look into my stuff," he cried in a huff/ Because you'll find out I betrayed our country to the Russians.

Colbert wasn't finished, though. He also pointed out how "wholeheartedly" Trump used the lingual tool of alliteration. Alliteration is the repetition of words in a phrase or sentence that all start with similar sounds (like the end of this sentence.)

The audience was then given a series of clips from the SOTU, including various points at which Trump said, "cooperation, compromise, and the common good," "smart, strategic, see-through steel barrier," and "greatness or gridlock, results or resistance, vision or vengeance," to name some of the clips.

In response to the clips, Colbert said, "That is painful pandering pablum from Putin's pet president."

At another point on Wednesday night, The Late Show also revealed "footage of the real #SOTU speech," in which a doctored clip had people shouting about how boring the speech was. "This speech ... takes too long," Trump faux-said at one point. "There's too much ... clapping," he faux-said at another point.

On Tuesday night, immediately following the SOTU, a number of late night hosts skewered the president's address, as well. Seth Meyers said on Late Night With Seth Meyers, “Before Trump’s speech even started, we already had a big ‘oops’ moment — Trump’s weirdly crooked tie. Trump is so unpopular, even his tie has moved to the left."

As for Trevor Noah, he had a different approach to the SOTU, during his Tuesday evening episode of The Daily Show With Trevor Noah. Noah said:

They say it’s the State of the Union, but it’s really just an excuse for people to troll each other. Democrats invited undocumented immigrants who worked for Trump, and along the other side, to try to show how intolerant the radical left is, Trump invites an 11-year-old boy who gets bullied just because his last name is Trump. Both sides are trolling each other so hard, I’m surprised that the Democrats didn’t invite the kid’s bully.

No matter what side of the partisan aisle you stand on, you can probably agree that Trump's SOTU speech had plenty of material for late-night hosts.