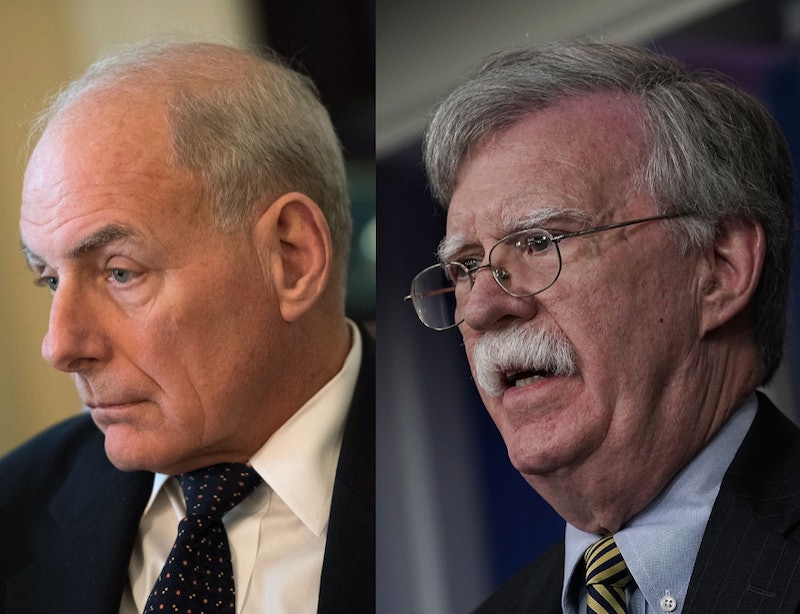 On Thursday night, late night talk show host Stephen Colbert took John Kelly and John Bolton to task for the shouting match that supposedly took place in the White House earlier on Thursday. The chief of staff and the national security adviser reportedly got in a heated argument (apparently filled with curses and all) over a recent surge in border crossings and the growing border crisis. The fight was reportedly so big that it led to speculation over whether one of them would quit, according to Bloomberg. Bustle has reached out to the White House for comment.

The story has led to some conflicting reports: Some say that Kirstjen Nielsen, the Secretary of the Department of Homeland Security, was present for the argument, and others say that she was merely mentioned in the argument, with Bolton criticizing DHS and Kelly defending Nielsen. What's more, the intensity of the argument is up to for debate.

According to Bloomberg, a White House official said Bolton and Nielsen had a "good conversation" after the supposed fight, focusing on the importance of protecting the border. Later on that day, White House Press Secretary Sarah Huckabee Sanders issued the following comment: “While we are passionate about solving the issue of illegal immigration, we are not angry at one another."

While it seems unlikely that either Bolton or Kelly will depart the White House in the immediate future, it's not far fetched to imagine one of them leaving before 2020.

Kelly in particular has been plagued by rumors throughout the last several months over whether he would resign as chief of staff. As of July, he had confirmed his plans to stay on through 2020; he even told his senior aides that the president had explicitly asked him to stay through that date, per a New York Times report.

Regardless of whether Kelly or Bolton chooses to leave the administration at some point in the future, one thing is clear: Trump probably doesn't care if they argue. In fact, he might even like it. In March, Trump said to reporters amid rumors of chaos in the White House, "It's tough. I like conflict, I like having two people with different points of view, and I certainly have that."

He continued, "I like watching it, I like seeing it, and I think it's the best way to go."

Trump has also made it clear that he believes everyone in his administration is dispensable, except for him. In a Fox News interview last November, when answering a question by Laura Ingraham about the ability of the State Department to "push his vision through," Trump said, "Let me tell you, the one that matters is me. I'm the only one that matters, because when it comes to it, that's what the policy is going to be. You've seen that, you've seen it strongly."