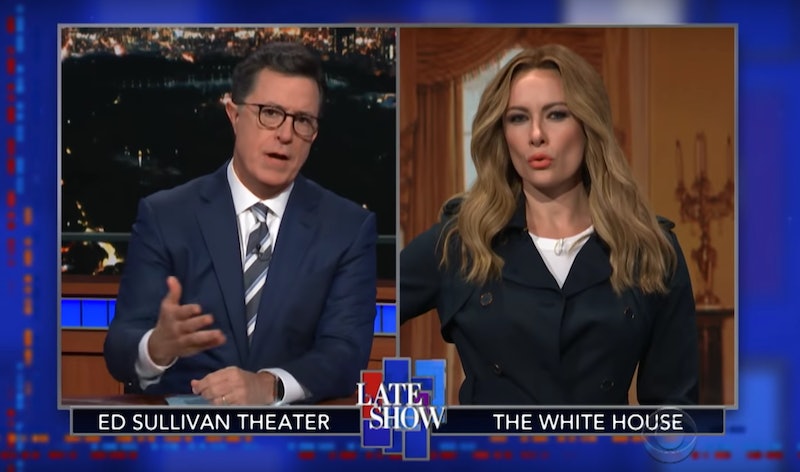 Late Show Host Stephen Colbert clapped back yet again at Melania Trump after her latest fashion faux pas. The first lady made headlines last week when she visited a child detention center in McAllen, Texas, wearing an olive green Zara jacket that read “I Really Don’t Care. Do U?” on the back. Colbert called Melania out about the jacket on his show right away, saying, “we checked it so many times, because we thought, this has to be fake."

But the jacket really was real. And the first problem people pointed out problem with the First Lady's fashion choice was that children were being separated from their families, and the whole world cared a whole freaking lot.

And this week, Colbert came back for seconds, offering an explicit alternative to add to her White House wardrobe.

Although the First Lady’s spokesperson previously told Bustle in a statement that “there was no hidden message” behind the jacket, that hasn’t stopped late night hosts and media from having a field day analyzing and satirizing the decision to wear such an inappropriate jacket to such a serious event.

Case and point: Colbert. On The Late Show, he interviewed Laura Benanti — a dead ringer for Melania — to show off a new “complicit clothing line,” as Deadline dubbed it. The highlight? A black jacket that served up some strong accusations of the First Lady.

"Everyone's still trying to figure out the meaning behind Melania Trump's 'coat-gate,' as no one is calling it," Colbert said before introducing the “First Lady,” who was impersonated by Benanti.

He went on to imply that Melania's costumes were a tactic to distract the media from real issues. First, Benanti modeled a hat that said “F the Kids.” Then she sported a white, bejeweled “Murder the Penguins” scarf, and a white T-shirt that read “Believe My Clothing.”

This was in keeping with the humous tone Colbert took right after the jacket incident. At the time, he said Melania forgot “the most important piece of fashion advice: before you leave the house, look in the mirror and take off that jacket.” But during this show, he took things a step further, treading into more serious territory.

Colbert’s satire quickly moved from humor to blatantly calling out the First Lady: “I’m starting to think your clothes are a purposeful distraction from the heart-breaking images we’ve seen of the detention centers,” Colbert said.

That’s when Benanti turned around to reveal the not-so-easy-to-swallow punch line.

“How many more monstrous acts do I have to support before people finally start seeing me as complicit in all this?" the jacket read.

Colbert wasn’t the only one who thought the jacket was a distraction from the real issues at hand. Sunday on This Week With George Stephanopoulos, ABC’s Cecilia Vega argued that the jacket must have had a purpose and that no matter who the “don’t care” message was directed at, all it did was take air time away from kids and parents who’d been separated.

“It completely took away from the story,” Vega said. “She was down there to show that she cared about undocumented immigrant children being detained on the border, and we end up talking about a coat.

Donna Brazile agreed with Vega: “It really doesn’t matter what the First Lady was trying to say with her jacket, you know what it did? It distracted us from talking about these children."

Colbert isn't the first person to create a spin-off of the jacket. The DNC created a "We Care" shirt. Several other brands have created "We Really Care" shirts as well, as Glamour reported. But none of these spoof jackets have managed to say as much as Colbert's said — but to be fair, they also had a shorter word count.