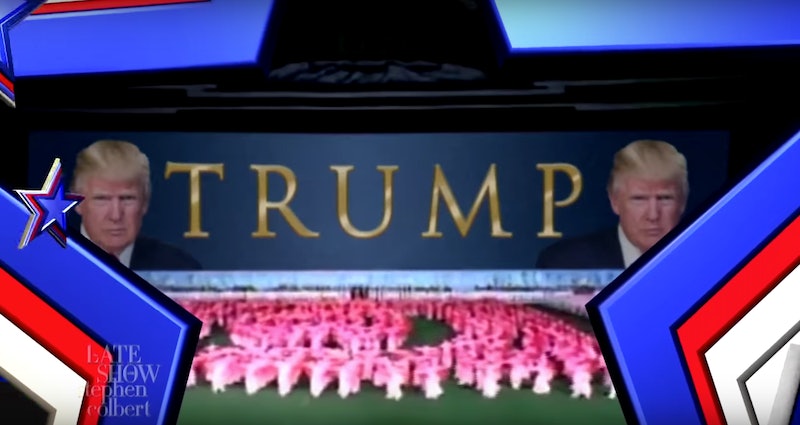 The Late Show with Stephen Colbert/YouTube
By Priscilla Totiyapungprasert
Feb. 8, 2018

If you're wondering why you're looking at a picture of Uncle Sam with cleavage or people dancing underneath Trump's photo, then you haven't seen the hilarious parody ad by Stephen Colbert for Trump's military parade. On Tuesday the Pentagon confirmed it was looking for possible dates for a military parade, as demanded by President Trump. The Commander in Chief is pushing for a military parade with soldiers and weaponry in Washington D.C. — a request that has been met with a lukewarm response by both political parties.

Colbert and his team had some thoughts of their own on President Trump's demand for a grandiose military parade. And what better way to entice their audience than with a TV spot promoting a Trumps-Giving Day Military Parade? The parody ad was released six hours before the Late Show aired.

“It’s the first ever Macy’s Trumps-Giving Day Military Parade,” the commercial begins. “Join us as the streets of Washington, D.C. are filled with a thrilling display of authoritarian power.”

The patriotic ad then goes on to show how spectacular the Trumps-Giving Day military parade really would be, starting with a flashy show of fighter jets and the Navy dragging nuclear subs down the streets of the nation's capital. Along with plenty of “things that go bang” and "things that go boom," other treats include a dancing Steven Seagal, the Trump Youth in salute, "Uncle Sam with boobs," and "Robert Mueller in a cage" for people to poke.

"Join us for rockets and Rockettes," the commercial promises as the red, white, and blue logo for the Macy's Trumps-Giving Day Military Parade appears again.

Later on his show, Colbert gave his scathing opinion on the Trump military parade, calling it “the Usain Bolt of stupid” and his “latest record-setting dumb." The Late Show host also asked the audience to check their "Dictator Bingo" cards. “I was close, I had rallies and attack the free press, I didn’t have military parade," he joked.

Colbert isn't the only one to criticize or openly mock Trump's eager bid for a military parade, which opponents call a poor PR move for America, plus a waste of taxpayers' money on top of that. Some of the tepid reactions come from none other than Trump's favorite news channel Fox.

Fox News' national security correspondent Jennifer Griffin said Trump's request for a military parade was met with a "collective eye roll" by military leaders, and that the Pentagon had originally seen it as a joke. “Many fear that the US will look like the dictators they scoff at around the world,” she explained.

(Note: Trump's inspiration actually comes from a non-authoritarian source. He reportedly got the idea for the military parade from the similar one held on Bastille Day in Paris.)

There's also the concern that this ostentatious show of military brass will come with a high price tag. "I don't know, it seems like a waste of money," Fox & Friends host Brian Kilmeade said on his segment.

Bill, I served in the military for almost 22 years, enlisted man and officer. Let me tell you: I value our tradition of civilian control of the military. . . . I don’t like the image of heavy weapons parading through our streets and the streets of American cities.

As retired Gen. Jack Keane later said: “We don’t parade. We train and we fight, all right?”

Defense Secretary James Mattis did not appear too enthusiastic when he answered reporters' questions on Wednesday about the military parade. "I think we’re all aware in this country of the president’s affection and respect for the military," he said. Mattis went on to confirm that the Pentagon was in the early stages of planning the military parade and would send some options to the White House for a decision. He didn't comment on the potential costs of the military parade. But people like Colbert don't need the details in order to make fun of it.