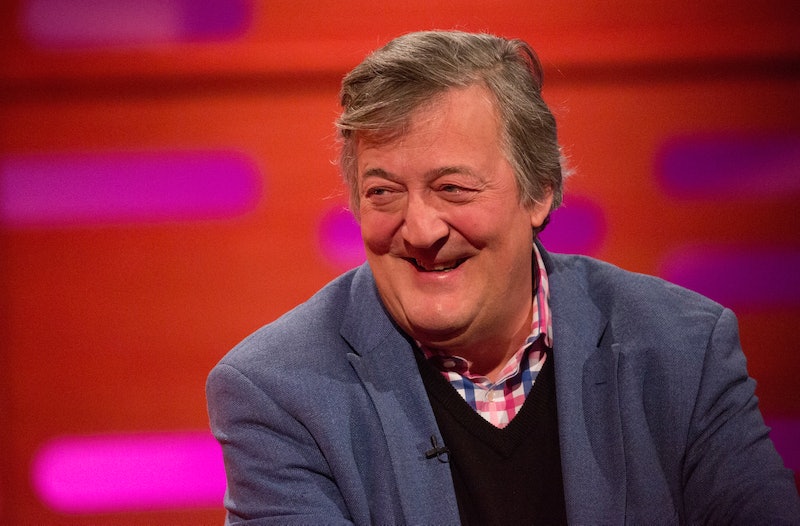 Stephen Fry — one of the most-loved British presenters — is set to join the wizarding world once again. Famed for his audio narration of all seven Harry Potter books, the 62-year-old is set to present BBC One's Fantastic Beasts: A Natural History. The documentary will feature tales of JK Rowling's mythical creatures alongside their real-life counterparts, exploring the wonders of both the magical and natural worlds.

Showcasing everything from centaurs and phoenixes to Nifflers and Erumpents, Fry will take viewers "on an incredible journey from the hidden corridors of London's Natural History Museum to the frozen steppes of Siberia and secret caves of Madagascar."

No release date has been confirmed. But, in a statement, the presenter commented: “I could not be more delighted to be a part of this magnificent opportunity for us Muggles to show the wizarding world that the fantastic beasts in our world are more than a match for theirs."

The documentary is set to run in conjunction with a groundbreaking exhibition at the Natural History Museum. Opening in spring 2020, per the BBC, it will see 50 museum specimens placed next to props from the Fantastic Beasts films. Not only will you be able to take a real deep dive into the newest Harry Potter franchise, but you'll be able to clearly see the similarities between Rowling's creatures and Earth's very own wonders.

"You'll recall the Erumpent's mating dance from Fantastic Beasts. We'll be making comparisons with the peacock spider, which has its own extraordinary movements that it uses to attract a mate," the museum's executive director, Clare Matterson, told the BBC.

"Then there's something in the magical world called a Demiguise, which, as the name suggests, has ways of making itself disappear. And, of course, there are all sorts of examples in the natural world but one of the most famous is the octopus which can change its colours and camouflage itself, blending into its natural surroundings."

Set to last for seven months, tickets for the magical exhibition will be on sale soon. It's almost too much excitement for UK Potterheads.

More like this
'Boiling Point's TV Sequel Is Set To Deliver A “Rollercoaster Of Emotions”
By Catharina Cheung and Sophie McEvoy
Rupert Grint Just Shared A *Major* Update About Ron Weasley’s Future
By El Hunt
'Happy Valley' Recreated This Moment From S1 In Its Penultimate Episode
By Sophie McEvoy
This Dark 'Happy Valley' Theory Is Staring You Right In The Face
By Sophie McEvoy
Get The Very Best Of Bustle/UK
Sign up for Bustle UK's twice-weekly newsletter, featuring the latest must-watch TV, moving personal stories, and expert advice on the hottest viral buys.