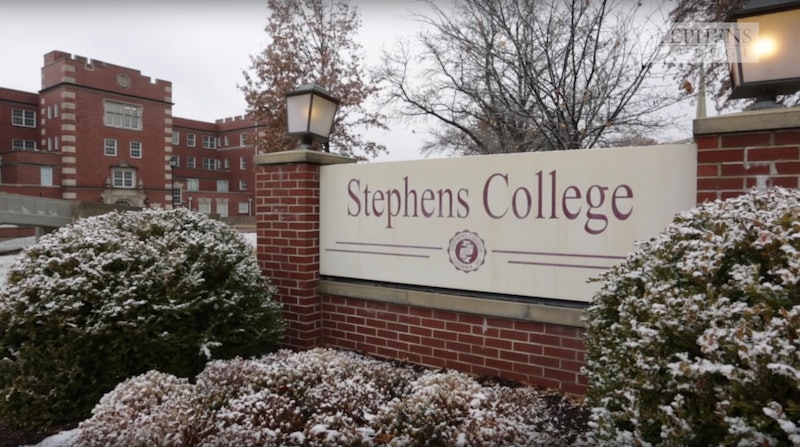 Many women's colleges have been updating their admissions policies to make them more inclusive to female transgender applicants in recent years, and now the second-oldest of them all has joined the wave. This month, Stephens College changed its policy to admit transgender female students.

"Consistent with our culture's expanding understanding of the definition of womanhood," the Missouri school's new policy reads, "the College's admissions policy will recognize both sex and gender identity in its determination of a student's eligibility for admission and enrollment." Stephens will keep enrolling women who were born female, but will begin letting in "students who were not born female, but who identify and live as women." It will also take "students who were born female but who identify as nonbinary, meaning students who experience their gender identity as falling outside the categories of man and woman."

Stephens is just the latest in a surge of women's colleges that have decided to formally start accepting transgender women. Mills College in Oakland was the first in 2014, but dozens of schools now admit trans women, according to a Vox analysis.

Some aspects of Stephens' new policy are more conservative than those of many other schools. For example, under its new rules, transgender women applicants "will need to provide legal documentation that they are legally women or that they are transitioning to female." That's a more rigid approach than, say, Smith College, which accepts students who self-identify as female even if they don't have documentation.

There are many reasons why a trans person might not have changed their gender identification on legal documents. Some states don't allow these changes unless the person has had surgery to transition, for example; then there's the fact that going through the required steps can be prohibitively expensive for some, or that some people may not want to "out" themselves for safety reasons. According to the National Center for Transgender Equality, about 79 percent of people who are transgender and transitioned don't have an updated gender marker on every one of their identity documents.

Additionally, Stephens' new policy explicitly excludes trans men, even if they decide to transition while enrolled at the college. Matriculated students who begin to identify as a man "will be allowed to remain at the institution only to complete the current semester," the policy states. "The College will work with the student to assist in the process of transferring to another institution." That puts its new policy among more conservative ones like South Carolina's Converse College and North Carolina's Bennett College, which also require students to leave if they begin to identify as men.

According to its fact sheet, Stephens' new policy is effective for "any applicant for admission or readmission to the undergraduate residential women’s program as of the fall semester of 2019." Bustle has reached out to clarify whether this means that it's in effect for students admitted to matriculate in the fall 2019, or that Stephens will start admitting people under the new policy in the fall of 2019.

"Stephens is evolving," the new policy notes, "just as it always has."