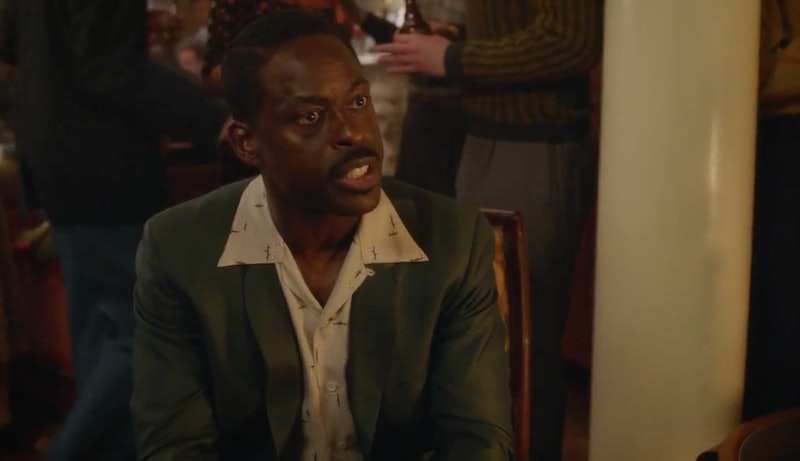 Spoilers ahead for Season 3 of The Marvelous Mrs. Maisel. One of the many (and perhaps most anticipated) new additions to the Season 3 cast of The Marvelous Mrs. Maisel is Sterling K. Brown, who joined the show after star Rachel Brosnahan famously begged him to at the 2019 Screen Actors Guild Awards. "I would do anything," she said after interrupting his red carpet interview with Entertainment Tonight. Right then and there, the actors shook on a deal, and almost a year later, it's finally come to fruition.

Before meeting Brown's character Reggie, Midge and Susie are introduced to a man named Lou at Shy's USO Christmas show. He calls himself Shy's manager, but when Susie later runs into Reggie at a party for the band, he sets the record straight. Lou is just "the white guy that record labels are willing to deal with." Reggie is the real "guard at the gate."

He's also the complete opposite of Brown's best-known TV persona, This Is Us' Randall Pearson. Within Reggie's first few appearances onscreen, two things are made clear: he's extremely committed to Shy, and he takes everything very seriously. He's rigid and over-protective, acting unofficially as the band's overbearing dad; in the few instances that he pops up, it's almost always to dole out stern looks and demands, which kind of undercuts any fun they're trying to have. That being said, it's obvious the band members respect him: they may mock him while drinking at a Las Vegas drag race, but they're still afraid of him finding out.

As for Brown, he hasn't yet said much about his Maisel character other than he likes what Reggie brings to the show, and that he really enjoyed filming Season 3. "He's black, which I think is really cool," Brown told Entertainment Tonight. "Maisel doesn't tend to get black that often, but when Brown shows up, it gets real Afro-American, which makes me happy."

He's also had nothing but good things to say about the show's creators, husband and wife Amy Sherman-Palladino and Dan Palladino. "The playground that the Palladinos create is so rigorous," he continued. "There [are] a lot of takes that are single takes. They write like, 90-page scripts that they still try to get out in roughly 60 minutes, so the pace is like that [snaps]."

Brown's appearances in Season 3 are just as quick, but considering the semi-last-minute add, perhaps he'll get a bigger role in future seasons.

More like this
The Black Lotus Staff Has "Had Enough" In The 'White Lotus' Spoof From 'SNL'
By Brad Witter
Darren Harriott Is Keeping His Love Life Away From The Spotlight
By Darshita Goyal
Keyla Monterroso Mejia Is Finally The Star Of The Show
By Gabrielle Bondi
This 'One Tree Hill' Wardrobe Error Is Going Viral On TikTok
By Brad Witter
Get Even More From Bustle — Sign Up For The Newsletter
From hair trends to relationship advice, our daily newsletter has everything you need to sound like a person who’s on TikTok, even if you aren’t.