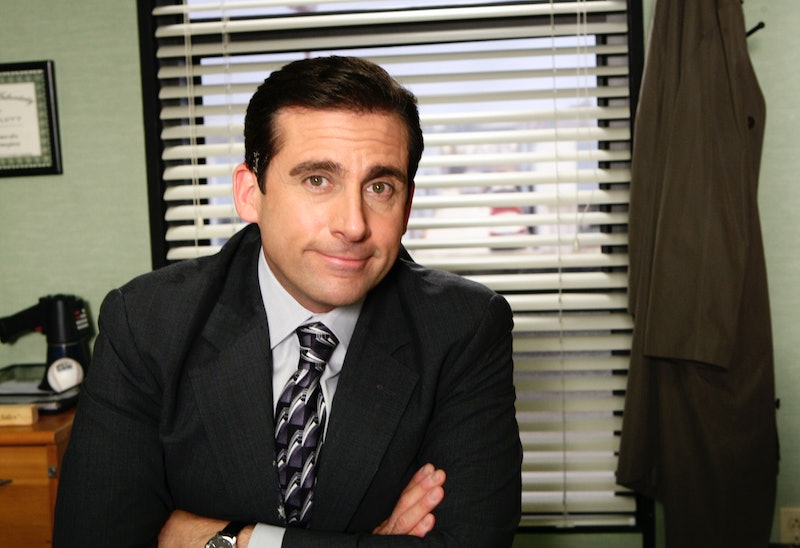 When the "World's Best Boss" Michael Scott departed Dunder Mifflin after seven seasons, many heartbroken fans didn't want to say goodbye. As it turns out, actor Steve Carell didn't want to leave The Office either, according to excerpts from Rolling Stone writer Andy Greene's oral history, The Office: The Untold Story of the Greatest Sitcom of the 2000s.

Bustle reached out to NBC and a rep for Carell, but did not receive an immediate response. "As I recall, he was going to do another season and then NBC, for whatever reason, wouldn't make a deal with him," claimed casting director Allison Jones, whose past credits include The 40-Year-Old Virgin, Parks and Recreation, and The Good Place told Greene, per an excerpt published by Collider. "Somebody didn't pay him enough. It was absolutely asinine. I don't know what else to say about that. Just asinine."

The Office's head hairstylist Kim Ferry echoed those sentiments, saying Carell supposedly "didn't want to leave the show" and had told NBC he intended to sign a new contract "for another couple years." Despite both the actor and his agent being on board, she further claimed to Greene that NBC let the deadline pass without making Carell an offer to remain on the series. "So his agent was like, 'Well, I guess they don’t want to renew you for some reason.' Which was insane to me. And to him, I think," she claimed.

Ferry added that she felt bad about perceptions Carell had chosen to leave the beloved NBC mockumentary comedy. She continued:

“[Carell] was like, 'Look, I told them I want to do it. I don't want to leave. I don't understand.' It just is mind-boggling how that happened. And I feel bad because I think a lot of people think he did leave the show on his own merit and it's absolutely not true. I'm telling you. I was there. I was there. He really wanted to stay. And it devastated all of us because he was the heart of our show."

As Greene noted in his book, Carell's exit came as Bob Greenblatt was taking over for Jeff Zucker as head of NBC in late 2010. Producer Randy Cordray explained to the author that he believed Greenblatt was "not as big a fan of The Office" as they had hoped and took the comedy "for granted." However, Greenblatt recalls a different timeline. "I think Steve was already departing the show when I arrived," he said. “I couldn't do anything about that since it preceded me."

Viewers still got the chance to see Carell return to Scranton when he made a guest appearance in The Office's May 2013 series finale. Even so, if many fans — and, apparently Carell himself — had their way, there would have been many more "That's what she said" jokes, courtesy of Michael Scott before that bittersweet ending.