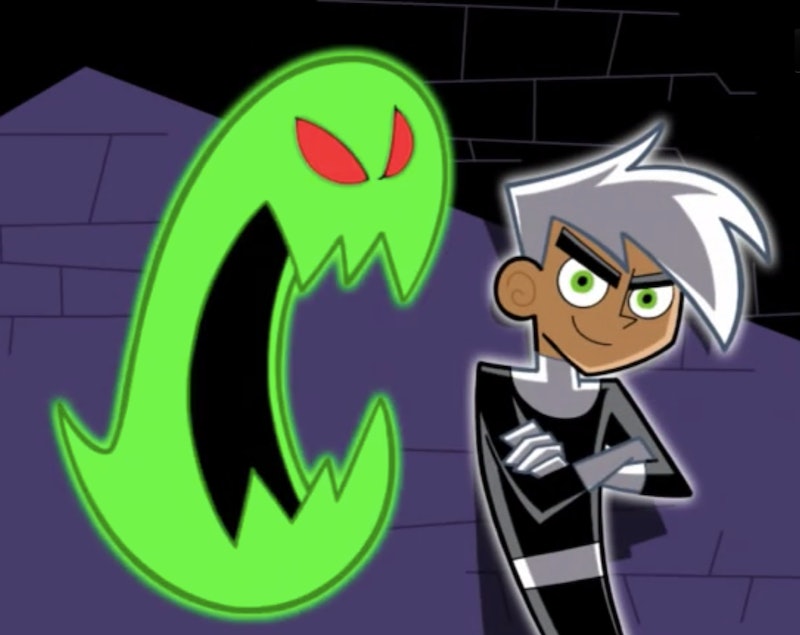 If you’re wondering why Hollywood is getting away with producing so many reboots that the word “reboot” has officially lost all meaning, the answer is me. Me, the full-grown adult woman in the third row watching live-action Aladdin; me, who spammed not one but five group chats when Disney+ announced a new series following 30-year-old Lizzie McGuire in New York City; me, whose obsession with getting a Danny Phantom reboot has reached such heights it's only a matter of time before someone duct tapes my fingers together to stop me from tweeting about it. I am the unrepentant reboot lover of your millennial-tinted nightmares, but that, my friends, does not make me any less right.

Before I launch into my 86-slide Powerpoint presentation about why we as a society would benefit from a Danny Phantom reboot, can we acknowledge that it is, in fact, a little weird that we haven’t heard any news about a Danny Phantom reboot? The 54-episode show following the shenanigans of Danny Fenton — the half-teenage boy, half-ghost trying to protect his city from malevolent spirits — premiered in 2004, meaning this year marked its 15th anniversary (prime timing!). It strikes a chord in the millennial set, and we are clearly eager to burn our money on nostalgic content (Lion King grossed $252 million worldwide). And now that we’ve seen the success of Marvel’s rebooted Spider-Man films — which offer a much more realistic, awkward teenager taking on the franchise — it’s clear there’s this space in the market that is begging to be filled (I maintain that Danny Phantom walked so that Tom Holland’s Spider-Man could swing).

Danny Phantom — which is currently streamable on Hulu — had all the action-based, banter-filled shenanigans of teenage superheroism, but was also grounded in the emotional vulnerability of its male protagonist. The tough decisions Danny had to make were never really about his powers, but always about his friendships with Sam and Tucker, his loyalty to his (admittedly oddball) family, and his very teenage attempts to reconcile his own self-interest with a sense of responsibility. Before the term “cinnamon roll” entered the millennial lexicon, before we started calling universally beloved characters “my son," there was Danny Fenton — the relatable, awkward teenage ghost with a salty heart of gold who anchored an entire compelling world. The characters were all well-developed, the storylines were ripe with potential, and the show was far more nuanced than the typical action-comedy on a children's network.

But my argument for what makes Danny Phantom a prime reboot candidate isn't just that it was a remarkable show; it was also, in its heart of hearts, a rom-com. It was delightfully, refreshingly, unrepentantly trope-y — from Danny dating a literal ghost hunter who is trying to kill his alter ego, to Sam and Danny as best friends alternately pining for each other, to a vengeful ghost pop star with the ability to cast love spells dialing up the drama. And if there is one thing we as consumers of entertainment can acknowledge, it's that we're in the midst of a rom-commaissance. Netflix is churning out feel-good romances. The Hallmark Channel's Christmas movie lineup is no longer something we feel ashamed of clogging up our DVRs, but actively celebrate with an event dubbed "Christmas Con." After the success of To All The Boys I've Loved Before and several other young adult novel adaptations, Netflix optioned several of YA author Sarah Dessen's romance-driven novels. The people of 2019 have spoken, and they want emotion-driven, compelling, funny narratives — and that's exactly what a Danny Phantom reboot would be.

Now, the real question is whether this reboot I am manifesting would be set in high school like the original, or somewhere 10 or 15 years down the line to match its now older audience. To that end, I'm ambivalent — I personally will watch it either way — but some insight into a potential direction may come from the show's creator himself. Butch Hartman, the show's creator, made waves in the still-existing cult Phantom fandom by posting a YouTube video in 2016 depicting all the characters aged up 10 years, along with an update of what they'd be doing in that hypothetical future. "Who knows?" said Hartman toward the end of the video. "You might just see that actually animated someday.”

All of this aside, Danny Phantom was just — in a word — fun. And isn’t that what we’re all looking for out of these reboots anyway? Something to tear our eyes off of the hellscape of Twitter, something to something to light up the ectoplasm in our nostalgic little hearts? Give me Sam chugging oat milk lattes. Give me Tucker ironically retweeting Danny Phantom fan accounts and hiding a not-so-mild ongoing obsession with Pokémon Go. Give me Danny working at a startup where he gets paid in free Cheez-Its instead of a living wage. And give me the exact same theme song from 2004, and do not dare touch a hair on its precious perfect head, because he's gonna catch 'em all, 'cause he's Danny PHANTOM.

If all of the above wasn't enough to sway you, then please, for just a moment, consider 13-year-old me. She had a big ghostly crush on Danny Fenton and she deserves a win. Thank you, Hollywood, for your consideration.

More like this
Ashton Kutcher Wants Danny Masterson “To Be Found Innocent” In Rape Retrial
By Jake Viswanath
This 'Gossip Girl' Wardrobe Error Has Gone Viral On TikTok
By Alyssa Lapid
Anne Hathaway Shared A "Thrilling" 'Princess Diaries 3' Update
By Darshita Goyal
Hilary Duff Is “Optimistic” About A 'Lizzie McGuire' Reboot
By Alyssa Lapid
Get Even More From Bustle — Sign Up For The Newsletter
From hair trends to relationship advice, our daily newsletter has everything you need to sound like a person who’s on TikTok, even if you aren’t.