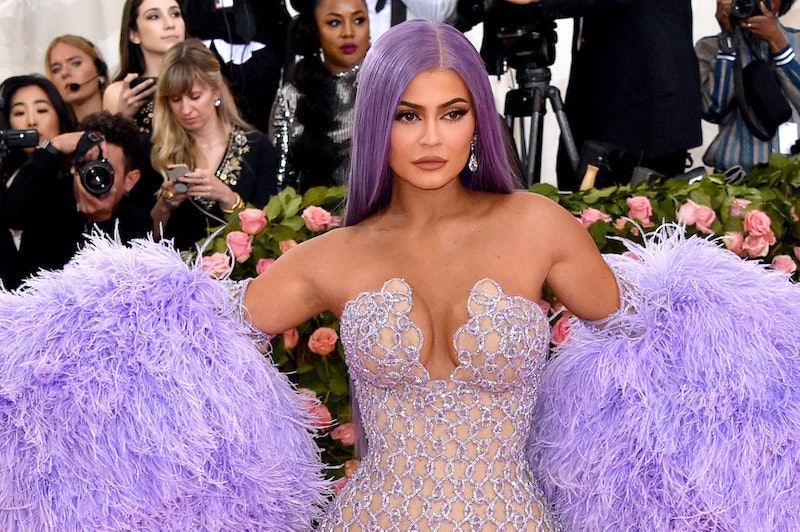 Celebrities ranging from Jessica Biel to Evan Peters to Nick Viall all got dressed up for Halloween weekend — and so did Kylie Jenner's 20-month-old daughter Stormi Webster. Instead of a spooky costume or cute animal outfit, Stormi dressed up as Kylie Jenner for Halloween, specifically the reality star's 2019 Met Gala look, taking the term "mini-me" to a whole new level.

On Sunday, Jenner shared photos of her daughter wearing a replica of her own purple, campy Met Gala outfit designed by Versace. Just like her mom, Stormi wore a glittery dress, complete with puffy sleeves and a light purple wig. The Keeping Up With the Kardashians star was clearly thrilled about her daughter's costume, captioning the post, "My baby!!!!!!!! i cant handle this!!!!" Donatella Versace even approved of Stormi's look, commenting, "So cuuuute!"

Since Halloween hasn't actually happened yet, there's a good chance Stormi has even more looks in store — especially if last year is any indication. In 2018, Stormi and Jenner wore several mother-daughter costumes, including dressing up as skeletons and matching pink butterflies. They also went a punny route, dressing like a cloud and lightning bolt to represent "Stormi Weather."

On The Ellen DeGeneres Show in September, Kris Jenner said Stormi is basically her mom's mini-me, explaining, "Sometimes... I have to remind myself, ‘That’s your granddaughter, not Kylie.’" Not only do Jenner and Stormi look so much alike, but they also share a close bond. The reality star opened up to Interview Germany in March about how much motherhood has changed her life for the better. She said, "The way that I look at things is a lot more positive and I really feel like my life didn't start until I had her."

Stormi isn't the only one in the Kardashian-Jenner universe getting into the early Halloween spirit either. Over the weekend, Jenner and her BFF Stassie Karanikolaou dressed up as Madonna and Britney Spears from the 2003 VMAs. Since Jenner and Stormi had multiple Halloween looks last year, their "Kylie Jenner" and "Madonna" costumes are probably just the first of many.

More like this
Looking Back At Kylie Jenner's Best Fashion Week Looks
By Allie Fasanella
Kylie Jenner Wore Platform UGG Boots, Kendall's Favorite Cheugy Trend
By Alyssa Lapid
Kylie Jenner Wore A Stunning Corset Dress For Paris Couture Week
By Dominique Norman
These Kylie Jenner's Lion Head Dress Memes Have Me On The Floor
By Allie Fasanella
Get Even More From Bustle — Sign Up For The Newsletter
From hair trends to relationship advice, our daily newsletter has everything you need to sound like a person who’s on TikTok, even if you aren’t.