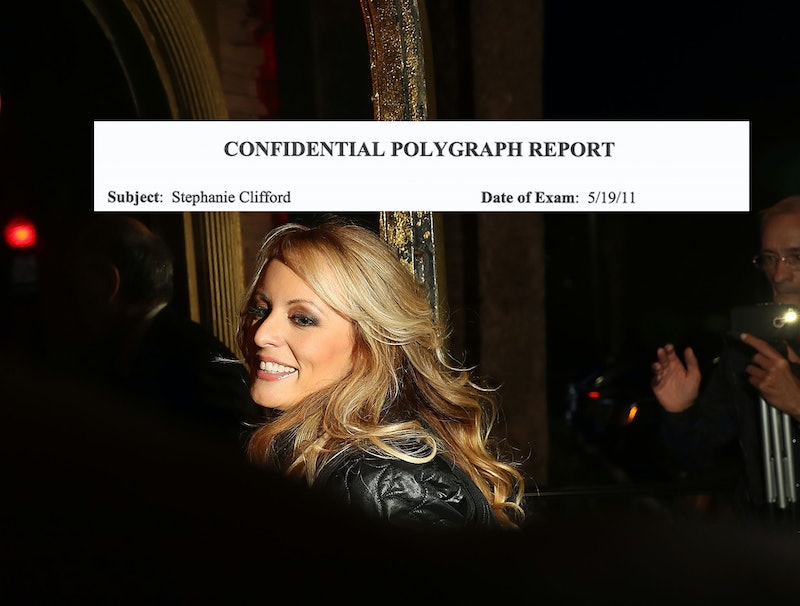 Seven years ago, in 2011, Stormy Daniels took a lie detector test that suggested she was telling the truth about having slept with Donald Trump in 2006, though he denies it. The man who conducted the exam signed a form this week testifying that he has "no reason to question the validity of any portion of the Report." But do lie detector tests always work? Here's what you need to know about these exams to understand the latest development in the Daniels-Trump saga.

Lie detector tests are known as polygraph tests, and they evaluate an examinee's physiological responses to being asked a series of questions. "The underlying premise is that an examinee will involuntarily exhibit fight-or-flight reactions in response to the asked questions," explained Aleksandra Slavkovic in a 2002 Carnegie Mellon paper. Often the examiner will repeat inquiries several times to watch how their subject's reactions change. The subject is generally asked "neutral" questions (unrelated and innocuous) and "control" questions (related, but not the focus of the test) so the reviewer can compare their responses.

What signals do examiners use to discern whether a subject is lying? When a person lies, "the autonomic nervous system will, in most cases, increase the person's blood pressure and sweating, and affect the breathing rate," Slavkovic writes.

But those are just examples of what might happen when one testifies to false information. There isn't actually one strict set of responses that accompanies lying. It's also possible to trick polygraphs: If someone sweats and pants during the test's neutral questions, for example, the reviewer may interpret those as "normal" responses for the person that couldn't be used to prove that he or she is lying at other points in the exam.

So polygraph tests definitely have significant room for error. To account for this, polygraph examiners have used a variety of ways to analyze their results over the years. Sometimes they'll use an automated algorithm. Other times they'll use a "traditional" scoring system. Ron Slay, Stormy Daniels' examiner, used both, which gave him two differing analyses.

Daniels' test focused on three questions, according to the examiner's report: 1, whether she'd had vaginal sex with Trump in July 2006; 2, whether the sex was unprotected; and 3, whether Trump told Daniels that he would put her on his show The Apprentice. Daniels answered "yes" to all three questions.

Slay's first analysis used an algorithm that, according to the exam documents, was "developed in the Applied Physics Laboratory of Johns Hopkins University." The computer found that Daniels' "probability of deception" was just 1 percent, meaning that there was just a 1 percent chance that she was lying on all of the questions.

The second analysis used a numerical scoring system that applies points based on whether or not a subject's physiological responses fit a set of criteria associated with lying. The American Polygraph Association explains that these reactions are compared to an idealized bell curve depicting how humans typically respond to a polygraph: Those who exhibit an extremely high number of either deceptive criteria or truthful criteria are rare, while most people fall in the middle.

By this more "traditional" method, Slay found Daniels' first two answers to be truthful, but considered the results of the third question to be "inconclusive."

Based on his two sets of results, Slay's conclusion was that Daniels was telling the truth about having unprotected vaginal sex with Trump. He said that "no determination should be derived regarding" whether or not he said he'd get her on The Apprentice.

The accuracy of polygraphs continues to be disputed. A 1998 Supreme Court case ruled against using lie detector evidence in certain courts because "there is simply no consensus that polygraph evidence is reliable."

However, polygraphs are still used widely. Daniels' test results may not be able to help her much as evidence in her ongoing court battles, but they could aid her more in the court of public opinion.