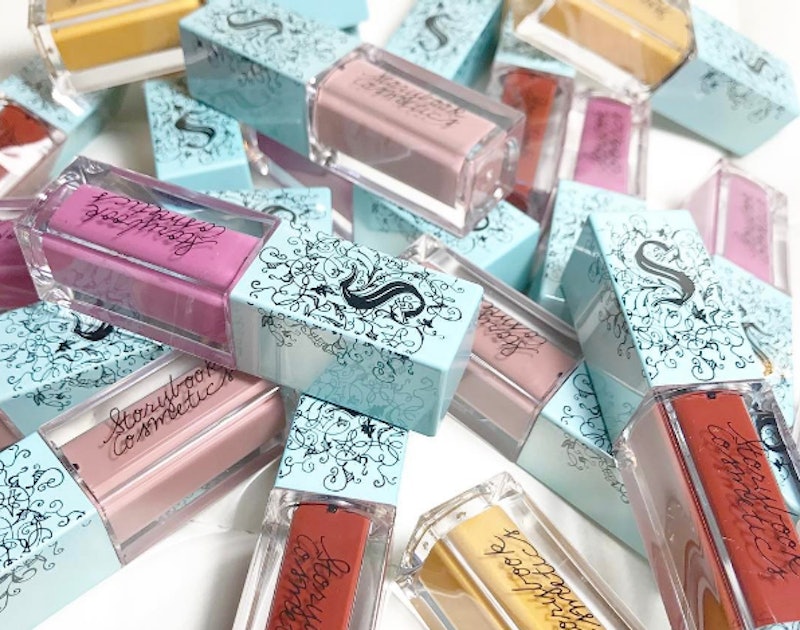 If Storybook Cosmetics has taught their fans anything, it's that when makeup and movies combine, magic happens. The brand already has a Charlie And The Chocolate Factory Palette in the works, and now they're adding yet another cult classic into the mix as well. Storybook Cosmetics is teaming up with Mean Girls on an official collab — cue the major fan freakout.

It's been 13 years since Mean Girls came out, but the one-liners and quotable moments are still alive and well. This partnership is proof. According to a press release issued by the brand, the collaboration will include a Burn Book Palette with 12 shades that will, of course, include a bright pink for you to rock on Wednesdays. I'm willing to bet that the other shades will be totally fetch and 100 percent Regina George-approved as well.

If you've been following the brand closely, you'll know that they teased a mock up of the concept earlier in the year on Instagram, but at the time the project was just an idea and not confirmed. Although it only included eight shades, there were names like "Wednesday" for a bright pink, a gold "Glen Coco," and bright orange "You Can't Sit With Us." Whether these shades will be included in the real palette or not, it's exciting to know that the collaboration is officially happening.

“We are incredibly excited to collaborate with Paramount Licensing on Mean Girls," said Missy Maynard, one of the sisters behind the makeup brand, in the press release. “We’re total Mean Girls fanatics, and this eye shadow palette is one of the first palettes we dreamed up! When we secured licensing for it we were ecstatic! We are so thrilled to give our customers what they have been begging us for!”

As you probably already guessed, there isn't an exact release date just yet. The brand did say that it will be available in 2017, which is pretty good news. Plus, while fans are waiting, there are still products like the liquid lipsticks, Charlie And The Chocolate Factory Palette, and the Quill & Ink Liner Set to come as well.

Bottom line: it's going to be one heck of a year for the brand, and you'll want to start saving for all of the incredible launches while you can.

More like this
15 Vegan Makeup Brands To Shop For Cruelty-Free Glam
By Audrey Noble
The 13 Best Cream Makeup Palettes, According To Experts
By Audrey Noble
This Week’s New Makeup Releases & More Beauty Headlines
By Audrey Noble and Erin Stovall
Caliray's New Surfproof Setting Spray Is The Ultimate Skin Refresher
By Olivia Rose Rushing
Get Even More From Bustle — Sign Up For The Newsletter
From hair trends to relationship advice, our daily newsletter has everything you need to sound like a person who’s on TikTok, even if you aren’t.