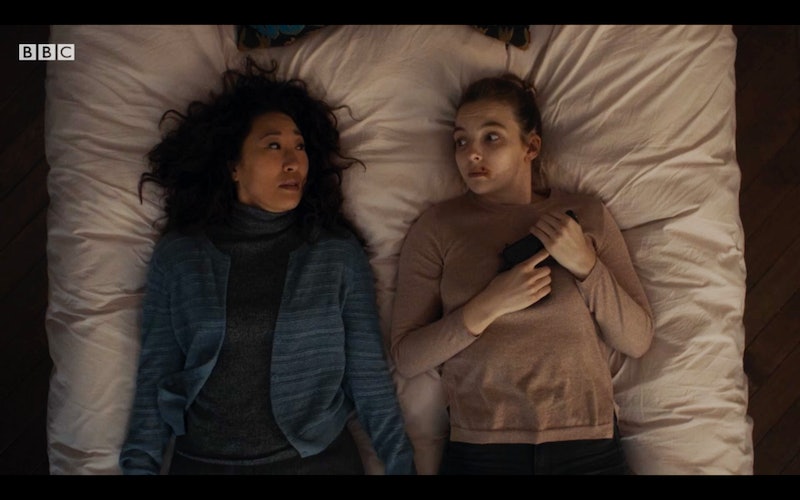 It has been another year of excellent television. Killing Eve, one of the best shows of the year, shot Jodie Comer into like, next level stardom. The Liverpudlian actor has been busy AF but it looks like maybe this year, she will be even busier, and in more of a dancing capacity. Yep, Jodie Comer revealed Strictly Come Dancing bosses have approached her about being a contestant on the hit show next year. Wow talk about hopping from one huge BBC hit to another.

So according to Comer it all happened when she got to go in the audience at one of the live shows alongside her family. Audience seats on Strictly Come Dancing are actual gold dust so I guess she might have pulled a few strings to get them. Good on her I say. Speaking to The Sun, she spilled what went down. The producers were basically all up in her grill.

Bustle have reached out to the BBC for comment, but it's easy to understand why they would be keen on her. Comer is proving herself to be a serious ratings magnet.

She obviously wanted to treat her mum and nan like queens though, and knows what they are into.

"I went with my mum and my nan because my nan is a Strictly superfan. It was a once in a lifetime for her so it was really fun."

TBH it's a miracle she had any free time at all to attend the show with her two main ladies. She is as busy as a bee. A bee that is literally killing it. And Killing Eve.

Comer started off her professional acting career with a bang and has been steadily on the rise. Her character in the critically acclaimed BBC thriller series Thirteen in 2016 brought her to everyone's attention, and after that, roles in shows like Doctor Foster and The White Princess proved she is definitely not a one hit wonder. But it is of course her role as the indomitable Villanelle in Killing Eve that she is best known for. So much so that fans of Strictly were low key worried a murder was going to take place when she was spotted in the audience.

And did she kill anyone? No, luckily not. However she almost definitely is killing people at the moment. Well, not quite this second nor actually in real life, but season two of Killing Eve is due in 2019. On December 14 Comer shared on her Instagram that filming had wrapped. "Thank you to the entire crew for making this experience what it was! We’ve been living in each others pockets for the last 6 months and it’s been a nothing but good times! Love you all so much," she wrote.

Comer spoke to Vogue about the upcoming season, which sadly we will be waiting some time for yet. She remained tight lipped about details, but she did share what she wanted for the character.

"I think there's constantly a mystery about who it is that you're seeing. You realise there's a lot of stuff bubbling away. I'm really fascinated by exploring that and also the relationship that Eve and Villanelle have found with each other, because it's something that I think Sandra [Oh, the actress who plays Eve] and I still haven't totally figured out."

Add to this that she is also involved in the upcoming film Free Guy alongside Ryan Reynolds and I guess it is almost definite that we won't be seeing her in full sequins next year. But, never say never.