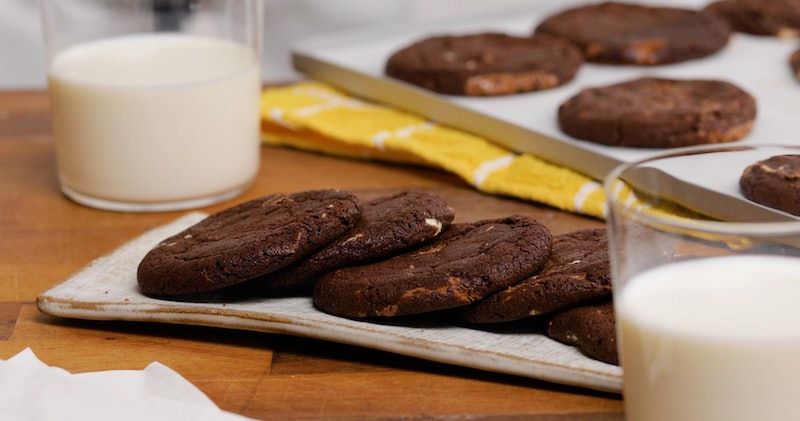 Although it's been a great time for home cooking, you'd be forgiven for pining after your favourite restaurants and take away places right now. Take for example the humble purveyor of foot-long sandwiches, Subway. For fans of the international chain who tend to spring for a meal deal, there's nothing quite as delectable as their famous double choc cookies. The recipe for which has been a close-kept secret...until now. Subway has shared how to make their double chocolate cookies and they're (almost) as good as the real thing.

Subway, hot on the heels of other beloved chains such as Wagamama, has decided to share a few of their much-loved recipes on the Tastemade UK Facebook page. Keep reading for all the details on how to make their double chocolate cookies at home.

Preheat your oven to 175°C. If you have an oven thermometer, use it to ensure the temperature is spot on. Line two large baking trays with baking parchment, braced to take your cookie dough.

In a large bowl, mix the butter and both sugars. Using a wooden spoon, cream the mixture until light and fluffy, which should take approximately three minutes.

After lightly beating the egg and vanilla together, add them to the butter mixture a little at a time, beating until the mixture is well combined.

Using a wooden spoon or spatula, fold through the sifted flour, cocoa powder, and baking soda until they're combined. Then add the white and milk chocolate chips, mixing until evenly distributed. Ensure that you don't overwork the mixture.

Using an ice cream scoop or spoon, divide the mixture into 16 Golf ball-size portions. Roll the equally sized portions into ball shapes and place onto the lined baking trays, spaced at least 5cm apart so they have room to spread.

Bake for 12 minutes until well spread and just set on the surface. They'll still be quite soft initially so allow them to cool. Leave on the tray for five minutes and then carefully transfer to a cooling rack to cool completely.

Although it's unlikely that any will survive the day, if you want to store them keep them in an air tight container for up to seven days. Another great idea is to freeze uncooked dough balls to use at a later date, placing them onto a lined baking tray and baking as usual for ten to fifteen minutes.