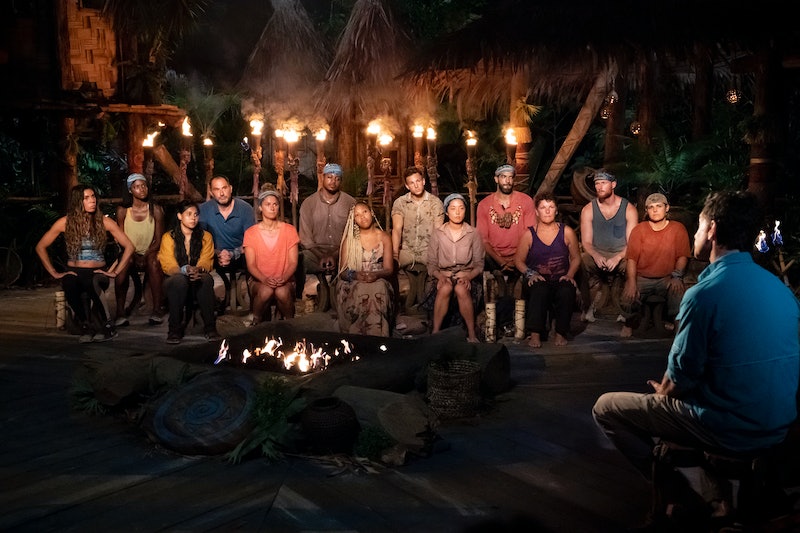 Survivor Season 39 has officially transformed from a typical game in the jungle into a season of change and lessons learnt. Survivor host Jeff Probst apologized to Kellee Kim during the season finale on Wednesday, Dec. 18, after her headline-making experience with fellow contestant Dan Spilo, who ended up being removed from the game for multiple instances of alleged inappropriate behavior. Bustle previously reached out to Spilo about this incident, but did not receive a response.

During the historic finale, from which Spilo was uninvited, the host acknowledged the pain that Kim went through after speaking out about Dan's behavior and then getting voted off from the game before he eventually was kicked off. “You were right,” he told Kim, as reported by Entertainment Weekly. “You were right to speak up. You were right to step forward despite a lot of risks. And to speak your truth. And I want to acknowledge and apologize for your pain. You didn’t ask for it, you didn’t deserve it.”

Kim was receptive to the apology, and once again advocated for changes to be made for how the show addresses these situations. “We can’t really go back and change what happened to me and what happened to other people,” she said. “I think the most important thing when I think about this situation and what have you is that I hope that this season of Survivor isn’t just defined by inappropriate touching or sexual harassment. I hope that is defined by change."

Just a day before the finale, CBS and Survivor announced new rules and guidelines, specifically regarding how contestants can report inappropriate behavior that will be implemented as a result of Season 39. The new policies include a rule that explicitly states "unwelcome physical contact, sexual harassment and impermissible biases" are not permitted as part of gameplay. Future contestants will receive new anti-harassment and sensitivity training, and the show will now provide an on-site professional that castaways can report any issues to, so production can address them without affecting the game.

"I feel like I can be really proud of the fact that I spoke up and asked for those changes, and CBS and Survivor are making those changes because I asked," Kime said on the finale. The Season 39 contestant also took to her Twitter to express gratitude that the network and production are taking her concerns to heart.

Kim also told EW about the importance of these changes in a separate interview. "The apology, it feels really good. But I think what’s most important about the apology is this idea of taking responsibility," she explained. "You can put in policies and procedures, but unless you have the heart and the intent to actually make those changes, things aren’t going to be different." Hopefully, some thing are actually about to be different on Survivor so no contestant has to go through this again.