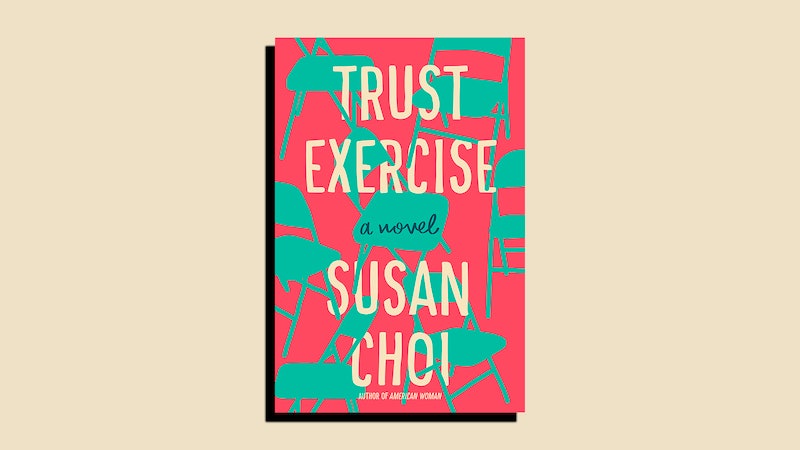 Joan Didion had no idea, while writing The White Album, that the book would contain one of the most misinterpreted quotes in literature: "We tell ourselves stories in order to live." It’s always truncated to read as an exaltation of storytelling. It’s not. No one pulls apart that misconception better than Maggie Nelson in The Red Parts. Didion’s real point, Nelson argues, is that stories more often distort, mythologize, and omit than illuminate. If you finish The White Album, you will find that Didion admits she gleaned no insight from the events chronicled.

I found myself thinking of Didion while reading Susan Choi’s Trust Exercise, a novel within a novel about high school life at a prestigious art school. Choi is often called a writer’s writer, so it’s unsurprising that the work is, in part, an analysis of fiction itself. It's 257 pages of contemplation on the trust readers do place or don’t place in a narrator. Initially, I was disappointed, because books intended for writers typically don't pique my interest; however, about halfway through, my perspective shifted. I noticed a latent theme emerging.

Underneath the layers of meta-fiction, I found a quietly radical novel of the #MeToo movement.

Like many women, I've been angry all day, every day for the last three years. This anger has led me to reflect on the stories I have been told —and the ones I have shamefully told myself. These stories — justifications, really — gave certain men a pass, rationalized behaviors that should have been obviously unacceptable. I needed lenient narratives to quell my rage, and to live unperturbed by truths too painful to confront.

Trust Exercise is a story of sexual abuse, told in three parts, that implicates everyone, including me, who has succumbed to stories that sanitize reality.

Choi started writing the book in the early stages of the re-energized #MeToo movement in 2017. It was originally intended as a side project, but it became all-consuming after her divorce, which coincided with the release of the now-infamous Access Hollywood tape. In a post-publication interview with Vulture, Choi said she was angry while writing the novel, and that anger led her to reflect on relationships she witnessed or experienced in her youth, like the romances between high school girls and older men, or the seductions of graduate students by their male professors. The relationship between powerful men and much younger women is, unsurprisingly, a recurring motif in Trust Exercise.

Her anger is palpable, yet she eschews an outright narrative of victimhood.

Part One of the book recounts a short-lived romance between two high school students, Sarah and David, in the 1980s. Both are enrolled in Citywide Academy for the Performing Arts (CAPA), where their courtship attracts the attention of drama teacher Mr. Kingsley. He is a larger-than-life teacher whose charisma compels students to vie for his attention, a power he exploits. He forces students to humiliate themselves under the guise of acting exercises. He becomes inappropriately close to Sarah, masking his voyeuristic interest as recognition of her talent. He has a sexual relationship with a male student — possibly multiple male students — yet his behaviors are viewed as more unconventional than predatory by parents and the general public.

In Part Two, the students of Mr. Kingsley's class are now adults. Readers learn a minor character from act one, Karen, dated a 40-something visiting professor from England named Martin during her teenage years. In adulthood, Karen’s emotions about the romance are complex. Her anger is palpable, yet she eschews an outright narrative of victimhood. The relationship with Martin was damaging, yes, but the romance was her choice — at least, she wants to believe this.

Trust Exercise does not excuse predatory men, but it does explore them alongside culturally ubiquitous narratives that normalize their behavior.

Choi is interested in the boundaries of victimhood. In the aforementioned Vulture interview, she said Trust Exercise is not about "vampire men and victim girls." Instead, it's an exploration of how perspectives differ, depending on privilege and gender. Choi cited the Kavanaugh hearings as an example: "You may not even remember the sorts of damage you might’ve inflicted on someone because they didn’t even register to you at the time." Trust Exercise does not excuse predatory men, but it does explore them alongside culturally ubiquitous narratives that normalize their behavior.

The second section of the book made me recall Louis CK’s never-released film I Love You, Daddy, inspired by Woody Allen’s Manhattan. Both films tell stories of middle-aged men romantically involved with teenagers. These relationships are presented as dysfunctional but mutually beneficial. Neither filmmaker seems aware of the possible damage inflicted on the women, a mentality mirrored by Trust Exercise’s David when multiple allegations of sexual misconduct surface against Martin. Adult David is a drunk, and he is desperate to hang on to his high school glory. He chocks the investigation up to a witch-hunt, a sentiment he relates to Karen. Of course Martin slept with his students, but what of it? They knew what they were doing. When Karen points out his students — including her — were children, David replies, "We were never children."

There it is: The story so often repeated in media, the tale of precocious teenage women. The special nature of the actress or the poetess serves as a protective shroud. Artists are never really children, after all, and their wise-beyond-their-years nature means they’re prepared for adult experiences earlier than most. The proclivity towards unconventionality, born from a creative soul, erases unbalanced power dynamics altogether. Those who see otherwise are unenlightened, too encumbered by moralistic notions of normalcy to understand. A witch-hunt, indeed.

Karen clearly wants to believe this narrative. She is angry, smart, in possession of an impeccable memory rendering her precise and scattered all at once. She speaks in a dissociative back-and-forth between first and second person, often pausing to offer dictionary definitions of terms that evade her. It’s an attempt to file her coming-of-age away under some comfortable classification. She asks herself, "Did it matter that the person who unleashed Karen’s floodgates was much older — even older than she knew? Did it matter that he was a liar? Did it matter that he had practice and she had none?" She was not, she notes, "a special kind of victim." She knows her experience was not uncommon given all the plays and movies about such occurrences.

Many women, especially those who have been traumatized, have internalized the idea that being harmed by men is a perverse rite of passage.

Choi’s The Foreign Student is about such an experience. Choi said the story, about a middle-aged professor romancing a 14-year-old, felt "deeply familiar and inevitable" during its writing. But why? With Trust Exercise, she told Vulture, she began to ask: "Why does it feel so inevitable?" to write stories of sexual trauma.

Many women, especially those who have been traumatized, have internalized the idea that being harmed by men is a perverse rite of passage. Many have told me that considering their experience to be inevitable helps them maintain autonomy. No one wants a formative experience soured upon the recognition it was abusive. No one wants to erase the magnitude of their coming-of-age by becoming something acted upon. The notion that such occurrences are inevitable can force them into CK and Allen’s version of events – dysfunctional, but beneficial. The women involved were treated harshly, but it was a necessary step into adulthood. Believing this is an attempt to live unencumbered by anguish.

The novel ends in modern times, in a section told from the perspective of a new character named Claire, whose name we are told means clarity. She arrives at CAPA to seek assistance in her search for a lost relative she believes attended the school. A teacher, under the guise of offering help, assaults Claire when she meets with him in private. He is quick to call the assault a misunderstanding.

Claire does not shoehorn the incident into a narrative about the necessary scars of womanhood. Instead, she seeks therapy immediately. There is no easy conclusion, of course. Claire is confused. Didion’s full quote is about looking for the sermon in the suicide, the moral lesson in the horrific murder. It's about our collective need to force experience into a sensical narrative. But trauma often lacks denouement or satisfactory endings.

The one hope Trust Exercise offers is that Claire recognizes that the assault was not a misunderstanding. Her experience is tinged by #MeToo movement, a collective shedding of stories that distorted, mythologized, and omitted the painful truth. Claire, at least, seems to understand that women's pain is not inevitable.