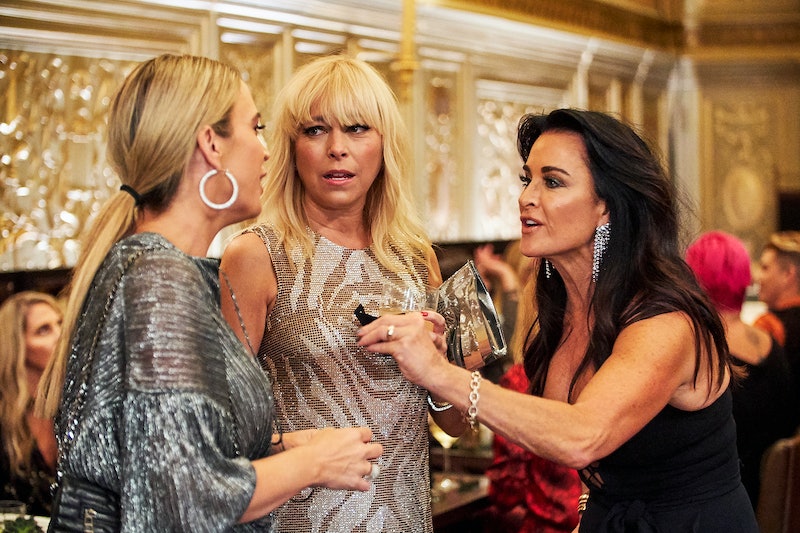 Although she was first announced as a full-time cast member, Sutton Stracke from RHOBH will only play the "friend of" role on Season 10 of the Bravo reality series. "I feel bad about what happened to her, and it sucks," cast mate Erika Girardi told Entertainment Tonight of Sutton's absence from the RHOBH Season 10 trailer. "I've actually enjoyed getting to know Sutton. She's a very sweet person [and] she has some great points of view."

Bravo describes Sutton as a "southern debutante-turned-Beverly Hills-socialite," who was born and "conservatively raised" in Augusta, Georgia. In her early 20s, Sutton moved to New York City as an aspiring professional ballet dancer, and she eventually became the Cunningham Dance Foundation’s Director of Development and the Augusta Ballet’s Executive Director.

Expect her "famed star-studded soirees" to be featured in RHOBH Season 10: Not only did The Salonniere name Sutton a Top Party Host in America alongside Oprah and Michelle Obama in 2017, but she also has a luxe Bel Air mansion filled with nods to her Southern roots to throw them in. Sutton also owns an estate in Augusta and a three-bedroom apartment in Manhattan, according to her Bravo bio.

In 2000, Sutton married her childhood friend, Christian, with whom she shares three children: 17-year-old daughter Porter and sons Philip, 15, and James, 12. The couple divorced in 2017, however, and, according to ET, reports suggest Sutton’s ex-husband not wanting their kids to appear on the show is to blame for her shift to "friend of" status. She recently began dating her boyfriend Michael, whom she met online.

RHOBH stars Erika, Lisa Rinna, and Kyle Richards have all campaigned for Sutton to be restored to full-time cast status, but Season 10's new Housewife Garcelle Beauvais admitted to E! News that they "didn't connect" right away. "I think she took offense to... I said to her, 'We don't all have to be friends, you know, best friends,'" Garcelle explained. "And my thing was that in real life, you're not best friends with everybody, you know? So I wanted to get to know her." Teddi Mellencamp also told the Daily Mail that she and Sutton got off to "a rocky start."

As for her upcoming professional projects, Sutton is launching a West Hollywood concept store called SUTTON, which will reportedly offer clothing, furniture, art, and decorative furnishings. According to Bravo, she sees this as the perfect outlet to focus on "once her children leave the nest."

As for how much of the void left by Lisa Vanderpump's Season 9 exit Sutton will fill, fans will have to wait and see.