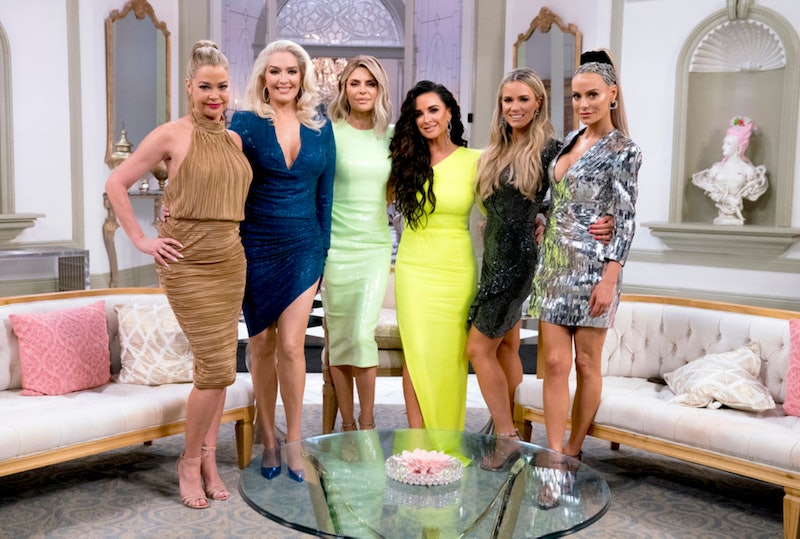 Out with the Lisa Vanderpump, in with the two new The Real Housewives of Beverly Hills stars. RHOBH Season 10 will introduce two new cast members to the fold, Bravo’s The Daily Dish announced on Thursday, Aug. 29. There have been whispers in the Bravoverse winds about who may or may not step into the spot that LVP vacated earlier this year, and would you look at that? We're still a ways away from Season 10 (the premiere date hasn't even been announced!), and we already have our official answer. And what an answer it is: Garcelle Beauvais and Sutton Stracke are set to join the Beverly Hills edition of The Real Housewives.

So who are our two new Beverly Hills Housewives? First up is established model and actor Garcelle Beauvais, who will be the first black woman on the show's roster. You may recognize her from NYPD Blue. Or The Jamie Foxx Show. Or Franklin & Bash. Or Models Inc. Or Grimm. Or Spider-Man: Homecoming. Or any of the other bajillion TV shows and movies she’s acted in. RHOBH loves a star of small and/or silver screen, and Garcelle's no stranger to being in front of the camera.

In a statement provided to The Daily Dish, Garcelle said,

"I am excited and proud to be joining the cast of such a wildly popular and beloved show like The Real Housewives of Beverly Hills. As a working actor who has been in the industry for some time, it’s exhilarating to have the opportunity to delve into a new chapter in the entertainment spectrum. As the first African American Housewife in the Beverly Hills franchise, I am honored and humbled by this awesome opportunity to exemplify the fact that Black Girl Magic lives and thrives in every zip code! Already being intimately familiar with the spotlight of Hollywood, my journey of successes and trials has already been chronicled and shared with my many loyal supporters around the world. The continual encouragement, support and yes, even at times, criticism, have helped make me the dynamic woman I am today. I’m excited to share the many ongoing daily surprises, laughs and joys of being a working mother in today’s crazy world. The hustle is R-E-A-L! No games, all heart and a little dash of fashion-filled sass is what you’ll get when you step into my sphere…and I wouldn’t have it any other way!”

RHOBH veteran Lisa Rinna congratulated her longtime pal in a series of posts on Instagram Stories, including this photo that was taken by Getty Images in 2006 at the launch party for Roberto Cavalli Vodka:

The other new addition to the cast is Sutton Stracke, a debutante whose party planning skills once landed her on The Salonniere's list of l00 best party hosts in the US. This one's ben in the tea leaves for a bit: Earlier this month, Hollywood Life shared that Sutton was "highly rumored to be the new addition." And what do you know, she's one of the new additions.

“I am thrilled and honored to be joining The Real Housewives of Beverly Hills. As a mother to three children who is also deeply committed to my efforts in philanthropy, my life is a balancing act. There is a lot going on in the best way possible and I strive to pursue all of my passions to the fullest. I am excited to share my true loves of art and fashion design, and open the doors to my world. I am looking forward to this ride and where this journey takes me. Fun times ahead for this Southern Belle in Southern California!”

And what do you know (part two), she also happens to be pals with Rinna.

As for the rest of the show's lineup? It looks like the Season 9 cast (minus LVP, of course) is staying put. According to Entertainment Tonight, Rinna, Denise Richards, Dorit Kemsley, Erika Jayne, Kyle Richards, and Teddi Mellencamp will all reportedly be back for RHOBH Season 10. Cannot wait.

More like this
Kathy Hilton May Not Return To 'RHOBH' — At Least Not Full Time
By Jake Viswanath
Everything To Know About 'RHOA' Season 15
By Gretchen Smail
'RHOSLC’s Newest Cast Member Has Tried To Become A Housewife Before
By Jake Viswanath
‘RHOSLC’ Star Jen Shah’s Arrest & Legal Drama, Explained
By Brad Witter and Jake Viswanath
Get Even More From Bustle — Sign Up For The Newsletter