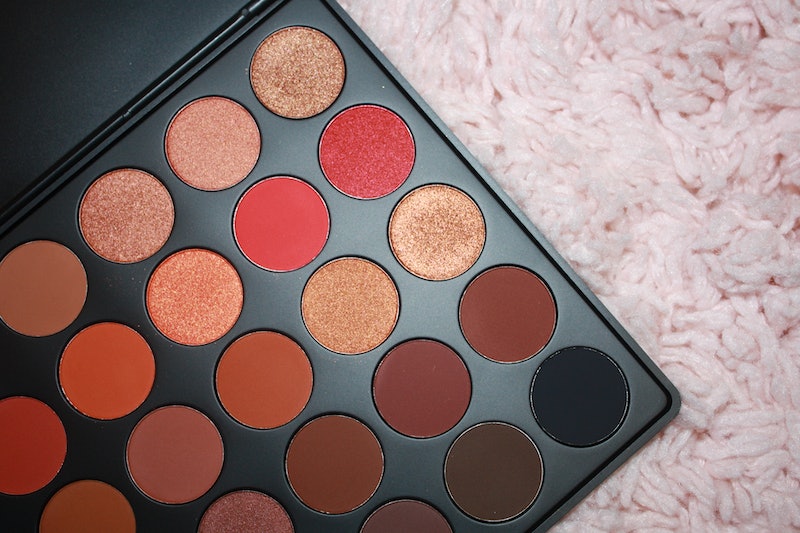 The brand that brought you the palette heard all around the makeup world is back with a timely update. Just in time for fall, Morphe has updated their iconic 35O Palette. It's filled with shades of a similar color scheme with a brand new formula. But if you're wondering if the Morphe 35O 2 Palette is worth it, the short answer is that it depends. Here's everything you need to know about the big sister to the 35O so you can decide for yourself.

If there's one thing that Morphe knows best, it's eyeshadows. The brand is known for their massive 35-shade palettes and the 35O is without a doubt the most popular. Until now, that is. The infamous palette is getting a massive remake that's even better than before, if you can believe it.

The setup is the exact same as their previous palette, and the shade range is still the same, too. The matte black container holds 35 shades of reds, browns, and oranges. The kicker is that the formula is brand new and the colors are a heck of a lot brighter.

Although not all of the details have been released just yet, Morphe did announce that the 35O 2 Palette will be available on Oct. 12. Thankfully, I have the rest of the details for you. Morphe sent me a palette in the lead up to the release.

To a Morphe-a-holic, it's clear to see at first glance that there are some major updates to the palette. The colors are a heck of a lot more bold and there are a lot less brown shades than the first time around. There's a mix of shimmers and mattes, with transition shades and bold pops of color.

It's not until you dig into the palette that you can see just how different the shades are though. The 35O 2 Palette has a brand new formula. Well, sort of. The formula feels more like the shades in the Jaclyn Hill Palette than the original 35O.

Both the shades and mattes are buttery and extremely creamy. That translates to major pigmentation and high shine. Unlike the original 35O, which require some building to see color payoff, this one packs a serious and immediate punch.

That's not the only similarity to the Jaclyn Hill Palette, either. Some of the shades are almost exactly the same in the two kits — specifically some of the shimmers. Do with that what you will.

The main difference between the original and new 35O Palette is the bright reds in the palette. There were deeper, brick reds on the first time around, while the new ones are bright and in-your-face. It's worth noting that they are extremely wearable though.

I was a little hesitant to use the red shades when I first opened the palette, but I was pleasantly surprised once I did. Because there are so many shades that compliment the inside, there are tons of options for eye looks.

Of course, with every launch there are a few downfalls. For me, that was the massive amount of browns in the palette. I know that the entire point is to have a variety of similar shades, but there's almost too many.

As of Oct. 2, the brand has yet to announce the price of the 35O 2 Palette. The original 35O is priced at $23, which is part of what makes this palette so popular. There's a good chance that the price of the upgraded palette will be a bit higher, since there's a new formula.

Bottom line: You should probably set aside some money and get your alarms ready if brown shadows are your go-to. Thank me later.