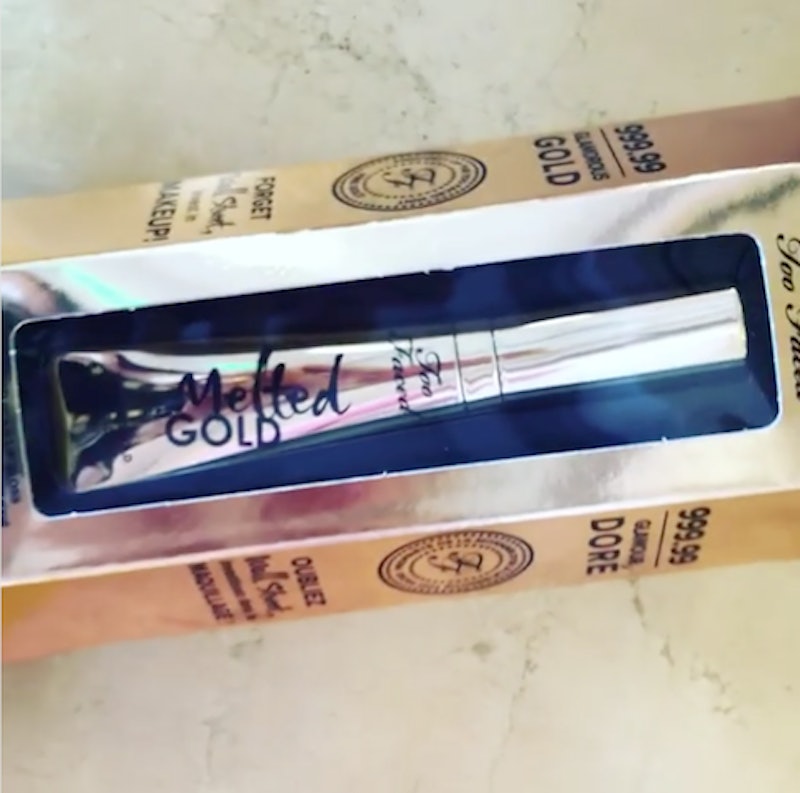 It's official: 2017 will go out with a bang in the makeup world. Thanks to Too Faced, a new golden makeup collection is at our fingertips. Just when you thought Too Faced had reached its glitter quota, this December a Melted Gold Lip Gloss will be added to its holiday collection.

Just how gold will this lip gloss be? So incredibly gold. So gold in fact that Too Faced co-founder and chief creative officer Jerrod Blandino says the lippie actually contains 100% real gold in its formula.

The shades currently featured in the Melted collection are all pretty dope, but it’s the formula that has makeup lovers flippin’ out for Too Faced lippies. According to Popsugar, they go on smooth and have substantial staying power. That’s a very beautiful thing because if you’re going to invest in a golden lip gloss, you certainly don’t want to be leaving little flakes of gold on your coffee cups and kissing partners.

Nothing screams treat yo’self like having your lips dripped in gold. While there’s no substantial evidence that a golden gloss will do anything other than make your lips say bling, bling, sources at Stylecraze boast about anecdotal evidence that gold can increase the skin’s elasticity and combat dryness.

Dr. Paul Jarrod Frank explained to InStyle that the benefits of gold can be attributed to its natural anti-inflammatory properties and when applied topically. He added those donning gold in their skin routine may see a decrease in acne and hyperpigmentation.

What does all this gold mean for our lips? Well, gold is believed to lock in moisture. Too Faced isn’t the first to attempt to put its consumers in gold and, fortunately, it won’t be the last. It’s pretty exciting to be able to get the aesthetics and skin benefits of a golden lip.

Now, obviously, having a gold skin care regimen would cost some serious dough. But with Blandino’s creation of a gold speckled gloss, it’s only a matter of time before consumers are dipped in gold like a late 90s Lil Kim video.

Whether the beauty of gold lies only in the surface or not, one thing this gloss has definitely got going on is a seriously potent gold color that will make you want to kiss yourself when the ball drops on New Years. The shimmery color shown in a sneak peak on IG literally sparkles with irresistible gold flecks.

From the video, you can tell the gloss will be opaque, easily applied with one swipe to the lip, and the metallic glitter takes on a life of its own. It’s not clear from the sneaky-peaks if this gloss will come with a “Do Not Stare Directly At Your Lips for Extended Period of Time” warning, but with that type of sparkle, who knows?

Too Faced will be bringing its golden glosses to the public in December, joining the Chocolate Gold Palette in the holiday collection. Who knows what else could be coming our way this December? I’m looking forward to seeing some platinum cut, iced out lips on the regular.