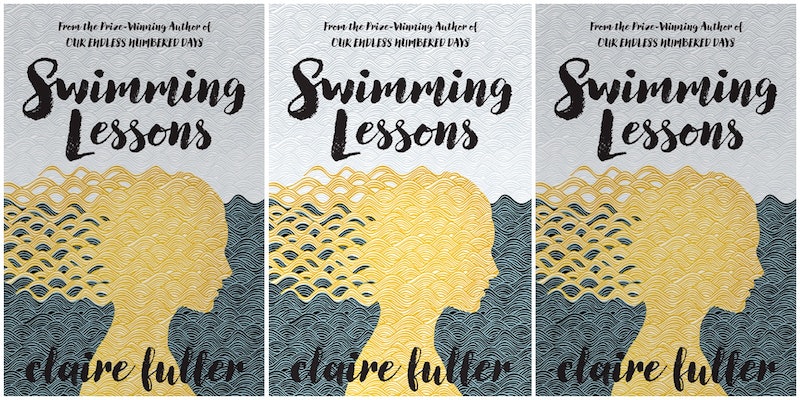 The novel alternates chapters between two interconnected storylines. First, there's the story of two daughters who have returned home to care for their author father, Gil, who has been hospitalized after a traumatic incident in which he believes he saw the girls' mother, Ingrid, a woman who disappeared years earlier. The other chapters are written as letters from Ingrid to Gil. Before she left, Ingrid hid each of these letters in different books within Gil's enormous collection.

The decision to have Ingrid leave the letters in books was inspired by the author's real-life romance. Before they married, Claire Fuller and her husband would pen love notes to each other and hide them in each other's homes. "We wrote five each, and Tim found all of his when he packed up and moved in with me," Fuller tells Bustle. Unfortunately, she hasn't yet found all the notes he hid for her. "I think there are still two notes in the house that we share together that I haven't found," she says. "And I think they're in the books, because we have so many."

After each of Ingrid's letters, Fuller includes the title, author, and publication date of the book in which the note was hidden. These are all real books, and some of them have a very personal meaning to the author. "Some of them I chose because they're books that I love and know," she says. "Things like, Small Dreams of a Scorpion by Spike Milligan is a book of poetry that my dad had when I was growing up and I loved. And We Have Always Lived in the Castle (by Shirley Jackson) is one of my absolute favorite ever books." However, others she selected purely by chance. "Some of them were completely obscure and I just kind of Googled books about crocheting or mothers or whatever, and came up with these fantastic titles," Fuller says.

From beginning to end, the novel is infused with a delightful sense of bibliophilia. Gil, in particular, is obsessed with readers' relationships to their books and the things they leave behind in those books, such as margin notes. This is no coincidence; Fuller, too, loves a book that has been jotted in, highlighted, and marked up. "I think that if a book has been well-used — and you can tell that it's been well-used — chances are it's probably been loved, and someone's read it all the way through," she says. "Whereas a pristine book, it might look nice, but it might mean that no one's actually read it."

Indeed, marking copies of books also shows a remarkable level of engagement with the text — something which Fuller is passionate about. Swimming Lessons is crafted so that the reader must interpret the clues for themselves, particularly the clues concerning the mystery of Ingrid's disappearance. "I do like the idea that the reader walks away with some questions, and so that the book continues in their heads after they've finished it," Fuller says. "They have to do some of the actual work in a way. It's not just up to the writer, it's up to the reader. I want [my readers] to go away thinking about it more."