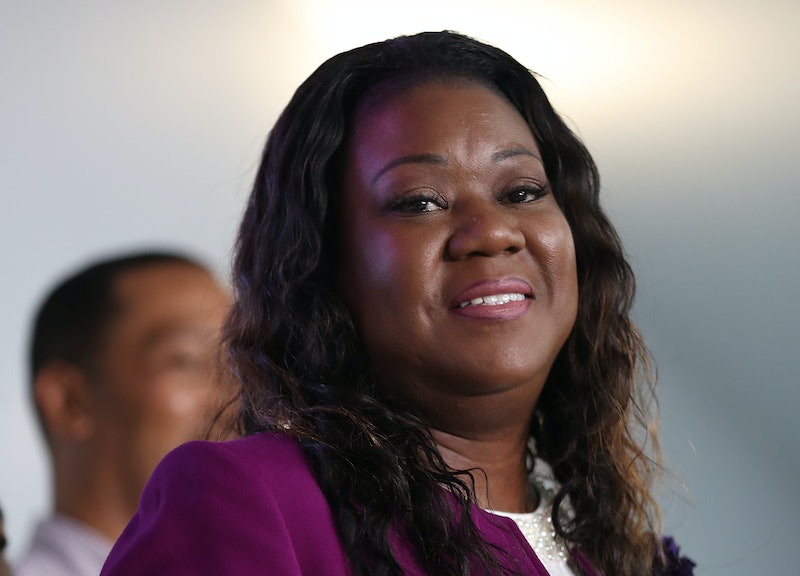 The world knows Sybrina Fulton as the mother of Trayvon Martin, but she wants the world to know that she is more than the tragedy she has endured. She is a mother to her other son, Jahvaris Fulton; a person of faith; a lover of comedy; and now, a candidate for public office. Fulton announced in May that she is running to fill one of the five open spots on the 13-member Miami-Dade County Commission.

This “Mother of the Movement” — she’s one of a group of women whose African American children have been killed by police or gun violence — is no stranger to local government. Fulton spent 24 years working in county government in Florida, largely on housing and urban development. She tells Bustle she wants to use the platform of county commissioner not just to address gun violence, but also affordable housing and economic development. And though it is a local race, Fulton’s national profile has garnered her some big endorsements: Hillary Clinton and Sen. Cory Booker are both backing her campaign.

Bustle’s Alicia Menendez spoke with Fulton about her decision to run, what it’s like to make the transition from activist to candidate, and what she has learned about turning anger into action.

Alicia Menendez: How did you come to decide to run for this office?

So I watched for a while, and I was one of those people that, of course, complained about politicians. And I said, "Well, let me give it a shot to see how I can make a positive change in my own community," and so that's why I decided to run. I wanted to just be a different face, different ideas, and not be a career politician. I want to be the voice of the people.

AM: Because of your role as a Mother of the Movement, many people think of your activism in the context of gun violence and see that issue as one that's determined at the federal level. So, why run for county office rather than run for Congress?

Everybody has a storm. It's how you weather that storm that makes you who you are.

SF: This is my first shot at politics, for one, and I wanted something that I was familiar with and running for Miami-Dade County commissioner is certainly something that I'm familiar with. I worked for Miami-Dade County for 24 years as an employee prior to the tragedy of losing my son. I'm from district one, the district that I'm running for. I was born in that area. My great-grandmother lived there. My grandmother lived there, and my mother lived there. I went to elementary, middle school, high school, and I graduated from a college just right there in the district. So as a resident of Miami-Dade County, I just felt that I was more connected with local government.

AM: What types of reforms do you want to see at the local level that we're not talking about?

Economic development is very important to me. I love to see new developments come to a community, new businesses come to the community. I love to see small businesses, and people just being inspired to start their own business. But it all goes back to crime. If you're not feeling safe in your community, you're not going to go to these fancy places, these fancy restaurants, and golf course, and casinos, and hotels. You're not going to frequent those places because you're in fear and you're going to just want to stay in your house and make sure you have adequate security. You're going to make sure that you have the right locks on your doors, and you have security cameras, and you have an alarm system, and see all of these things in place. Because we are afraid. We feel safe in our houses, and I want people to feel safe again by going out and frequenting these new developments, and these new things that are happening inside Miami-Dade County. People just don't feel safe right now.

I love comedy shows. I love white wine. It's so much about me that people don't know.

AM: What's been the biggest learning curve going from being an activist to a candidate for political office?

SF: That it's a lot of work. It's very time consuming. I run the Trayvon Martin Foundation. I'm a founder, but I also am the CEO of the foundation and the executive director. I mean, all of those things wrapped up in one. We plan our program, we raise our money. Everything that it entails for a non-profit organization, that's what we're doing. I was constantly doing that along with my professional speaking. Now that I started campaigning, I actually came out in May 20th of this year and I got off the ground in June, and started going to meetings, and started meeting people, and things like that, and it's very, very, very time consuming. Once I make it into that seat, I want to talk to other people that are interested in running because I want them to know that it is very time consuming.

AM: What did receiving Hillary Clinton's endorsement mean to you?

SF: I had a conversation with her, and she's very proud of the work that I'm already doing. She's very proud of my decision to run for office. She supports me 100% and it was just very overwhelming. I'm glad to know that she supports me. It's other people that support me as well, and you'll probably see them starting in January to start coming out to show their support, but I'm just honored to have her stand behind me.

AM: In the other interviews I've read with you, I get the sense that the tragedy you've endured has had the odd effect of flattening your identity to one dimension. How do you want people to know you?

SF: Well, I say that they know me in one circle as being Trayvon Martin's mom and that, indeed, I am Trayvon Martin's mom, but I also have another son. I have Jahvaris Fulton, so I have one son in heaven and I will have one son here on Earth. I'm constantly working, not only for my son that's in heaven and my son that's on Earth, but other young people as well. I also want people to know that I did 24 years of service in the public service capacity helping others. I worked in the airport and transportation, and I worked in housing as a hearing officer, and things like that.

People, they just see me as Trayvon Martin's mom, not even saying the name Sybrina Fulton, but they just know me as Trayvon Martin's mom. I just want them to know that I have another son, that it's so much more to me. I'm a college graduate, I'm a member of Delta Sigma Theta. I'm a church member, and I'm a believer in Jesus Christ. I love comedy shows. I love white wine. It's so much about me that people don't know. I love purple, and now I love red because of the Deltas. I'm a sister. I'm a mother, I'm a daughter. I'm just a whole bunch of other things. But, right now, I'm in that bubble. And as of August 2020, I'll be a politician.

AM: What is your advice to someone about how you take your anger and turn it into action?

SF: I would certainly tell them before they turn their anger into action, they have to wrap their head around the tragedy that has happened to them. Once you get past and understand the things that have happened to you and you move on past the storm that you're living — because I just feel like, when my son got shot and killed, that was my storm. Everybody has a storm. It's how you weather that storm that makes you who you are. I just believe that it's not necessarily about if you lost a son, or you lost a daughter, you lost a husband, or you lost a twin, and all of these different things people get wrapped up around. It doesn't matter if it was a police officer or a civilian, or was it a black person, or white person, or Hispanic person. None of those things matter.

I'm writing my second book right now and that's what it talks about. It talks about me moving to my next chapter. If you wrote a book about the life of Sybrina Fulton, you could not leave out chapter five where I lost my 17-year old son to senseless gun violence. Did my life stop at chapter five? Well, for a brief period, it did. Did my heart ache and hurt, and disappointment, and sadness, and grief, and all of those things in chapter five? Of course.

But what did I do in chapter six, seven, eight, nine, 10? That's what's important. That's what I want people know: moving to the next step, and knowing your purpose in life, and knowing what you want to do to try to make positive change.