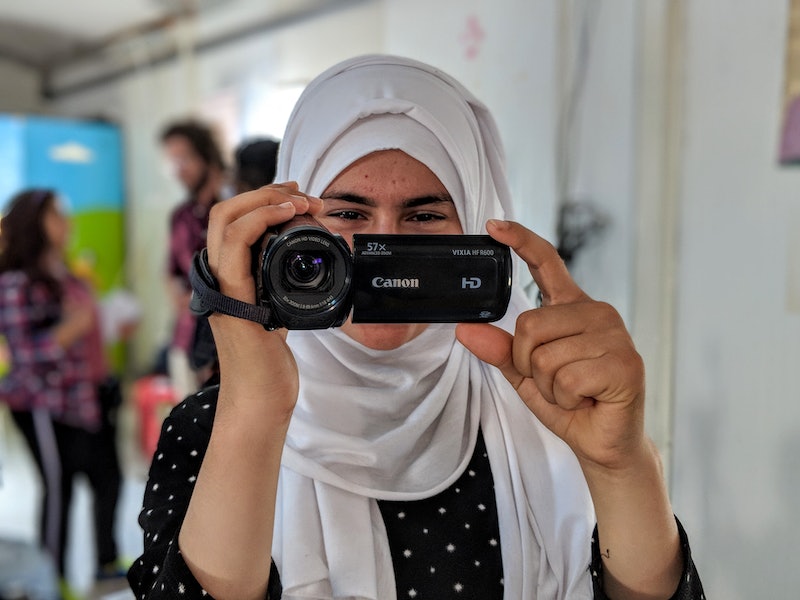 Asma Abdel Rahman Sleiman stands out among the 40,000 residents of Jordan's Azraq Refugee Camp. The 17-year-old is fairly well-known among teenagers there as the first girl at the refugee camp to ride a bike. That simple act flies in the face of gender taboos that keep other young women her age either off bikes completely, or else perched side-saddle while a man steers and pedals. Now, Sleiman's telling her own story in a documentary-style film that's shot, produced, and directed by other girls at the refugee camp.

"I wanted to do this film so that I can show people that it’s OK for an older girl, not just young girls, to ride a bike," Abdel Rahman Sleiman tells Bustle through a translator. She says she wants families to see the film and allow their own daughters to do the same.

With the help of CARE International, a humanitarian organization, and the film company Epic Digital, and with financial backing from 21st Century Fox, Abdel Rahman Sleiman's film will reach a global audience through the program's website — and possibly even through international film festivals. She's one of more than a dozen girls participating in the second Azraq Film School in as many years, after a pilot program showed that camera equipment, along with storytelling classes, can yield powerful results in young refugees' hands.

CARE, which runs a community center in Azraq Camp alongside other global humanitarian groups, is looking to broaden out its relief work for young people to include creative and skill-building opportunities. The film school is one way aid workers are teaching teens the digital skills they'll need to thrive outside the camp's walls — and the storytelling refugees learn in the course empowers them in an environment where so little is under their control.

“They have so much content, but they don’t know how to engage and how to tell the story,” says 31-year-old CARE staffer Sara Rashdan, who lives in Jordan's capital city of Amman, about an hour's drive east of the refugee camp. The girls spend the first week of the course learning about filmmaking techniques like narrative arc and the difference between wide, medium, and close-up shots. Then, they're set loose during the second week — or as loose as a group of children can be within the refugee camp's 10-foot barbed-wire fencing.

As the Syrian civil war grinds on in its eighth year, humanitarian groups and international aid organizations are faced with the challenge of how to care for a group of people whose needs have changed with time. When Azraq Camp opened four years ago, displaced Syrians needed food, water, and shelter. Now, more than half of the camp's refugee population is made up of kids, and nearly 10,000 of them are school-age. Many have spent more than half their lives at Azraq Camp.

"If I were to listen to people’s shaming and what they say, I would never be able to do anything in my life."

"You need to create a path for them so they can seize opportunities for themselves, and so that they can take on the challenge of rebuilding their home country," says Charlie Grosso, the founder of Hello Future, a digital literacy program for young refugees that also teaches basic videography, photography, and mobile technology skills. "How are they going to possibly rebuild when they have no education, no skills?"

Life in the refugee camp is a far cry from the home Abdel Rahman Sleiman remembers in Syria. She smiles as she describes it: a farmhouse on the main road in town, surrounded by green fields planted with whatever vegetables were in season and filled with grazing cows, sheep, and chickens. The only people to talk to were her own relatives, a stark contrast to the organized "villages" that divide Azraq Camp's rows of corrugated metal shelters, thousands of which are packed side-by-side along 6 square miles of dirt.

"I don’t want the life that they have for themselves, and I know they wish they didn’t go through that. At least I’m more or less free."

Abdel Rahman Sleiman says that's why she started riding her bike in the first place: to get to the taekwondo practice offered on the other side of the camp, where she and her sisters are in a class of nearly all boys. But the image of Abdel Rahman Sleiman straddling her bike — a no-no for proper young women — fuels the rumor mill at the camp, which hosts many refugees from conservative parts of Syria.

"I just simply ignore them and continue doing what I’m doing," Abdel Rahman Sleiman says. "Because if I were to listen to people’s shaming and what they say, I would never be able to do anything in my life."

Abdel Rahman Sleiman isn't the only young woman in the film class who's breaking gender taboos. Afrah Khalid al Kayed, who's originally from Damascus, is one of the oldest girls in the film school at age 20. Some of the men who attend Azraq Film School's morning sessions — men and women take the course separately — are in their 30s, an impossibility for women of that age in Azraq Camp.

That's because Syrian women are traditionally expected to marry and start a family of their own after they finish school, limiting their opportunities outside the home. Khalid al Kayed tells Bustle that nearly all of her friends her age are married; some teens she knows are divorced with kids.

"I know that none of them wanted this and that their lives have completely changed," Khalid al Kayed tells Bustle through a translator. "Even I can’t talk to them and I don’t want the life that they have for themselves, and I know they wish they didn’t go through that. At least I’m more or less free."

She spends her days inside her family's metal shelter, waiting for her younger sister to come home from school. Khalid al Kayed and her older sister pose for selfies against the shiny aluminum walls and post them to the sister's Instagram account. During a break in filming, she flips through her phone, looking at screenshots of old posts (Wi-Fi is hard to come by) along with photos of her brother cuddling a cat. Tucked into the fabric folder she carries are a mini-calculator and tiny Polaroids of her with Hollywood actors who've come to visit the camp.

The days at Azraq Camp that aren't marked by visits from minor celebrities or film class go by slowly for the young women who live there. But for some, life inside the refugee camp is preferable to that outside its walls, where a majority of Syrian refugees in Jordan live. Jordan has officially taken in more than 670,000 refugees from its neighbor, but the Jordanian government says that the number is twice as high when factoring in unregistered Syrians. It's an overwhelming economic burden for Jordan, which is just about the size of Maine.

A web of organizations such as Save the Children and Mercy Corps provides services in the refugee camps, which are run by the United Nations High Commissioner for Refugees. Refugees outside the camps struggle to secure shelter, health care, and employment, but are able to leave when they want — a privilege that's only granted to refugees inside Azraq Camp with prior approval.

"To give them the mic, and to have them shape that story themselves and have it be told through their own lens, that’s the goal."

"So many of the participants have been here for half their lives, a third of their lives, and their entire world here is within the confines of the camp: their school, their recreation, their family, their shopping," McGowan says. "They’re forced to be creative within the confines that they have. So part of the storytelling training is looking at, how can you control your own narrative?"

Regina Bediako, a 32-year-old filmmaker with Epic Digital, is on board to mentor the girls.

"They tell their own story. We're hands off," she says. "Especially with underrepresented or marginalized groups, for so long other people have been telling their stories. So to be able to flip the script, and to give them the mic, and to have them shape that story themselves and have it be told through their own lens, that’s the goal."

After watching a few sample documentaries intended to help the girls taking the course decide which of their stories to film, they flagged one potential issue to their instructors. They asked whether all the stories had to have a happy ending.

"They wanted to know, like, what if we have a story and the main character has hopes and dreams that haven’t been realized?" McGowan says. "They really wanted to be able to tell those stories, too."