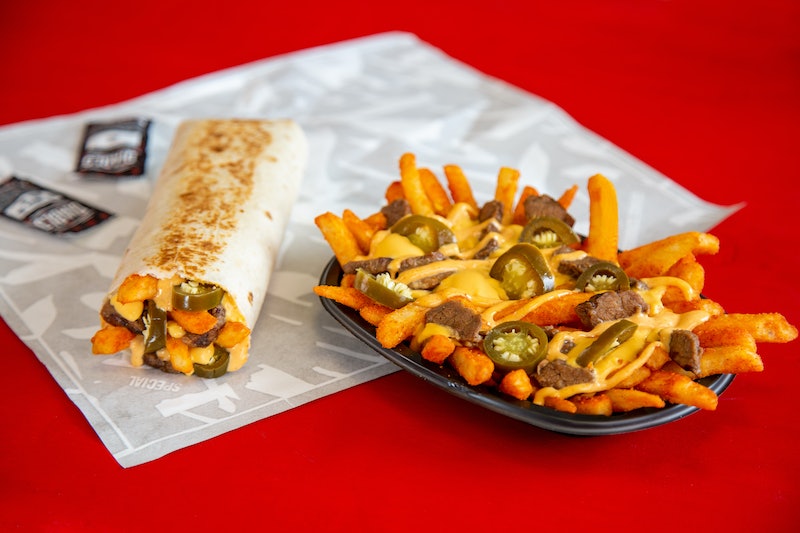 Friends, family, french fry lovers! Gather ‘round! I come bearing good fry news. Not only are Taco Bell’s Nacho Fries back, they’ve brought a salty friend: Steak Rattlesnake Fries. “What do those words mean together?” you ask. “Is it legal to eat rattlesnake?” you wonder, for the first time ever. “Wait,” you ask, already regretting the question. “Do these fries contain ... rattlesnake?” Fear not, french fry aficionados. I have the answers you seek. (...and none of the answers contain rattlesnake.)

The name Steak Rattlesnake Fries tells you ... almost nothing. You are probably more than familiar with “steak” and “fries” and even “steak fries,” but what in the Tex-Mex are “Steak Rattlesnake Fries”? Basically, they are a sing-songy way to say “spicy loaded fries.” Taco Bell’s new menu item is a basket of crispy fries topped with marinated steak, nacho cheese sauce, creamy jalapeño sauce, pickled jalapeños, and (despite its name) zero rattlesnakes. It is the acme of drunk food. It a match made in salty and spicy heaven and/or maybe hell. It is what comfort food eats when it is craving comfort food.

Starting Thursday, February 28, the Steak Rattlesnake Fries will be available nationwide for a limited time only. For $2.99, you can get the Rattlesnake Fries on their own or you could go absolutely buck wild and get them burrito-style, wrapped in a flour tortilla. It is 2019 and apparently, burritos can be anything.

If you aren’t familiar, Carolina Reapers are known as the hottest peppers in the world. The Scoville scale, which measures spiciness, puts the pepper at 2,200,000 SHU (Scoville Heat Units). For context, a jalapeño measures at 3,500 to 8,000 SHU. So, the Carolina Reaper is more than 200 times hotter than that. Suddenly, my mouth is...on fire.

Unfortunately for the adventurous eaters (and fortunately, for your taste buds), it doesn’t look like the Reaper Ranch Fries will be joining the Taco Bell menu as of yet. So, you’ll just have to make do with the spicy french fries named after a rattlesnake.

The Steak Rattlesnake Fries seem to be riding on the non-rattling coattails of the popular Nacho Fries. If you didn’t get to try the Nacho Fries the first two times around, Taco Bell has brought them back for a third limited-time offering. If you’re wondering what Taco Bell’s Nacho Fries taste like, apparently they are well worth their $1.29 price.

The Nacho Fries are your standard fries spiced with a “bold Mexican seasoning.” They come with nacho cheese dipping sauce because hi, hello, of course they do. You can also upgrade to the Supreme Nacho Fries, if you want to live your fry life to the fullest, and get your seasoned Nacho Fries topped with nacho cheese, beef, pico de gallo, and sour cream.

Taco Bell isn’t the only fast food joint upping their fry game (or, in Taco Bell’s case, getting into the fry game). Earlier this year, McDonald’s introduced Bacon Cheese Fries as a limited-edition menu item. They are, as the name suggests, McDonald’s classic fries topped with cheese sauce and bacon bits. Wendy’s has had their Baconator Fries (fries topped with cheese sauce and bacon) on the menu since 2015. Both are successors to the loaded fry champ: In-N-Out’s Animal Style fries, which come loaded with In-N-Out’s signature sauce and grilled onions. What I’m saying is the world is your loaded french fry basket.