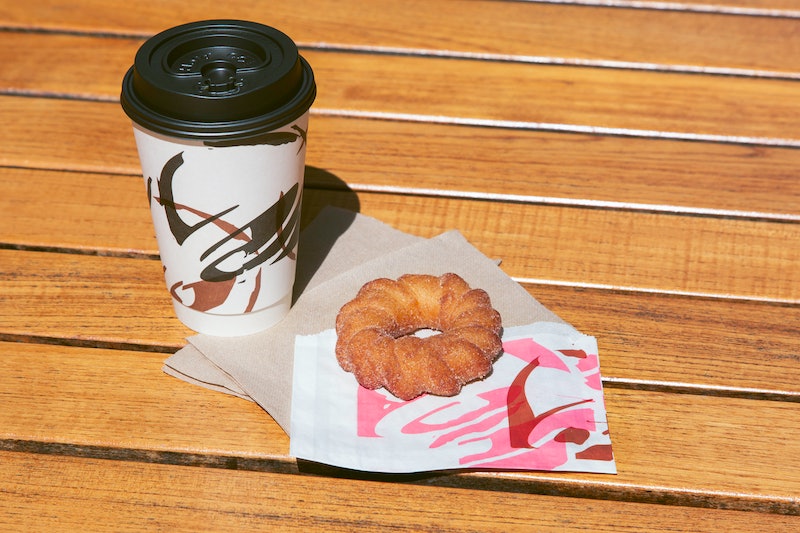 Churros are having something of a moment. There are rainbow churros and unicorn churros and churros in cereal form. It feels offensive to such a perfect yet underrated dessert to call this a mere “moment” — a churro movement is long overdue. However, if this means the churro will finally be ushered into mainstream dessert culture, I will play along. So, join us, won’t you? We’ve been here the whole time, proudly waving our cinnamon sugary, deep-fried dough batons.

You know a moment is hitting its peak when Taco Bell says, “I bet I could do something with that.” Enter, Taco Bell’s new Churro Donut. It’s a churro. It’s a donut. It’s a combination of two perfect sweet treats supporting each other. Desserts helping other desserts is what will bring us all together! Also, it is it exactly what you expect it to be: a churro shaped like a donut.

Taco Bell’s Churro Donut kind of looks like a french cruller donut, swapping out a standard glaze for a cinnamon sugar dusting. Per a press release from Taco Bell, the Churro Donut takes “a warm, circular churro, deep fries it to a crisp golden brown then dusts it in cinnamon sugar.” It’s almost as if the word “donut” is there to help guide the churro into foodie trends. Like the donut is vouching for the legitimacy of the churro. “It’s cool,” the donut says. “The churro is with me.”

Starting Thursday, April 4, the Churro Donut will be available during breakfast hours for just $1. That isn’t a typo. You can get a delicious and perfect dessert for just one human, American dollar. There are so few good things you can still get for a literal dollar. You have to pay that much just to get past a terrible level of Candy Crush you’ve been trying to beat for a month. Now, you can save that dollar for something that is actually sweet and edible: the Churro Donut.

Of course, like all good things, there is a catch: it’s currently only available in Kansas City, Missouri. (Cues cries of agony, betrayal, and serious thoughts to move to the Midwest.) Even in testing locations, the Churro Donut will only be available until early May. Hopefully, the Churro Donut aces its tests and everyone in the greater Kansas City area Churro Donuts the crap out of themselves for the next month.

Lest we forget our savory brethren, there are two other new menu items joining the Churro Donut. We have the Double Beef Quesarito. Ms. Quesarito is “a burrito filled with seasoned beef, seasoned rice, cheddar cheese, sour cream, and chipotle sauce all wrapped inside a seasoned beef quesadilla.” She is also only available in select testing locations (sup, Charlotte, North Carolina?) for a limited time only.

Last but not least (unless you’re comparing it to the Churro Donut then, yeah, sorry bud, you’re the lesser food item), Taco Bell is also releasing the Loaded Nacho Taco. I’m sure you’re wondering what those words even really mean together. Does Taco Bell just pull food words out of a hat at random and then put them on the menu? Wouldn’t we all still eat it if that were the case?

The Loaded Nacho Taco is “a tortilla filled with seasoned beef, nacho cheese sauce, lettuce, cheddar cheese, and Southwest Seasoned Chips.” Basically, Taco Bell is like, “We know you don’t want to have to choose between nachos and tacos. So, now we’re fully enabling you.” The Loaded Nacho Taco is also only $1 AND available nationwide.

God bless America and all our frankenstein-ed food creations.