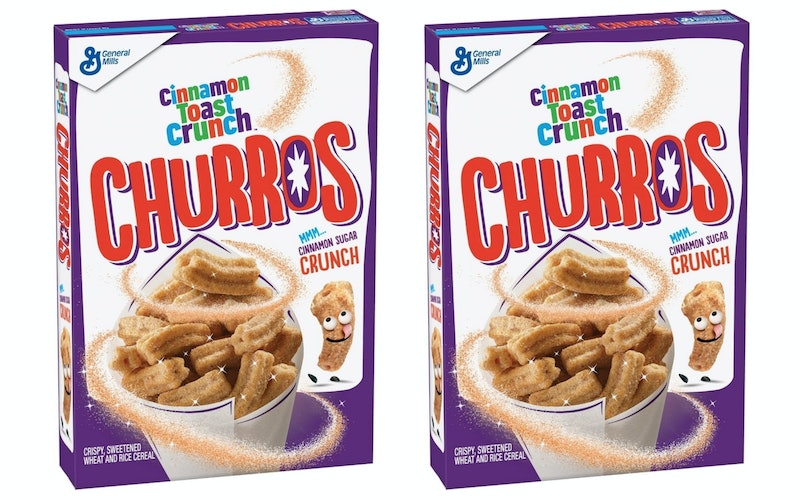 Taking a delicious sweet treat and making it smaller so that it can be put in a bowl and covered with milk is not going to appeal to everyone, but for those who it does, there are now Cinnamon Toast Crunch Churros. Is this for breakfast? Is it for dessert? Would it be best to eat these dry right out of the bag? The choice is yours, but that last option should not be overlooked.

The cereal from General Mills is made of wheat and rice, shaped like tiny churros, and covered with cinnamon and sugar. So, yeah, they're pretty much the same as regular Cinnamon Toast Crunch, but shaped differently and apparently a little crunchier. And there's nothing wrong with that since Cinnamon Toast Crunch is already one of the most popular cereals out there. Cinnamon Toast Crunch Churros hit shelves on Monday, December 17 with the suggested price for a mid-sized box being $3.99 and a family-size $4.99.

Now, if this is all sounding very familiar to you, there are two reasons for that: Cinnamon Toast Crunch Churros have already existed in another form and another churros cereal was on the market in the past.

In October, The Impulsive Buy reported that Cinnamon Toast Crunch Churros Snack Packs were spotted in the supermarket by someone named Katie K., along with Reese's Puffs XL and Cookies 'N Crème Fillows Snack Packs. Around the same time, Cerealously also reported the news, noting that their info about the snacks being spotted came from Katie K., too. (Well done, Katie K., who shops at Hy-Vee!) Katie said at the time that the snacks were "Like Cinnamon Toast Crunch but with something that makes them taste more fried like churros." Similarly, a press release about the new cereal boxes — not Snack Packs — says "you can count on each bite staying crunchy in milk."

As for that other churros cereal, according to Cerealously, Post released Mini Cinnamon Churros cereal back in 2011, which looked like a churro up into little circles. Cerealously reports that this cereal was on shelves for three or four years. So, if you miss those, it sounds like the new version of Cinnamon Toast Crunch could be a good, actually-shaped-like-churros replacement.

In addition to Cinnamon Toast Crunch Churros, General Mills also announced two other products on December 17. Fruity Lucky Charms keep the usual marshmallows, but switch out those sweet cereal bits for fruity sweet cereal bits. This one will be available in select stores starting in December and released widely in early 2019. Then, there is the re-release of Chocolate Toast Crunch, which features chocolate and cinnamon. Like the Cinnamon Toast Crunch Churros, Chocolate Toast Crunch hit shelves on Monday and have the same suggested price.

Now that you've had a brief history of churros-flavored and shaped snacks (and there really is more where that came from), the only thing left to do it actually try them. Or to go get actual churros. Whatever floats your boat.