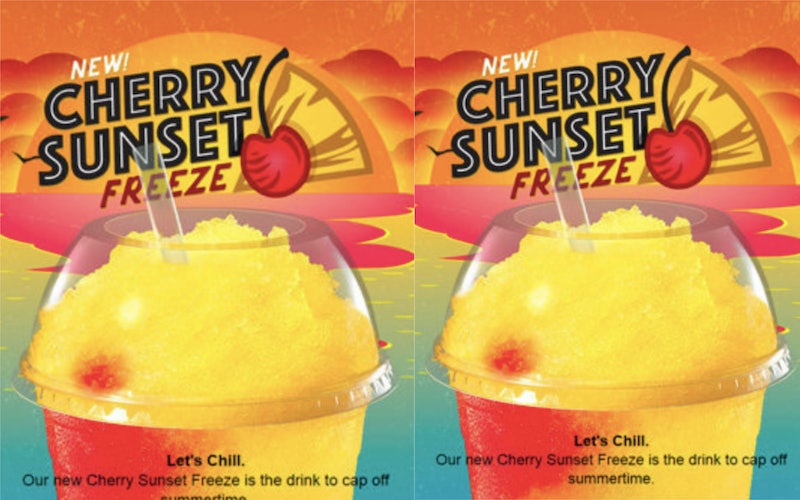 According to Taco Bell's letter, "You were like a mermaid to me — a fantasy capable of slipping away at any time. I tapped you lightly on your perfectly bronzed shoulder."

According to Taco Bell's Letter, the Cherry Sunset Freeze is "a frosty pineapple drink with swirls of delicious cherry flavor woven throughout." The letter also explains, from the writer's perspective, that it "cooled my bones, calmed my heart, and helped me remember why summer is so awesome anyway — it’s the season where love lives around every sand dune."

Drinking a Cherry Sunset Freeze might not lead you to meet "an angel goddess of summer" at the beach, but, being frozen, it could probably cool your bones, too. And if you like pineapple and cherry, you just might be a fan.

The drink is currently available at Taco Bell locations for $2.39 for a regular and $2.59 for a large. The full nutrition facts and ingredients list are available here.

According to the Taco Bell fan site Living Más, the new Freeze is replacing the Watermelon Freeze, which rejoined the Taco Bell menu back in April for summertime only. Obviously, it's a watermelon-flavored frozen drink, but it also features edible candy seeds.

Taco Bell has two other Freezes on the menu at the moment. There's the Mountain Dew Baja Blast Freeze, which is the blue, tropical-flavored soda in a slushy form. There's also the Strawberry Skittles Freeze that allows customers to "drink your favorite Skittles flavor." You know, if that's something that sounds appealing to you. Maybe your favorite is lemon. If so, you're out of luck.

Clearly, different Freezes are something the chain cycles in and out. Taco Bell previously even tested rosé Freezes at select locations. The drink was called the Berry Frosé Twisted Freeze and was a strawberry-flavored slushy mixed with rosé wine. There was also an alcohol-free version simply called the Beach Berry Freeze. When it was introduced in the summer of 2018, it was only available at two locations, the Taco Bell Cantinas in Newport Beach, California and Chicago, Illinois. And, unfortunately, it hasn't come back since then. More Taco Bella Cantinas have been opening up, so maybe it'll be back next summer.

For now, enjoy your Cherry Sunset Freeze while you can. Soon, it will be off the menu and, in a lot of places, too cold to drink one, anyway. Or, to quote Taco Bell's dramatic letter about the beverage, summer will have "vanished like a seashell swept back into the sea."