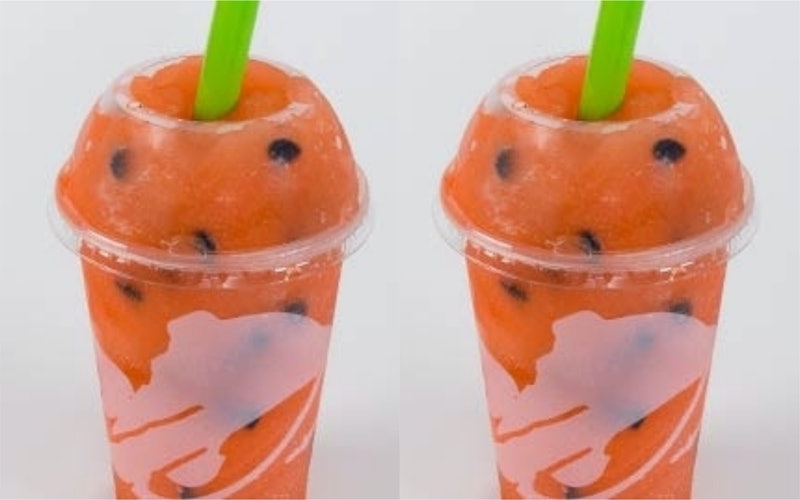 There are some sure signs that summer is coming. The abundance of pool floats and fruity cocktails that suddenly make an appearance, the early signs of rising temperatures, and the end of the school year approaching, increased boob sweat — they're all big things that say "summer." But more than that, more than any of that, we have definitive proof that summer is almost upon us. Taco Bell's Watermelon Freeze has returned. That's right — it has risen.

Per a post from Taco Bell announcing the return, the slushy, frozen, tangy, sweet cup of greatness is now back at Taco Bell and available for just $2.69. It's available for a limited time only, presumably as long as summer vibes manage to stick around. Complete with candy seeds and a giant green straw (which not only allows you to suck up the seeds but also delivers on the watermelon aesthetic), it's sure to delivery a tasty treat and a summer feel all in one. To be honest, Taco Bell seems as excited about its return as I am.

"A frosty, freeze-y watermelon drink with candy seeds that won’t sprout a watermelon patch in your stomach (really, go on and eat ‘em) — it’s something that goes great with the sweetness of summer months. In our humble opinion, the Watermelon Freeze is the best thing since sliced watermelon," the company wrote in the post dedicated to the return of the drink. "Refreshingly sweet and super snap-worthy, it’s the drink everyone wants to be seen with as soon as those temps start rising. Drink a Watermelon Freeze in the sunshine, enjoy one on the beach, grab one on the hottest day of the year then stop into Taco Bell and order four and bring them to your friend’s pool party and refuse to share. Don’t worry, they’ll understand."

I don't know if they'll understand, but I'm pretty sure they'll want to grab some for themselves.

When it's blisteringly hot out, a drink so cold it may or may not freeze your brain feels like the ultimate treat — and adding a watermelon twist just makes it even more delicious. It's no surprise that people can't wait to get their hands on it. Because even if it's not hot and sunny where you are yet, with the right summer drink you can pretend you're somewhere close to the equator and live in your own summery daydream.

If watermelon isn't your flavor of choice, there are a whole lot of other summer drinks that have started to make an appearance. The Strawberry Dollarita is the Neighborhood Drink of the Month at Applebee's, if you want a real bargain. Or you can go for something super on-trend and grab yourself a bottle of Aldi's Pineapple Mimosa that comes in at less than ten bucks and is basically screaming to be included in your next summer fete (and Instagram post). Or you can think a little outside the box with Cape Line's sparkling cocktails line — including a blackberry mojito, which looks like an unexpected but delicious flavor combination. The summer drinks certainly know how to turn up.

Taco Bell fans will remember the Watermelon Freeze from summers of yore and, if the internet is anything to go by, they're so excited to have it again. Cold, sweet, pretty, and with a sprinkle of candy — it's everything you could want from a summer drink.