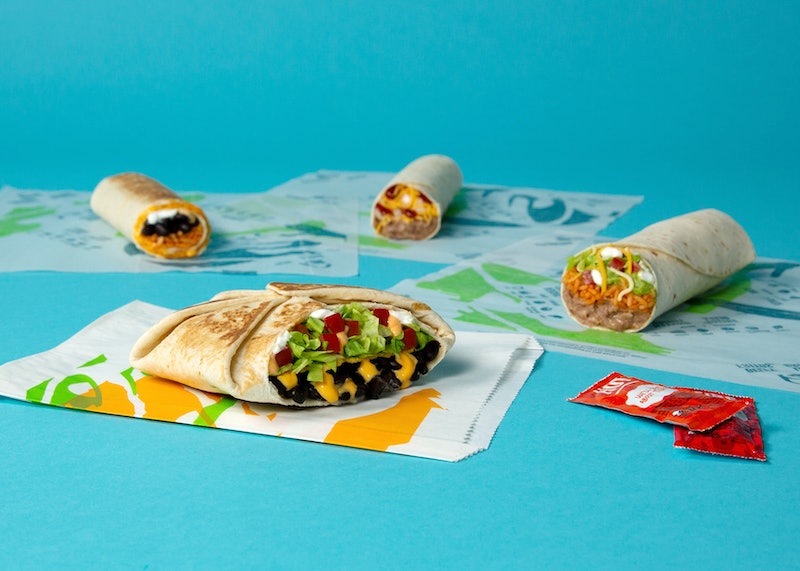 Eating fast food as a vegetarian has gotten so much better in recent years, but there's still a long way to go. Even though we've come so far from the days when we were just living off of sides and trying to piece together a meal, it still can sometimes be confusing figuring out what you can actually eat. But Taco Bell, a favorite among veggies, is making it even easier. They've gone beyond the Taco Bell vegetarian menu and on Thursday, we'll finally start seeing the first-ever vegetarian menu boards at Taco Bell.

So mark Sept. 12 in your calendars, because this is a big day for veggies everywhere. Not just as pop-up or a one-off, they're coming to restaurants around the country. You may remember the testing of the vegetarian menu in Dallas earlier this year, but this is the full roll-out. Veggies, we've finally got our own board — and it looks glorious. It features some classic faves along with some new vegetarian options.

Keep your eye out for new treats like the Black Bean Crunchwrap Supreme and the Black Bean Quesarito. But if you like the old standards — like the classic Bean Burrito and 7-Layer Burrito — don't worry, you'll still find them. And everything that you see on the new vegetarian menu is American Vegetarian Association-certified, so you can eat up without any worry. Time to load up on burritos and never look back.

But it goes beyond the menu board. The company explains that they actually have 13 AVA-certified menu items and 36 certified vegetarian ingredients (26 of which are vegan) — and that there are so many ways to customize their whole menu if you're looking to make something meatless. So look at the vegetarian menu board, but also keep an eye on the little "V" symbol elsewhere on the menu — and don't be afraid to experiment to make the perfect veggie treat.

So many vegetarians and flexitarians will be welcoming this move — more options are always better. But it's even bigger news in light of Taco Bell's menu changes that we've seen lately. Taco Bell is removing nine menu items this fall, including the Cool Ranch and Fiery Doritos Locos Tacos, which was a major change for fans. But there have been some exciting changes as well, like the new Toasted Cheddar Chalupa — a delicious Chalupa with cheese baked straight into the actual shell. It's a cheesy, cheesy heaven for anyone who just can't get enough.

But, out of all the changes Taco Bell has seen recently, I have to say that the Taco Bell vegetarian menu sounds like the most amazing. Yes, "The Bell" — a Taco Bell hotel — was pretty innovative and impressive, but the veggie menu will be so transformative for many major Taco Bell fans. Eating vegetarian has become so much easier over the years, even when having fast food, but it's still unusual to get your own menu. So keep an eye out for the menu board the little "V" — and don't be afraid to mix and match. Taco Bell is your (vegetarian) oyster.