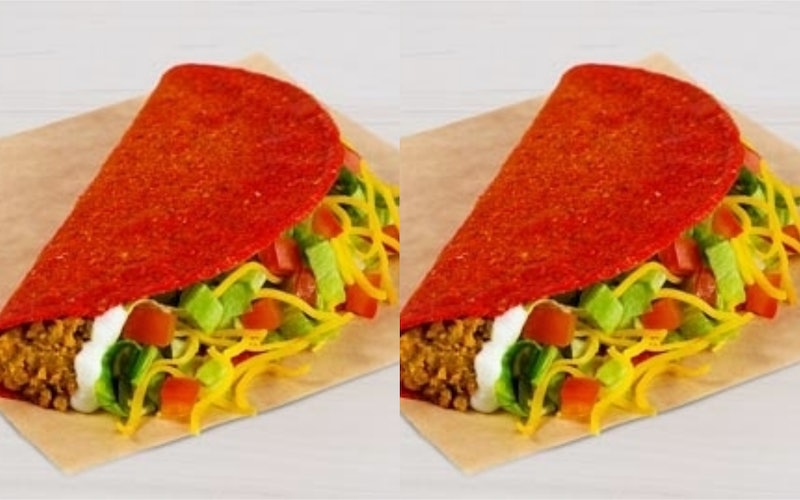 As summer turns to fall, many of us start to think about the big picture. Where we've been and where we're heading. Transformation. Evolution. Time passing. And, of course, Taco Bell's new menu. Because it seems as though Taco Bell has had its mind on the changing seasons just as much we have — and there are big changes coming. Nine Taco Bell menus items are being removed in a massive menu revamp — including, I'm sorry to tell you, two different Doritos taco options.

Say goodbye to the Cool Ranch and Fiery Doritos Locos Tacos. I know — it's hard to imagine ever getting rid of anything Dorito-based, but Taco Bell is making a bold choice and, I can only assume, they have their reasons. (Your regular Doritos Locos tacos, though, are safe.)

The company announced the change on Twitter and in a blog post explaining that you'll be separated from your old faves on Sept. 12, when the menu changes will come into force. In addition to the two varieties of Doritos Locos Tacos, you'll be losing the Beefy Mini Quesadilla, Chips and Salsa, the Chipotle Chicken Loaded Grille, Double Decker Tacos, the Double Tostada, the Power Menu Burrito, and the XXL Grilled Stuft Burrito.

Now, it's a lot to process — if you need to take a beat or have a moment of silence, that's totally understandable. We're far more used to Taco Bell introducing new menu items rather than taking them away. But there's a little more change coming your way, because Taco Bell is also changing up the menu with new combo options. The idea is to make ordering even easier but, well, some of the response on Twitter shows that people are not excited about the change. People are already mourning the loss of their favorites — and my thoughts and prayers go out to them.

You take away people's favorite Taco Bell menu items and you take their comfort, their stability, their hope. You change their combos — and their whole world goes upside down.

There's no doubt that Taco Bell fans are hardcore — in fact, many fans have their favorite Taco Bell hacks. And some of them go even further with a ton of Taco Bell merch, including some truly amazing hot sauce phone cases and a collaboration with DIFF Eyewear to raise money for charity. But for the really dedicated fans, you can even host a party in Taco Bell — and a few lucky fans got to spend the night in a Taco Bell hotel. Of course, the real sign of your devotion to the brand is getting married at a Taco Bell in Las Vegas, but I can understand why that would be reserved for the few and the bold. Many of us would just not be brave enough for such a commitment, but hats off to those who do.

So with such a dedicated fan base, it's easy to see why any changes to the Taco Bell menu would be a dramatic shift. You have your favorite orders, your favorite combos, your favorite anything-made-with-Doritos. It's going to be a tough transition. But we're all in it together. And cheese, rice, and beans will get us through — they always do.