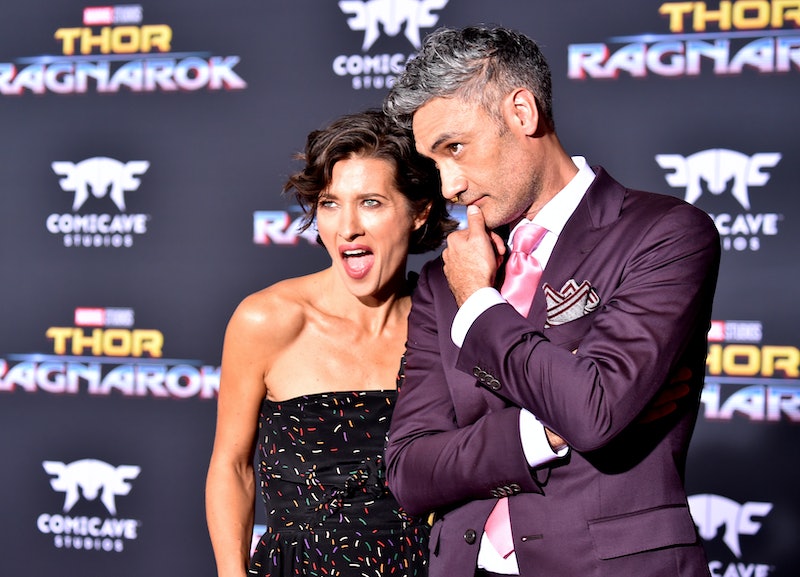 Though she currently isn't as well known as her husband, Taika Waititi's wife Chelsea Winstanley has been an integral part of many of the projects that made him famous, including the cult hit What We Do in the Shadows. The power couple's latest collaboration might bring her further to the forefront, as Jojo Rabbit is already getting serious awards buzz. In fact, Winstanley, who is one of the film's producers, might just walk away with her very own Best Picture Golden Globe.

The film follows lonely German boy Jojo, whose only pal is his imaginary friend Hitler (played by Waititi himself). Jojo's world changes after he discovers his mother is hiding a Jewish girl from the Nazis. The film is up for two awards at the Globes — lead actor Roman Griffin Davis is nominated for Best Musical or Comedy Performance, and the movie itself is up for Best Motion Picture - Musical or Comedy. The latter prize is awarded to the winning film's producers, meaning Winstanley could walk away with a Golden Globe.

Winstanley has already won a number of international awards for her producing and directing work, including Berlin Film Festival's Crystal Bear for the short film Meathead, Toronto Film Festival's Midnight Madness People's Choice Award for What We Do in the Shadows, and Hong Kong Film Festival's Firebird Award for the short film Night Shift. But winning a Golden Globe would be an enormous boost for Winstanley and her work — and with the Golden Globes preceding the Oscars, a win there can draw Academy attention to and raise the profile of films and actors up for Oscar consideration.

Winstanley took a break from directing after the birth of her two children with Waititi, Te Hinekāhu and Matewa Kiritapu. Though she loves being a mother, she told Now To Love in June 2018 that she's more than ready to refocus on her career. "I have to recognize I need to get back on that because it brings me joy, as well as having children. It's difficult, but I've had to go, 'I can't just be a full time mum any more.'" She's insistent on building her own career distinct from her husband's — though the two met through work and have had plenty of success together, Winstanley realizes she needs to establish her own voice and direction, "otherwise I'll always be 'Taika's wife,' or 'I make films with Taika.' I didn't make films with Taika before I met him, so I don't need to after!"

Winstanley recently completed the short film Forgive Me, which premiered at TIFF's ImagiNative festival. The film's serious tone echoes her pre-Taika work, like her contribution to Waru, a segmented film centered around a young boy's death and neglect. It's a starkly different tone from her husband's films, which Winstanley described to NZ Herald as irreverent. "I couldn't make a film like him. That's not where I'm coming from, and I'm trying to take ownership of that. Going back to what I love, that truthful documentary stuff, basing my stories on truth. That's where my strength is." Whether or not she wins a Golden Globe this year, Winstanley is ready to dive back into telling the stories she's passionate about.