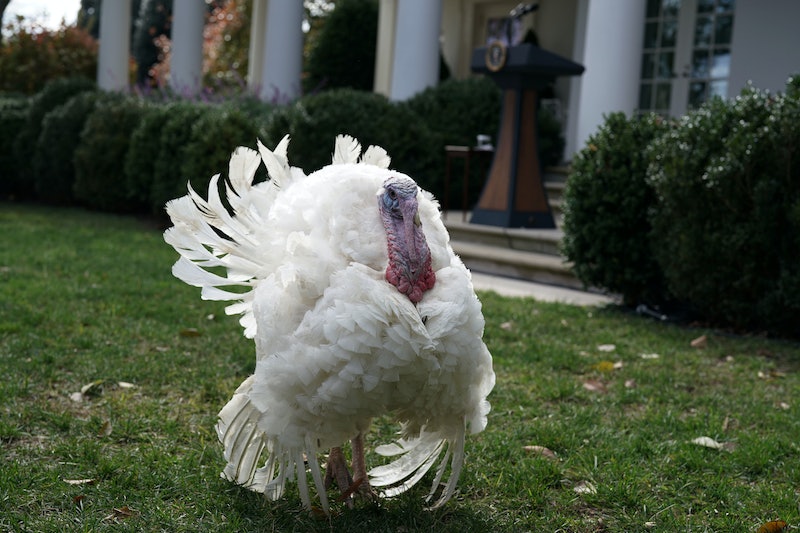 For many, the holidays can serve as a stark reminder that you have very different political views than your family. Even if you mostly see eye-to-eye, it can still be exhausting to talk about the current state of the world while trying to stuff your face in peace. A new poll from CBS News offers some reassurance — most Americans don't hope to talk politics on Thanksgiving.

While 45 percent of people don't really have an opinion on the subject, 40 percent want to avoid talking about politics during Thanksgiving dinner, according to the poll. Only 15 percent are actually looking forward to dissecting their family members' feelings about Donald Trump. Though slightly more Democrats hope to avoid the topic than Republicans, those wanting to bring up Washington D.C. on Thursday were in the minority regardless of their political party.

So, if you were worried about relatives bringing up the situation at the U.S.-Mexico border, the FBI's Russia probe, or the 2020 election, rest assured that they would probably rather talk about a lighter topic too. If politics does come up, though, know that it's perfectly fine to walk away if the situation gets too heated or stressful.

Americans wanting to avoid politics during the holidays isn't exactly new, but the feeling has spread. Last year, an Associated Press poll found that 20 percent of people were eager to broach the subject at Thanksgiving, while 40 percent didn't care either way. Around Christmas in 2016, 39 percent of U.S. families said they avoided conversations about politics, according to Pew Research's data. Democrats with a college degree were the most likely to say they discussed the 2016 election.

While some argue that everyone should talk politics over the holidays — David Graham wrote for The Atlantic last year that "President Trump’s ability to grab the spotlight and inject himself into so many facets of life makes trying to avoid politics practically futile these days" — it's really a personal decision. Sometimes having the same argument over and over just isn't productive. And for people who spend most of their time working around politics, one day away from the chaos is often much needed (don't be afraid to tell people this while shoveling pie into your mouth!).

That said, you shouldn't feel obligated to attend family functions on Thanksgiving if you know it will be chaotic or involve toxic family members.

“If you're at the point of considering skipping Thanksgiving, there's a good chance things are pretty bad. Think about the cost to you. Does it take you a week or more to recover from the toxic environment? Do you always come down with a terrible cold when you get home?" clinical psychologist Deborah Offner, PhD, told Bustle. "If you've answered yes to these questions or others like them, you need to take care of yourself [and stay home].”

Whether you end up discussing politics on Thanksgiving or not, make sure you're in control of your holiday mood — not the White House.