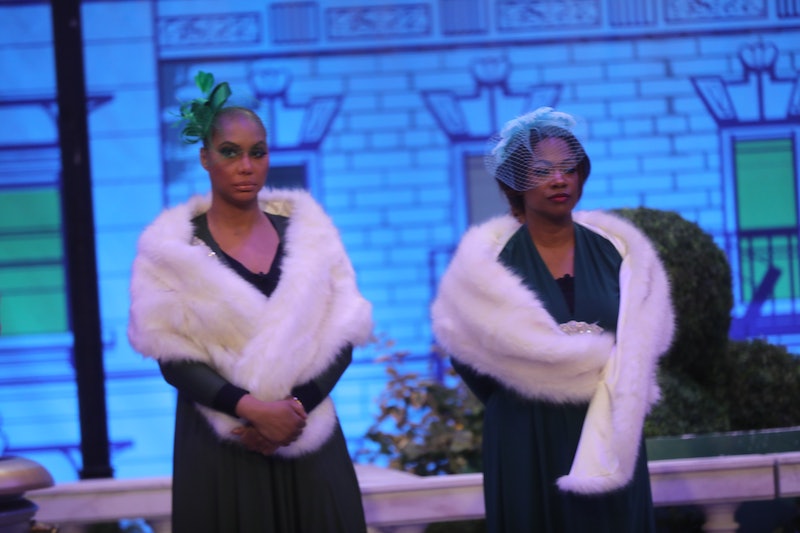 While the Feb. 11 episode of Celebrity Big Brother was mostly filler, we did get to see new camera footage and hear some interesting backstories about the contestants. For one thing, Joey Lawrence is a total neat freak and vacuumed the couches during his stay in the house, while both Tom Green and Ryan Lochte got real about their pasts. But perhaps the most heartwarming part of the episode was when we learned Tamar and Kandi became friends, despite starting off as rivals.

As a bit of background, both Natalie and Tom were evicted on the Friday episode, which means the Final Five consists of Ricky Williams, Lolo Jones, Dina Lohan, Tamar, and Kandi. The remaining contestants were visited by none other than Sugar Ray's Mark McGrath, who competed in CBB Season 1. Over glasses of champagne, they reminisced over the past few weeks on the show, discussing everything from Kato's sense of humor (which Ricky is decidedly not a fan of) and ​Anthony Scaramucci, whose stay on the reality show was brief, yet memorable.

However, Twitter was most tickled by Kandi and Tamar, who had a history before ever appearing on CBB. While they knew each other just by virtue of being in the entertainment industry, apparently they went on tour together about a year ago, where things went south. The tour they referred to was likely The Great Xscape Tour, which ran from late 2017 to early 2018 and included both Tamar and Monica, according to Billboard.

While Kandi is on The Real Housewives of Atlanta, she first became famous as a member of the '90s R&B group Xscape, which also included Tameka "Tiny" Cottle, LaTocha Scott, and Tamika Scott, per BET. And it seems like during the group's reunion tour, something went down to cause a rift between Tamar and Kandi. As a result, the two singers admitted to McGrath that they weren't excited to see the other at the start of the season.

However, CBB gave the two houseguests an opportunity to patch things up by forcing them to spend time together. And while they hashed out their disagreements toward the beginning of the season, which viewers saw briefly on Monday's episode, the two women gradually began to bond. As a result, the women now appear to be genuinely close friends.

The most touching moment happened when Kandi referred to Tamar as her friend during one of their conversations, which Braxton reacted emotionally to in a Diary Room interview. "I don't want to sound corny, but she called me her friend," Tamar said. "And for me, that was a big deal." The singer began to cry, which made Twitter's hearts explode.

And although we've yet to learn who won the previously started HOH competition, it looked like Tamar was having some trouble confronting her fear of heights. So whether or not she wins the comp or not, Kandi will likely have her back if Braxton gets put on the block. Whatever happens for the remainder of the competition, hopefully the two women will continue their friendship outside the Big Brother house. Perhaps they'll even record a song about their experience on the reality show, featuring a freestyle rap verse from Dina. After all, if Tamar and Kandi's friendship can survive Celebrity Big Brother, they can take on anything.