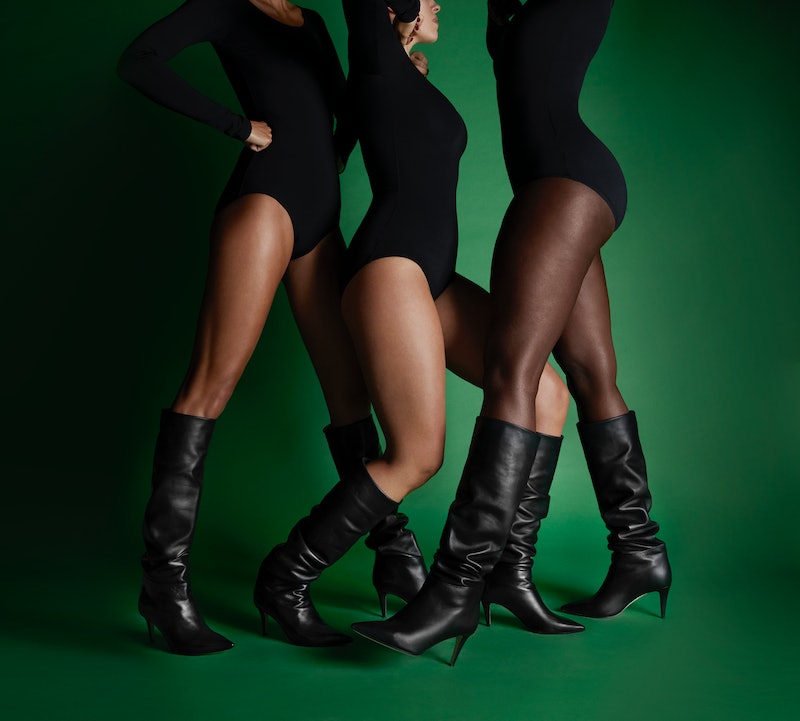 Knee high boots are a style that's rarely out of fashion, but the look isn't always accessible due to calf sizing. Those who are plus size, athletic, or others who have larger calf sizes can often find boot shopping difficult, but now luxury shoe brand Tamara Mellon has extended its Icon boot's calf sizes.

If you're not familiar with Tamara Mellon, you've still likely seen the brand's shoes. Duchess of Sussex Meghan Markle is a fan of the footwear and has worn several pairs. Just recently, you may have seen that CBD brand Lord Jones launched a cream specifically for heel pain. Yes, that was in collaboration with Tamara Mellon. See? You knew about the brand all along.

Now, Tamara Mellon has made it possible for more people to get their own Duchess of Sussex look thanks to a size expansion. According to the footwear brand, there are three new options for its classic Icon boots: small which fits a 14.25 inch calf, medium which fits a 14.96 inch calf, and finally large which fits a 15.75 inch calf.

In a press release, the brand explained that the idea for the calf size expansion came directly from its customers. Fans of the boot have been requesting larger calf sizes on social media and in reviews. Now the brand has delivered. Tamara Mellon, however, does say in the release that it knows the expanded sizing won't cover every calf size, but it believes the move is a step toward more inclusive options.

As of press time, the brand has not revealed if it plans to extend the calf sizing further with options behind the 15.75 inch extension. Plus, the Icon is currently the only boot that features the larger options.

Bustle has reached out to Tamar Mellon for commentary.

While you can't purchase Meghan Markle's Kindred Mid-Calf boot in an expanded calf size just yet, you can still grab a pair of the Icon boots to emulate her style. After all, it could just be a matter of time until she wears them.

Markle has donned at least five different pair of Tamara Mellon shoes since becoming the Duchess of Sussex including sandals, pumps, and boots. While she appears to have a preference for the brand's heels, with a boot that's championing more inclusivity, don't be surprised if you see the Duchess in a pair soon.