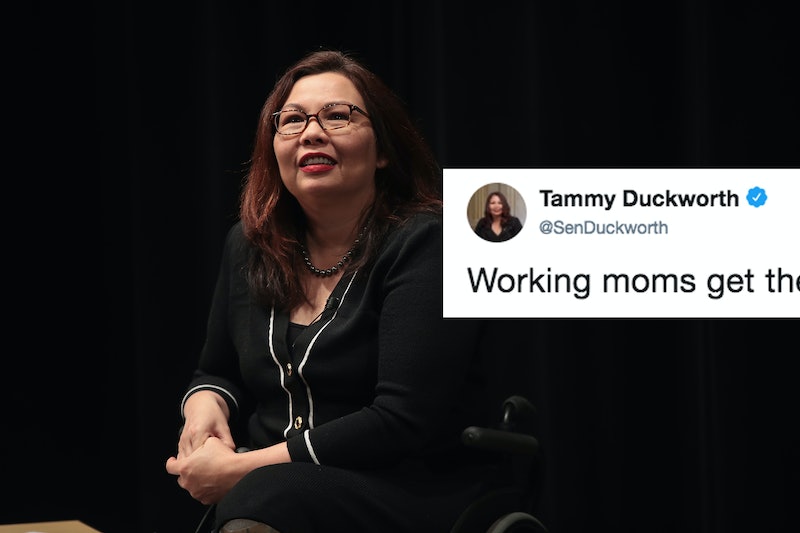 The first sitting senator to have a baby while in office is a pretty big deal. Even bigger, perhaps, is what she's accomplishing at the same time. On the same day that Sen. Tammy Duckworth gave birth, she also was busy at work. This tweet from Duckworth is something that all working women deserve to see. Even at the highest levels of government, you can keep your team on track, create change, and succeed — with children, or literally while having them.

While many politicians are sending Duckworth congratulations for the birth of her baby girl, Maile Pearl, one journalist was commending Duckworth — and implicitly her team — on remaining hard at work. "Before giving birth today, @SenDuckworth wrote to GAO saying that if Pruitt didn't know about the raises given to 2 of his aides, EPA violated the law," The Hill's Timothy Cama wrote, referencing a long letter she sent to the Government Accountability Office about the issues at Scott Pruitt's Environmental Protection Agency.

Duckworth (and hopefully her social media team) had the perfect response. She quote tweeted Cama and wrote, "Working moms get the job done."

Duckworth is in a special situation. There's no one who can fill in for her, and she's doing all she can within the system to have a baby and still represent the people of Illinois, too. The fact that she did it on the day of her daughter's birth is just next level.

Duckworth is doing an amazing and inspiring job as a parent and a senator. But in a truly equal society, no woman — or man — would be expected to work on the day their kid is born. Or the next three to six months. Every woman should be given a paid maternity leave, and every man a paid paternity leave, too.

Having said that, Duckworth is doing a pretty baller job of fighting to remake the rules and system so that they work for her as a senator and a mom. As the rules are written now, she's potentially going to have to choose between feeding Maile Pearl and voting. But Duckworth is working to change that.

"For me to find out that there are issues with the United States Senate's rules where I may not be able to vote or bring my child on to the floor of the Senate when I need to vote because we ban children from the floor, I thought, 'Wow, I feel like I'm living in the 19th century instead of the 21st, and we need to make some of these changes,'" Duckworth told CNN's Christiane Amanpour in March.

The Democratic leadership in the Senate has been supportive of the changes, she said, and will support a request for a rule change that would allow any senator — man or woman — to bring their child, biological or adopted, onto the floor during its first year of life.

For now, of course, Duckworth is focused on her happy family. She also wrote a Twitter update on Monday:

Bryan, Abigail and I couldn’t be happier to welcome little Maile Pearl as the newest addition to our family, and we’re deeply honored that our good friend Sen. Akaka was able to bless her name for us — his help in naming both of our daughters means he will always be with us. ... We’re also so grateful for the love and support of our friends and family, as well as our wonderful medical teams for everything they’ve done to help us in our decades-long journey to complete our family.

But she also understands how her issues on the Senate floor tie into those that all families face with newborns. "I mean, this is ridiculous. We're in 2018 and we're still dealing with this in the United States of America," Duckworth told CNN. "We're better than that. And, certainly, this speaks to the problems we have in this country with the need for family leave and certainly more family-friendly legislation in this country."

You can bet that Duckworth will be working for that — even while working with an infant.